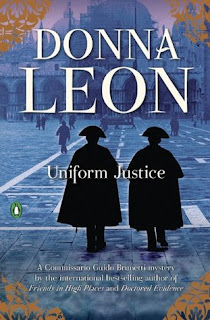 I've been quite happily plowing through Donna Leon's series featuring Commissario Guido Brunetti, enjoying his relationships with his family and his colleagues at the Questura, and especially enjoying all the descriptions of the food and wine consumed by the Brunetti family. But all of those pleasantries cannot completely disguise the fact that this is a very dark series.

The title of this twelfth entry, Uniform Justice, could be read in different ways. The "uniform" might refer to the military which in this story comes in for a bollocking by the author. Or it might be read as ironic: There is no such thing as uniform justice; there is "justice" for the rich and a much less salubrious "justice" for the poor. However you read it or interpret it, it is a thoroughly depressing view of Venetian society and, taken in a larger sense, Western society as a whole.

This book begins with Commissario Brunetti being called to investigate the death of a cadet at an elite Venetian military school. The young man was found hanging in the bathroom of his dormitory. The scene gives every appearance of having been a suicide, but Brunetti is naturally suspicious and keeps an open mind on the subject.

When he learns who the victim was, he becomes more suspicious for he was the son of a doctor and former politician of impeccable integrity, a rarity in Venetian politics. The doctor had authored a critical report about military procurement practices and shortly thereafter, his wife had been "accidentally" shot in the leg in an area where there was hunting taking place. Brunetti learns that there was also an "accident" involving the doctor's mother who was hit by a car. The driver fled the scene and she was not too seriously injured. But now, the family faces the tragedy of a son's death.

As Brunetti attempts to investigate the death, he is met by a wall of silence from the family and from the military school. None of the boys at the school will admit to having been friends with the victim or even knowing him very well and, of course, no one has any idea what happened to him. Moreover, the authorities at the school seem particularly reluctant to provide cooperation or information. And the family, who should be crying for justice, are suspiciously quiet. Is this some kind of conspiracy, perhaps related to a coverup of the dodgy military procurement practices the doctor had documented? Will Brunetti ever be able to find a way to break the code of silence and bring justice to the victim?

Spoiler alert - the answer to that last question is a resounding "No!"

Leon has a very low opinion of the Italian military and the government and she gives free rein to her detestation of those institutions here. Justice seems a concept that is foreign to both entities. I can understand her feelings in the matter, but her expression of those opinions here comes at the expense of plot development and at the expense of those loving descriptions of homely meals in the Brunetti dining room. As a result, the book just left me depressed and unsatisfied.