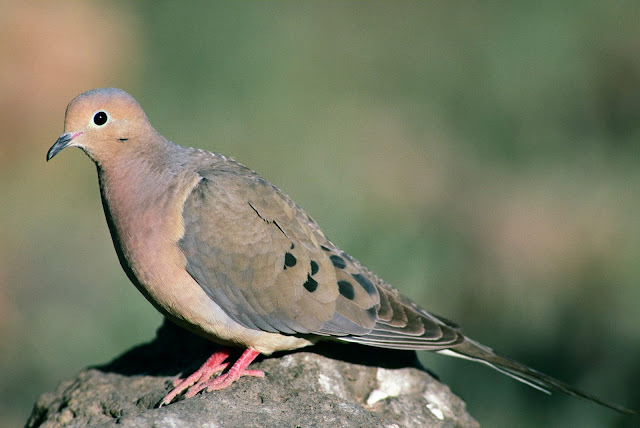 The lovely Mourning Dove is one of my very favorite birds and has been since I was a child. They are beautiful and interesting to watch, but perhaps most of all, I love their song. It's one of the first bird voices that I learned to recognize and it never fails to make me smile. I don't find the sound mournful at all.

I'll bet you didn't know that June 21 - 28 was Cephalopod Week! Yes, those octopuses, squids, and all their cephalopod cousins have a designated week in their honor. And why not? They are remarkable and intelligent creatures that have evolved a highly complex nervous system that gives their arms a mind of their own. Their unique abilities and behavior make them star attractions at many aquariums.

Four North Atlantic right whales have been found dead in the Gulf of St. Lawrence in Canada in the last three weeks. That represents about one percent of the total population of the endangered whales. In fact, it is even worse than that because six of the whales have died in the last month. Before the recent deaths, the total population had been estimated at 411 animals.

Meanwhile, in the Arctic Ocean, things are beginning to look a lot more like the Atlantic. That shift threatens to upend the whole food web that was built on frigid waters. That change creates a potential threat for birds like the Dovekie that have relied on that food web.

Coal-burning power plants are being shut down at a rapid pace across the United States. Electric power companies are thus faced with the choice of embracing natural gas or switching to renewable energy. Although many are going the renewable energy route, in some areas natural gas is becoming the preferred source. 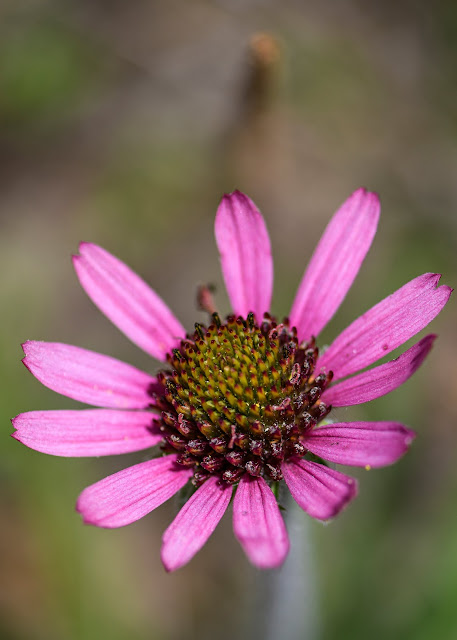 The Tennessee coneflower, a member of the genus Echinacea.

Here's another story about the resiliency of Nature, one that gives us some hope for the future of the planet: The Tennessee coneflower, a wildflower that had been thought to be extinct for decades, was rediscovered in 1968 and steps were taken to protect it. It was one of the first plants listed on the Endangered Species List. It is now considered to have recovered and was removed from the endangered list in 2011. Nature will recover if given half a chance.

Dozens of government-funded studies of the Department of Agriculture which carry warnings about the effects of climate change have been buried by the current administration. They refuse to publicize the studies done by the acclaimed in-house scientists in the department because they contradict this government's official denialism.

After the devastation of Hurricane Matthew on the Grand Bahama, there has been a rediscovery of a severely threatened bird, the Bahama Nuthatch. The only known population so far is two birds but it is hoped that others may be found and that the species can survive.

A plan to assist the recovery of the Monarch butterfly by raising them in captivity has run into a problem. The captive-raised butterflies lost their ability to navigate. Scientists studying the problem do not yet understand why. In other plans to help the iconic butterfly, planting more milkweed in the eastern part of the country is key. More urban gardens with milkweed could help to support the butterflies and give an increased chance for survival.

Do we need another reason to save elephants in the wild? Frogs love them! At least they love their footprints. It seems that some small frogs deposit their eggs in water-filled footprints left behind by the great animals and their young develop there.

Surveys conducted before and after Hurricanes Irma and Maria struck Puerto Rico found significant changes in the bird population. The most noticeable change was the disappearance of birds that relied on fruit in their diet. This may be a short-term effect and the birds could return as the forests recover.

It's good to know that some countries are still attempting to make efforts to reduce some of the harm done to the planet by humans. Members of the Association of Southeast Asian Nations have committed to addressing the problem of plastics in the oceans. This group includes some of the biggest producers of plastic waste in the oceans, accounting for half of the 8 million tons that wind up there every year.

The Great Indian Bustard is another seriously endangered bird with a remaining population of only about 160. A captive breeding program aimed at helping the bird is getting underway and eggs are being collected for the first hatch.

A plan to build a copper mine in a pristine wilderness area in Minnesota was stopped by the Obama Administration, so, of course, it has now been given the go-ahead by the current administration. I'm sure it is only coincidental that there is a business connection between members of the president's family and the billionaire behind the mining operation.

Fifty years ago, the polluted Cuyahoga River in Cleveland caught fire. It was not the first time, but in 1969, the nation's values had changed and there was more awareness of environmental problems. The fire became a catalyst to help move Congress to act. The Clean Water Act was passed and the Environmental Protection Agency came into being. Both have done much over the last fifty years to clean up and protect the environment; both are now under attack by those who see no profit in clean air and water or the continued existence of threatened animals and plants. If you do see value in those things, please do whatever you can to safeguard our gains and make sure they continue.