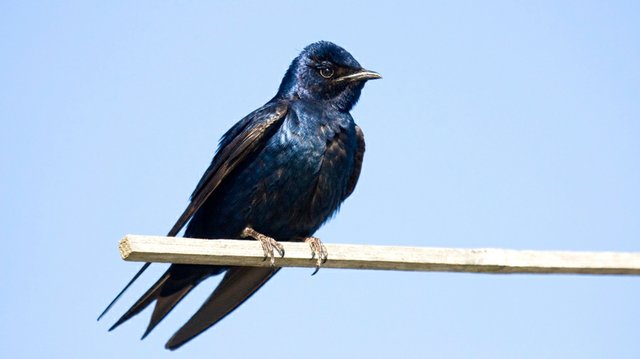 Purple Martins are among my favorite summer visitors and they are very much in evidence in my neighborhood this summer. Every time I'm outside I see many of them in the skies over my yard. One or more of my neighbors have nesting boxes for them. These birds in the eastern United States depend entirely on the nest boxes that are erected by humans. Several years ago, we had a martin "mansion" in our backyard but, after it was taken over by House Sparrows and European Starlings, we finally admitted defeat and took it down. There are fewer of these pests around our area now. Maybe it would be a good time to put up another one. Meantime, I'll enjoy my neighbors' birds.

The aphorism that it is an ill wind that blows no good is proven true once again, this time by Hurricane Sandy. The big storm which hit the east coast in 2012 caused cataclysmic damage to many areas, but, for one tiny endangered bird, the Piping Plover, it proved beneficial. The sands deposited by the storm on Fire Island created valuable new habitat for the birds and since the storm the population there has increased by 93 percent.

The deaths of gray whales along the West Coast this year have gotten attention, but there is a similar die-off among dolphins that is occurring along the Gulf Coast. At least 279 of the animals, triple the normal rate, have been stranded along the southern coast this year and 98 percent of them have died. It is suspected that this may be related to the lingering effects of the Deepwater Horizon oil spill into the Gulf waters, combined with lowered salinity due to fresh water flowing into the Gulf from flooding rivers.

In a more positive story from the Gulf Coast, endangered loggerhead sea turtles are having a comeback year off the coast of Georgia and it looks like 2019 may be a record-breaking year in terms of the number of females that nest there. 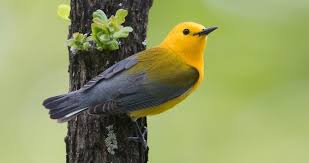 For my money, the Prothonotary Warbler is one of the loveliest of all our warblers. (I may be prejudiced since it is also one of the first warblers that I learned to recognize.) A study has shown that almost the entire population of the birds winter in an area of Colombia that is being rapidly deforested. This would put the birds in a precarious position and conservationists are scrambling to try to ensure that the forests that the birds need are saved.

Residents in southern Arizona are taking a different approach to try to save jaguars. They are protecting the jaguar habitat and creating jobs in the hope that a for-profit restoration economy can be more profitable to the area than an extraction economy.

Seabirds are some of the most majestic and beautiful of birds. They are also some of the most endangered. In some areas, though, progress is being made in protecting them, offering some hope for their future.

The blog "awkward botany" gives us the interesting tale of "The Flight of the Dandelion."

Since the federal government has abdicated its responsibility to protect the environment, several states are stepping up to the plate and increasing their efforts to hold the line. Chief among them in California which has a new bill in the legislature that could drastically reduce plastic waste and boost domestic recycling.

The Palila is a critically endangered species of Hawaiian honeycreeper. Recently six of the birds were released on Mauna Kea as part of a years-long effort to save the species. Hopes are high for the survival of these transplanted birds.

Images from spy satellites show that the Himalayan glaciers have doubled their rate of melting since 2000. The loss of the glaciers could create a devastating future for the region and the one billion people who depend on them for water.

This past winter was the worst on record for U.S. honeybee keepers. They lost 40% of their colonies despite efforts to stem the losses.

A devastating forest fire in Nicaragua has destroyed a vitally important nesting and roosting site of the Yellow-naped Parrot, pushing one of the most endangered parrots in South America closer to the brink of extinction.

The annual mating ritual of tens of thousands of red-sided garter snakes in Manitoba is a tourist event! It draws thousands of visitors to view the snakes as they writhe in pits in their efforts to engender a new generation.

Forests play an important role in cooling the Earth and when deforestation takes place, things heat up and the heat bleeds into surrounding areas increasing threats to vulnerable species.

Remember Pale Male, the famous Red-tailed Hawk that, with his mate, nested on a New York City highrise? The pair got a lot of publicity back in the '90s. New Yorkers loved them and insisted that their nest be left alone. Through the years, they raised several chicks, but now the debate is whether Pale Male is still alive. Some birders insist that he is while others say it is highly unlikely that a wild bird in the city could have survived so long. He would be around 30 by now, but Red-tailed Hawks have been known to live that long. Does he still live? He surely lives in the hearts of New York birders and he and his mate(s) live through all those chicks they produced over the years.