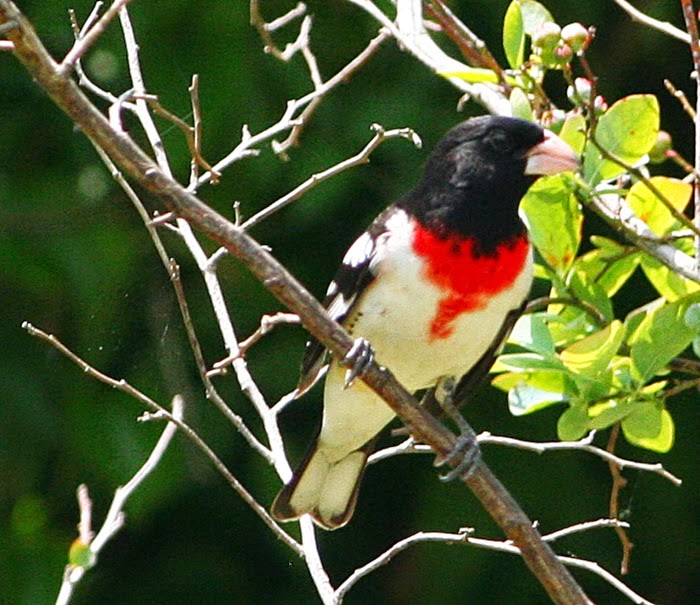 Last week I wondered whether the Rose-breasted Grosbeaks would make an appearance in my yard this spring. This week I have my answer and it is affirmative! I've only seen one so far but I hear their clear robin-like songs emanating from trees around the yard, so I'm hoping to see more and perhaps get some good pictures.

The latest Audubon magazine has a feature story on the Galveston Bay oil spill one month after the fact. The bottom line is that the long-term effects of the spill are still to be determined.

Scientists tracking the onset of spring and the bloom of flowers have found that the blooms are coming on average about three weeks earlier than what was documented by Henry David Thoreau in his observations on Walden Pond in the 1850s.

It began as a misguided effort to honor Shakespeare. In the 1890s, it was thought that it would be a wonderful idea to introduce to North America all the birds that had been mentioned prominently in Shakespeare's writings. And that is how, on one cold winter's day, sixty European Starlings came to be released in Central Park in the hope that they would breed. Unfortunately, they did.

The Blue-footed Booby, an iconic bird of the Galapagos Islands, has almost entirely stopped breeding there. The population of the birds has dropped by fifty percent over the last twenty years. Scientists are at a loss to explain what is happening although some believe it is related to a drop in the sardine population in the area.

A cave insect has been found in Brazil that has performed a sex-role reversal in its strategy for survival. The females have penises and the males have vaginas. Another remarkable feature of the insect's life is that copulation can last up to seventy hours!

The Ivanah Solar Electric Generating System in San Bernardino County, California continues to be a deadly place for birds. Surveys in March found 55 dead or injured birds, some of which showed clear evidence of singed feathers as an apparent result of "solar flux." This happened with the facility only operating at 55 percent capacity, which leads one to wonder what kind of carnage might result if it were running at 100 percent.

Scientists have tracked two male Ospreys from the region of the Anacostia River near Washington, D.C. to their winter home in South America and, now, back again to Anacostia. Both birds arrived safely within 48 hours of each other.

A recent report in the journal Nature states that years of drier conditions in the Congo River basin of central Africa has had an effect on the rain forest there. The forest is being reduced in size.

The grizzly bear population in Montana has suffered a reversal and a conservation group has sued the U.S. Fish and Wildlife Service, asking a judge to force the agency to downgrade the grizzly's status from "threatened" to "endangered."

Plans are afoot to build another wind farm in an area that is part of the endangered California Condor's expanding range. Proponents insist that the wind turbines would pose no threat to the endangered bird.

Other than that deranged freeloading rancher in Nevada, this is definitely the most disgusting story I've seen all week. The Houbara Bustard is an internationally protected species of bird native to Asia. Hunting it is banned in Pakistan, but that didn't stop a Saudi prince and his companions from killing 2100 of the birds when they went on a shooting expedition in the country.  You see, laws just don't apply to freeloading ranchers and Saudi princes. They are special.

It's been a busy week of comings and goings around the backyard. Among the goings have been the last of the American Goldfinches. I haven't seen any since last weekend, so I assume the last ones have flown.

Among the permanent residents, the big news has been the Carolina Wren family that has been exploring the yard. It is the parents and at least two babies. There may be more babies - it's hard to get the whole energetic family to sit still and pose long enough to count.

In addition to the aforementioned Rose-breasted Grosbeak, there have been at least two more migrants visiting the yard this week. On Wednesday, when I saw the grosbeak, I was sitting on my patio in the late afternoon gazing toward the back fence and the wild hedge there when I caught a flash of bright yellow. I picked up my binoculars for a better look and there in my view was a beautiful Yellow-breasted Chat. Lovely bird and one of my favorite spring visitors.

Late Friday afternoon, I was sitting on the bench by my goldfish pond when I heard a "chep" coming from the nearby redbud. I looked up to see a tiny Common Yellowthroat dressed in his shiny black mask.

I wonder what will turn up tomorrow.