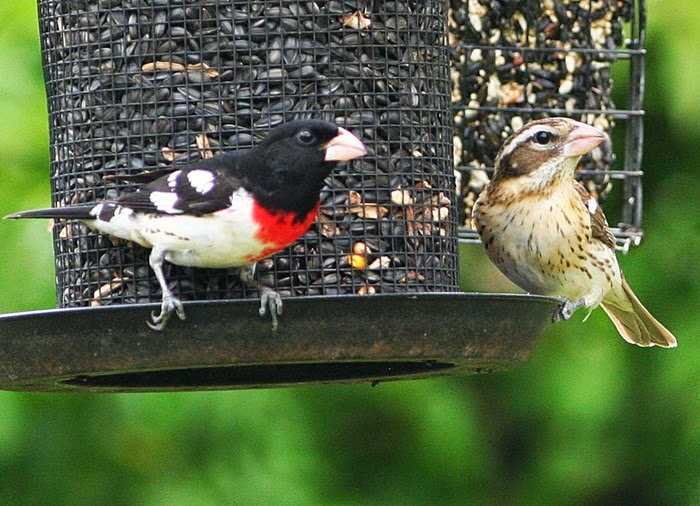 Rose-breasted Grosbeak visitors like this pair were common in my backyard last spring. They have reached and passed the Gulf Coast in their spring migration. Will any of them show up here this year? It always seems to be boom or bust - I have a lot of them or I have none. My birdfeeders are stocked and ready and I'm hoping for "boom" again this year.

One of the big stories in science this week was the occurrence of the so-called "Blood Moon" eclipse which generated the usual prophecies of the Apocalypse from the usual suspects. But it turns out such lunar eclipses are really not that rare. They've happened many times in history without triggering an Apocalypse.

I've reported here before about brainy New Caledonian Crows learning how to use water displacement to obtain food. Now here's a video from The New York Times science desk showing one of the crows in action.

Scotland's most famous Osprey, Lady, has returned to her nesting area for the 24th straight year and has laid her 69th recorded egg. The bird has raised 50 chicks during those previous 23 years.

Four years after the explosion of Deepwater Horizon in the Gulf of Mexico, the cleanup is finally winding down, but the environmental damage continues and its far-reaching effects are yet to have their final reckoning. One of the latest effects documented is a dramatic dwindling of insect populations in the Louisiana marshes. Since these critters are near the bottom of the food chain, that does not bode well for those that are higher up on the chain and that depend on them.

New research confirms that forests on nutrient-rich soil are better able to absorb carbon from the atmosphere than forests on poorer soil.

The Nature Conservancy is using data garnered from eBird reports to identify spots where shorebirds stop on their migration through the California valley. They are then paying farmers in those areas to make their land more welcoming for the birds.

In another big science story this week, it was reported that NASA's Kepler planet-finding mission has found a planet which appears to be a twin, or a cousin, of Earth, in that it seems to have the right conditions to foster life. The planet was given the name Kepler 186f. As far as I know, no one has yet suggested that this is a sign of the Apocalypse.

The La Brea tar pits of California are famous for the megafauna which they have yielded up, but some of the minifauna, which has received very little attention, has proved especially interesting as well. For example, bees, which it seems are connecting California's past to its present.

Some overwintering Snowy Owls are lingering on Massachusetts beaches and that is bringing them into conflict with returning Ospreys who consider those beaches their own.

More bad news for bats: The bat-killing white-nose fungus has now been identified in at least 25 states and bats continue to die by the thousands.

Colombia is suffering through a devastating drought which is raising fears of increasingly harsh summers in the region.

Hundreds of environmental activists have been killed around the world in the past decade. South America seems to be the most dangerous region for such activists. 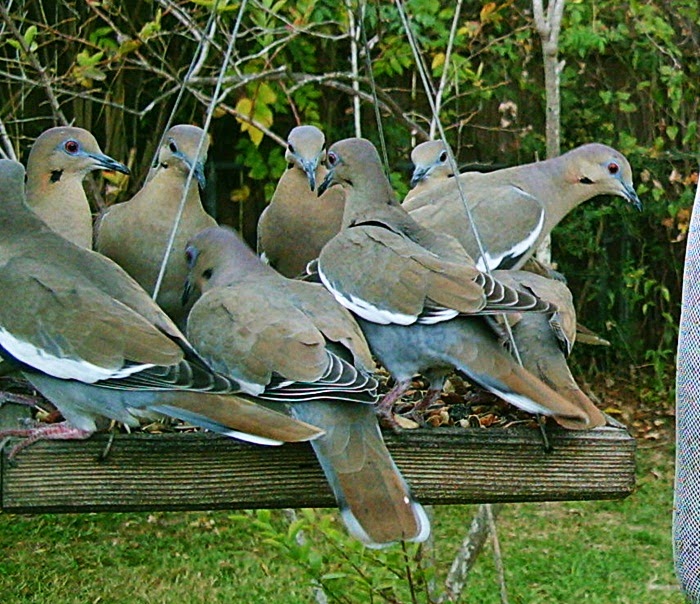 Scenes like this have become common around my yard again this week. This picture was actually taken during the winter of 2012, but my backyard feeders are again being mobbed by White-winged Doves. Curiously, I hardly saw any of these birds during the recent winter, but now here they are again en force.

Also curiously, the doves have been joined by a large number of Blue Jays. Now, I always have Blue Jays around but not ten or fifteen at a time like this week. And if you have any doubts, yes, ten or fifteen Blue Jays can raise quite a ruckus!
weekly roundup