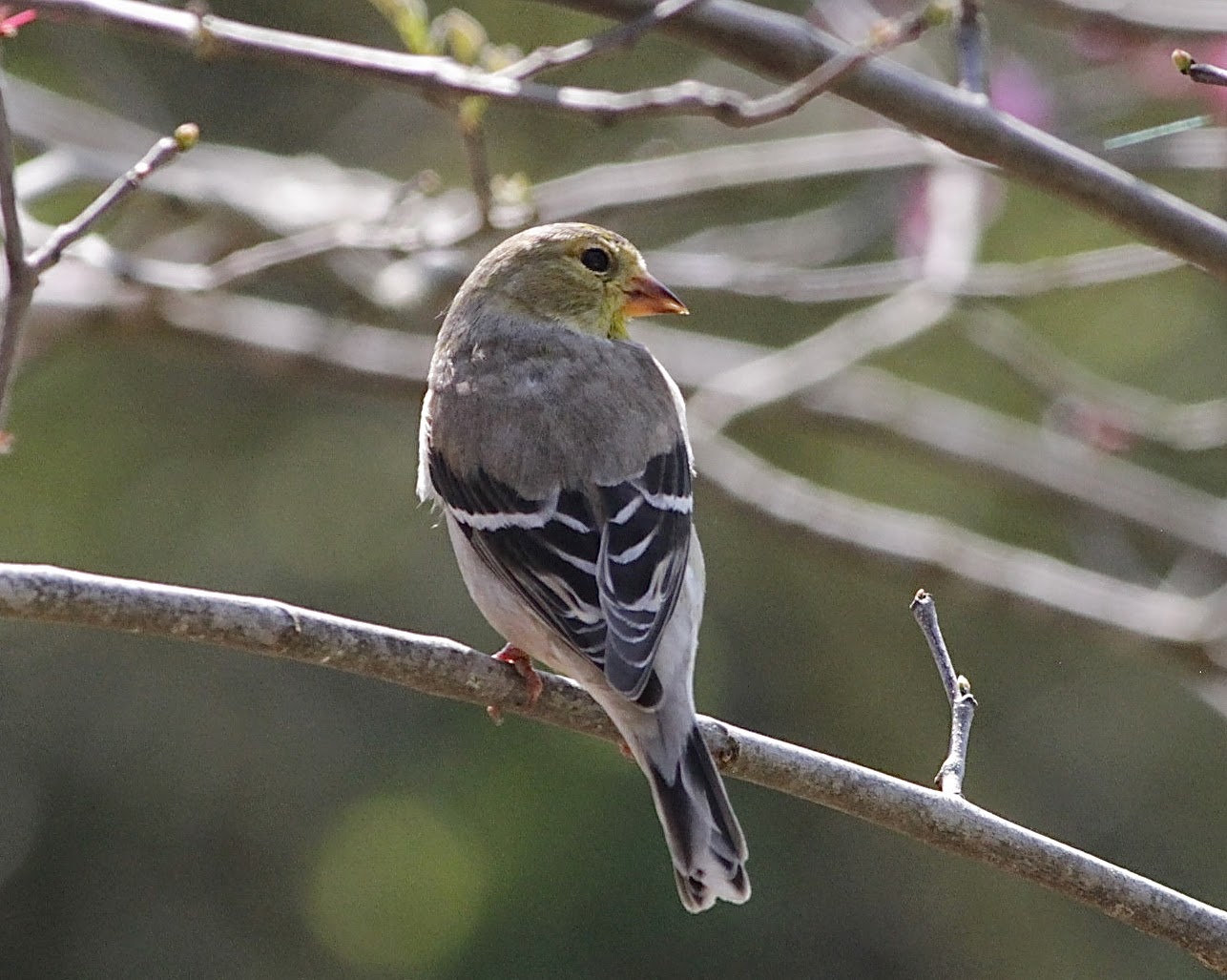 And still a few American Goldfinches are hanging around - or more likely passing through from a winter spent farther south. The Chipping Sparrows, Yellow-rumped Warblers, Ruby-crowned Kinglets, and Cedar Waxwings are still here to keep them company.

The full cost to the environment of the recent oil spill in Galveston Bay is still to be determined. As we know all too well from past spills, the effects are long term and not always immediately apparent. But for the present, Houston Audubon volunteers are dealing with oiled birds and trying to save what they can.

The search for the lost Malaysian airliner has been hampered by all the garbage floating in the ocean. The trash has proved to be a misleading distraction, causing searchers to expend time and effort on the wrong areas. It also points up just how polluted we have made the oceans and makes us wonder what are the greater effects that all that garbage is having on the ocean ecology.

Great Blue Herons are common birds but that takes nothing away from their majesty. For people who like to photograph birds - like me - they are certainly one of our easiest subjects since they are big and hard to miss and they do tend to stand still for long periods, striking a pose for the camera. The blog "Birding is Fun" posted an appreciation of this wonderful bird this week, accompanied by some particularly striking pictures.

Another striking bird is the White Stork and Britain is celebrating its return as a breeding bird. It seems that a pair have established a nest in Norfolk and may be the first to breed from a traditional nest in that country in over 600 years.

I've had a particularly busy and backbreaking week in my garden pulling the weeds that seem to be taking over the place, so I was especially interested to see this article about ten spring weeds that are edible and good for you. I could really get into pulverizing all those stinging nettles in my yard for the table. What a wonderful way to deal with my weed anger and frustration!

The Intergovernmental Panel on Climate Change (IPCC) issued another sober report and warning to humankind this week regarding the effects of climate change. Those effects are not something that will only happen far in the future. They are happening now and already causing drastic changes in life style in some parts of the planet. But still we refuse to listen or to do anything useful as a country to ameliorate the situation. Nature will exact its price, whether we choose to pay attention or not.

The Lesser Prairie Chicken, a resident of Texas, New Mexico, Colorado, Oklahoma, and Kansas, has recently been listed as "threatened" by the U.S. Fish and Wildlife Service.

The cold winter and spring in many parts of the country may lead to a burst of bloom as many flowers rush to open at the same time now that the weather is milder. In our area, it is expected to be a good season for wildflowers and for those who enjoy looking at them.

Plants have many unexpected skills for survival. One of them is an ability to change their odors to attract or repel insects.

The Audubon Society is attempting to raise funds to protect and save the endangered Tri-colored Blackbird. The birds are in imminent danger due to loss of habitat.

The Xerces Society and other associated groups that are concerned with the survival and health of pollinators are working to advise and educate local farmers and ranchers about bee-friendly plants. They encourage the cultivation of such plants and the salvaging of those that are planted by Nature.

Last week, I told you about the Eastern Bluebirds that were nesting in my yard with five eggs close to hatching. Unfortunately, they never hatched. Tragedy struck in the form of dastardly House Sparrows.

The sparrows harassed the bluebirds until they were able to drive them out of the nest long enough to destroy it. They pecked and broke the eggs, killing the chicks. Five beautiful blue eggs with chicks - all destroyed. All the bluebirds' time and effort - wasted.

The sparrows are a plague in my yard and this is not the first time they have caused environmental damage. If I knew of a way to get them all out of the yard without harming the other birds, I would definitely go for it. As it is, I plan to move the bluebird box to another area in the yard that is not so friendly to sparrows. I only hope that will be enough to protect the bluebirds in the future.
weekly roundup