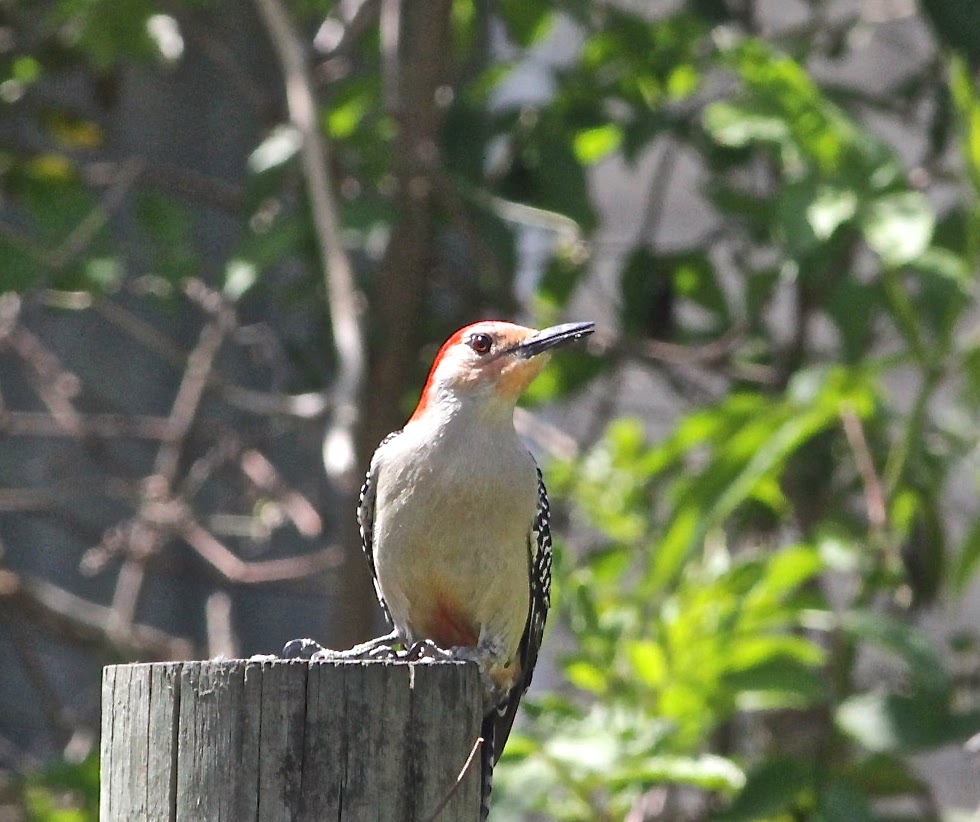 The Red-bellied Woodpecker shows you how he got his name.

Paleontologists have discovered another feathered dinosaur from the group known as Oviraptorosauria, but unlike most of the others of this type that have been found in Central and Eastern Asia, this one was discovered in North America, the first one of its kind to be found here.

Why did the chicken cross the Pacific Ocean? Because a human carried him in a boat, and that fact has given scientists another way of tracking human migration. They do it by tracking the evolution of chicken DNA on the islands.

The Kakapo is a critically endangered flightless parrot from New Zealand. Those trying to stave off its extinction had reason for rejoicing this week when the first baby Kakapo in three years was hatched.

Passenger Pigeons were once one of the most abundant birds on Earth, but a human misunderstanding of the ecology of the birds helped contribute to its extinction one hundred years ago.

It has been a rough winter for fish-eating ducks like Red-breasted Mergansers on the Great Lakes. Frozen lakes have made it difficult for the ducks to obtain enough food to survive.

We tend to think of the earthworm as being an unambiguously good and helpful species, but that is not true in all cases. In fact, it is an invasive species that can actually do harm to other parts of the ecosystem in some situations.

Ratites like Ostriches, Emus, and Kiwis are very different from your average backyard bird. For one thing, they are flightless, and they tend to be gigantic with long necks and ridiculously small wings in proportion to their bodies. They are likely the closest living relatives to the feathered dinosaurs on the bird family tree.

The long-term survival of the Magellanic Penguin on Chile's Magdalena Island is being threatened by the effects of global warming.

This was the week when the spring migration of birds really became apparent in my backyard. The American Goldfinches all but disappeared. I've only seen one pair this week. Pine Warblers are suddenly absent from my yard, too, and, in their place, some new faces are being seen.

On Monday, the first male Ruby-throated Hummingbird showed up. On Wednesday, I was doing some observations for Project FeederWatch when who should pop into view but a Black-and-white Warbler! I thought it was a bit early for them, but then I read my email and saw a message from Journey North, the website that tracks migrations, which informed me that the little warblers are being seen routinely in South Texas these days, so it turned out my sighting was not that unusual.

Later on Wednesday, I saw my first Blue-gray Gnatcatcher of the year. I think they've actually been around for a while, but that was the first one I had seen in my yard.

With the new birds in town added to my permanent residents and the winter visitors that remain, I had my best total this season for Project FeederWatch - 32 species. 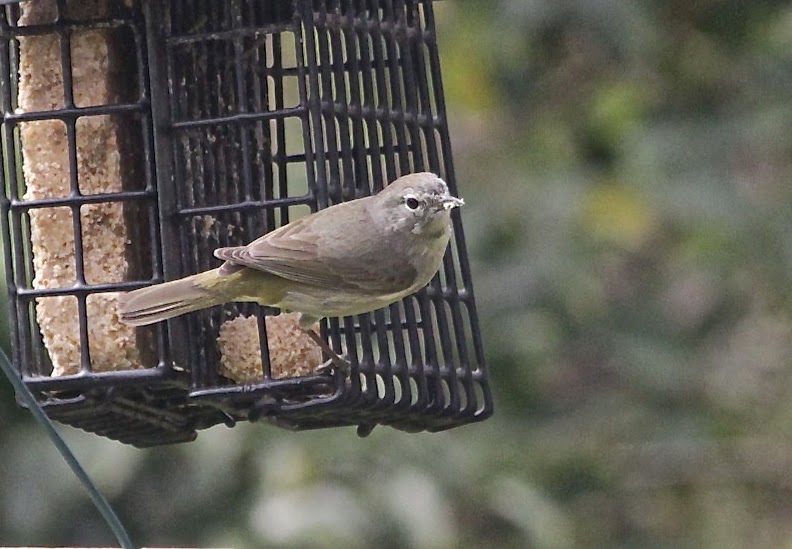 One of the winter residents still here is this little Orange-crowned Warbler who loves the suet cakes that I provide. He's been a reliable daily visitor all winter. 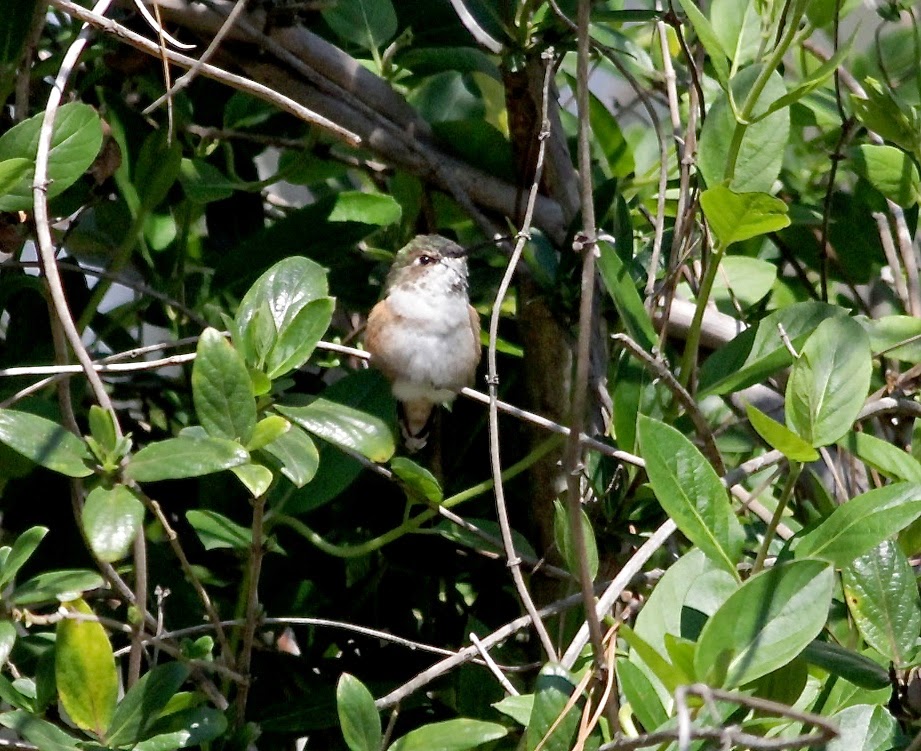 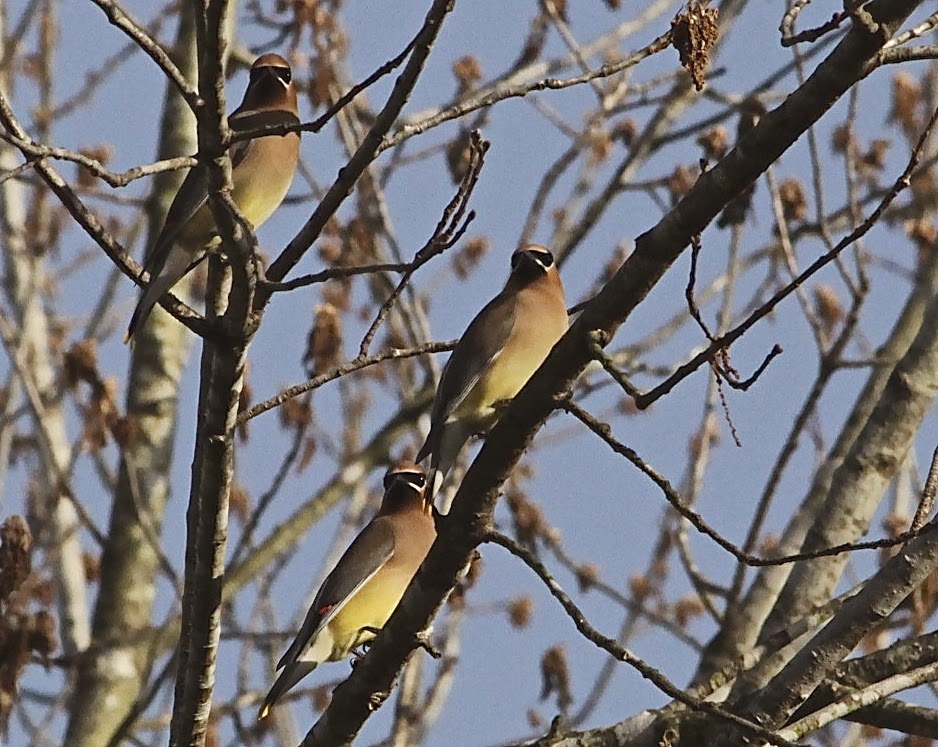 And, of course, the Cedar Waxwings are still around and probably will be for several weeks more.

Among the permanent residents, the main thing on their minds now is sex. 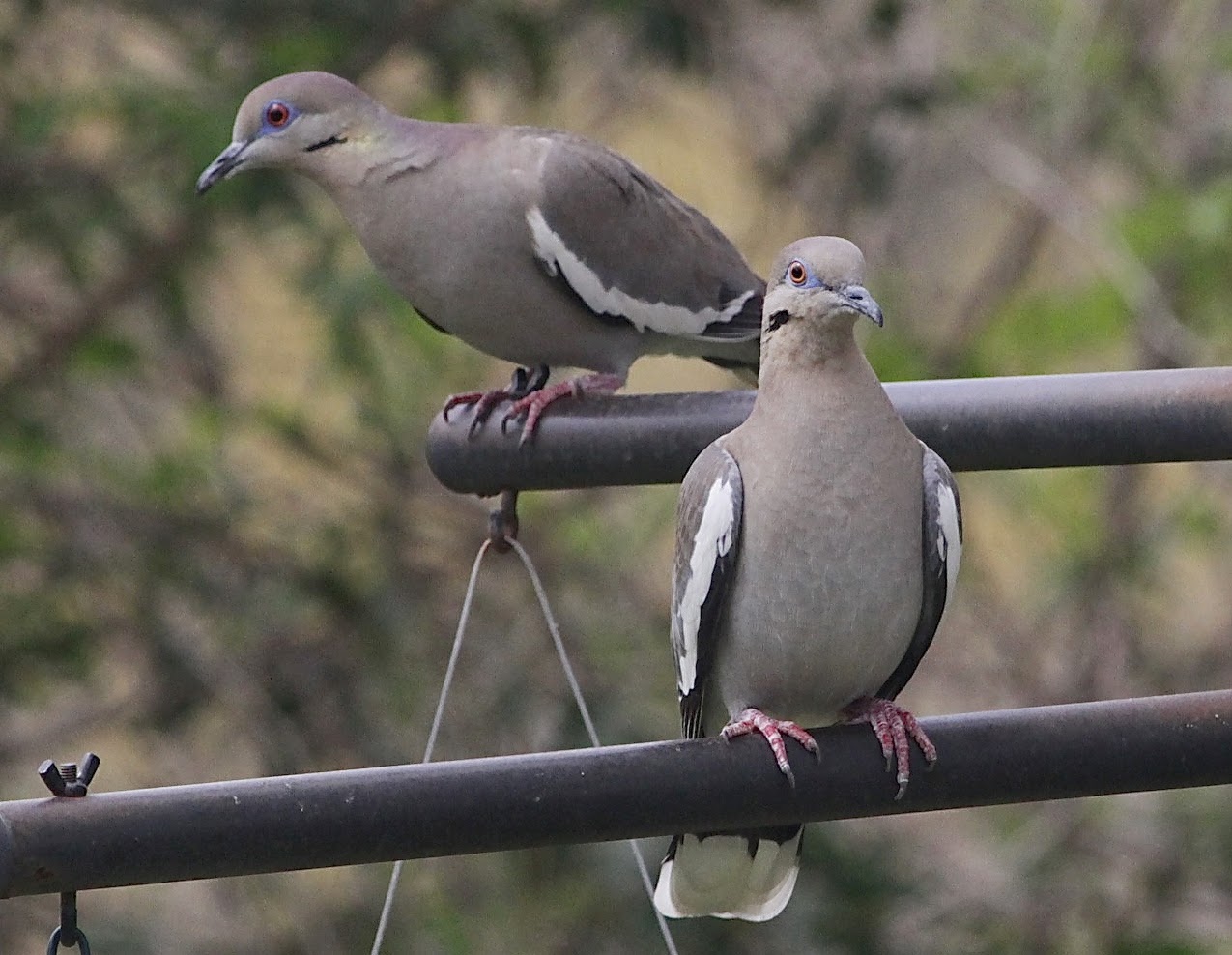 The White-winged Doves tend to show up in pairs instead of groups now. 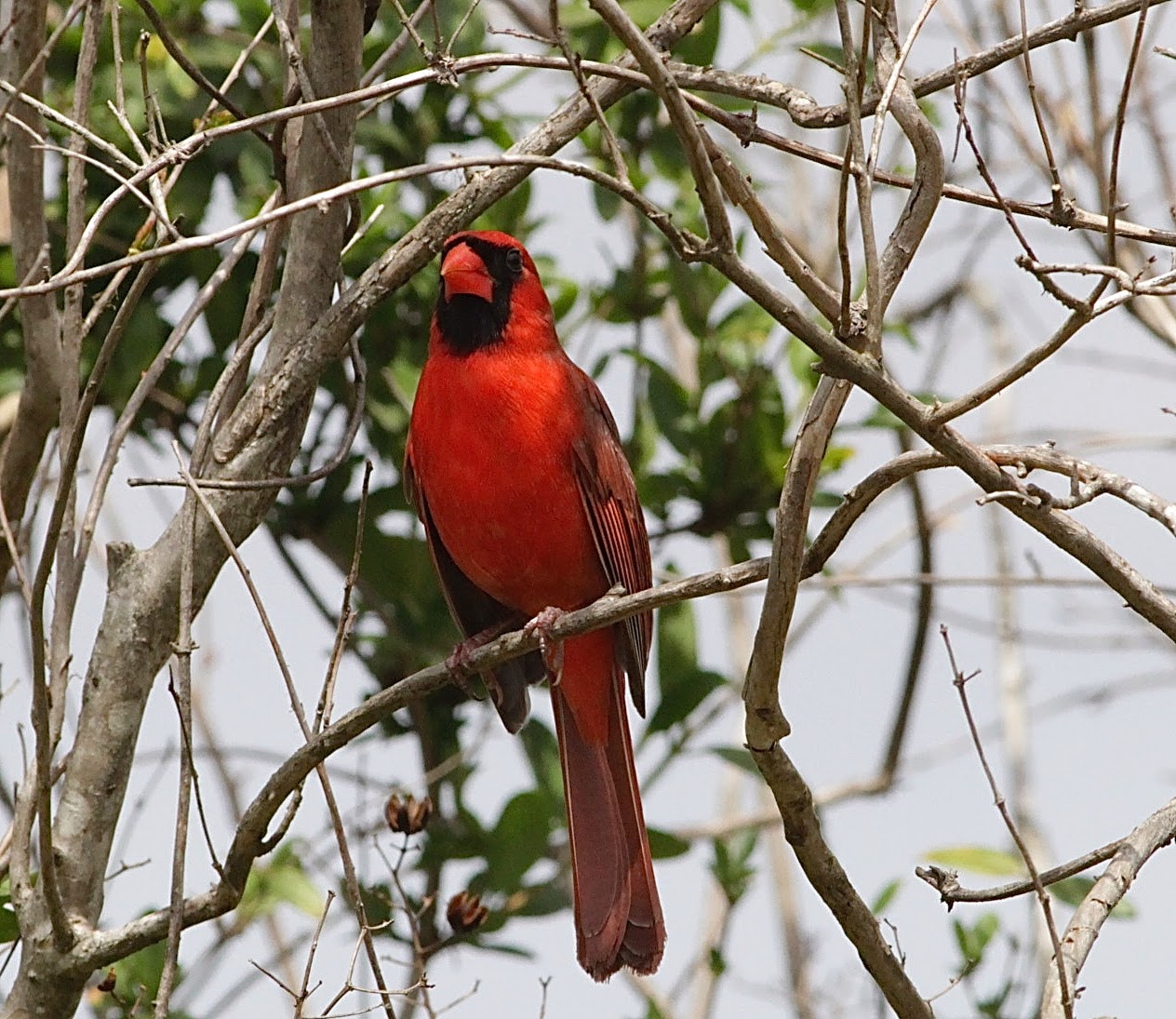 The Northern Cardinals, of which there are many in my yard, spend much of their day chasing each other around, trying to establish their territories. The males in their courting clothes are simply dazzling. 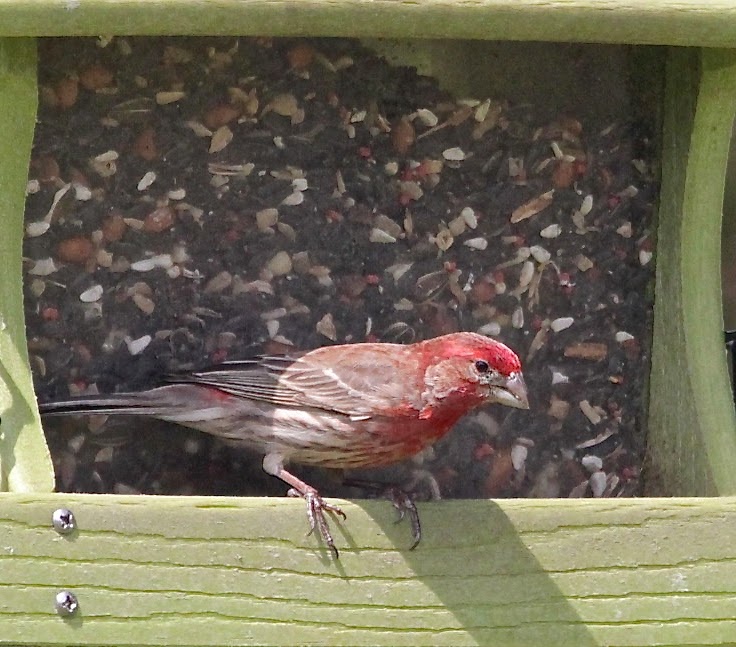 The House Finches, of course, show up in pairs or family groups throughout the year. This male, too, is sporting brighter colors these days. 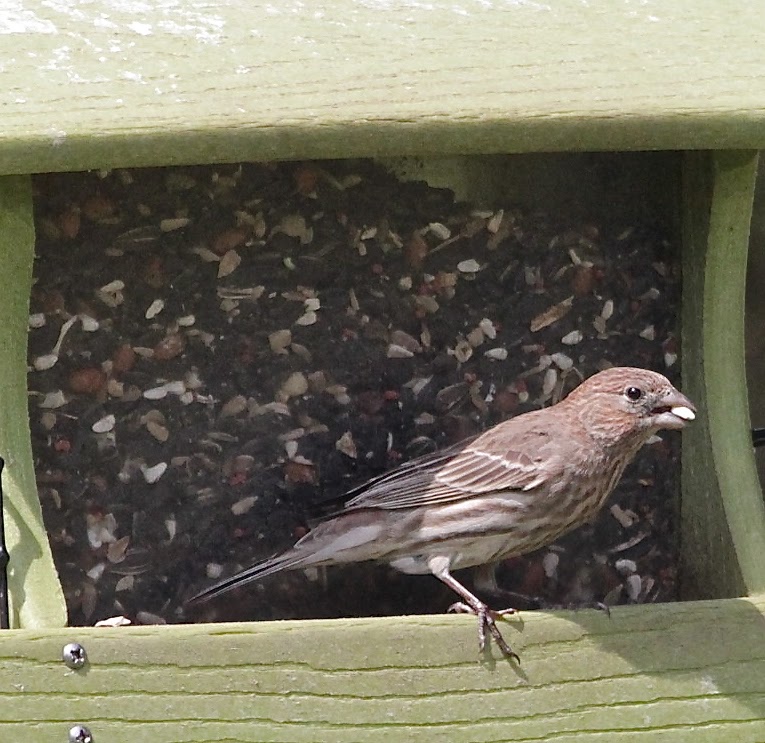 On his mate, you can see just bit of a rosy wash on the head. 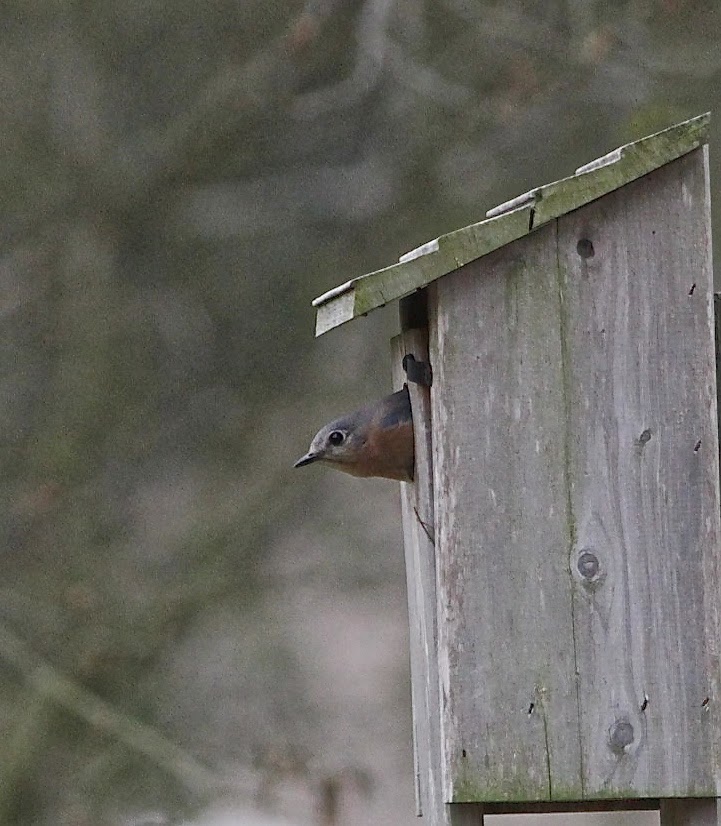 And in the bluebird box, things are off to a roaring start. There is a perfectly crafted pine straw nest which holds five beautiful blue eggs. Incubation has just started. Here, Mama Eastern Bluebird takes a break from sitting on the nest to poke her head out the door to see what's going on around her. In less than two weeks, if things proceed normally, we will have the next bluebird generation. Indeed, spring is here!