March 01, 2014
A roundup of the week's news of birds and the environment:
(Series continued from Backyard Birder.) 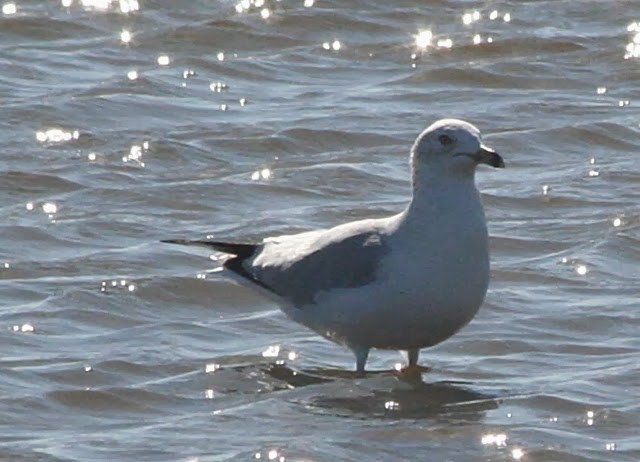 And speaking of California, that extremely dry state is finally getting some rain. The fear now is that it may be too much too soon for soil depleted of plants to hold it in place. It looks like there will be more rain in coming days which should begin to replenish lakes and reservoirs.

Plants and animals that evolve together can develop characteristics which attract or repel each other as may be required for their survival. A case in point is the flowers of Australia which share habitat with species of birds called Honeyeaters. These are nectar-feeding birds that serve as avian pollinators for the plants. The plants have evolved colors that are attractive to these birds that they depend upon for pollination.

The Labrador Duck is a famous pied duck that was painted by Audubon and was accorded species status in the 19th and early 20th century before it was believed to have gone extinct. But modern research seems to indicate that the bird hasn't gone extinct, that it, in fact, never existed as a species. It is now believed that the bird painted by Audubon and described by ornithologists of the period was instead a naturally occurring hybrid between the Common Eider and Steller's Eider.

The greatest part of our planet is made up of oceans and the greatest part of the population of the world lives on coasts or in close proximity to coasts adjacent to those oceans. We are doing untold damage to the oceans by dumping things in them, heating them up through global climate change, and changing the chemical composition of the water. We continue to befoul our oceans at our own peril. 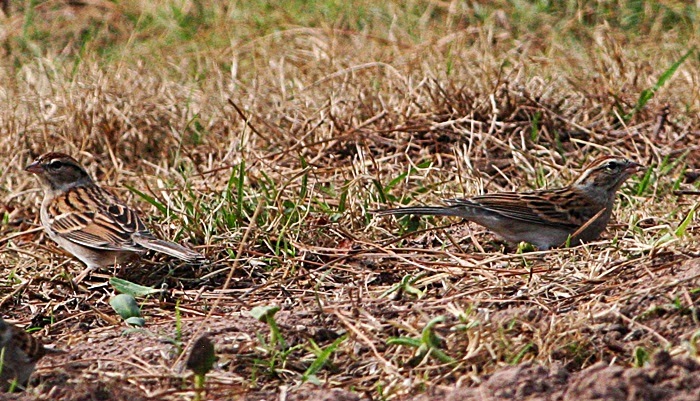 Chipping Sparrows are among my favorite winter visitors.

Researcher have learned that male Chipping Sparrows will sometimes help a neighbor rival repel other males that challenge his territorial boundaries - if that rival is weaker than he is. It is not altogether clear why they do this. Perhaps they just prefer having a weaker rival as a neighbor rather than the possibility of gaining a neighbor who is stronger. 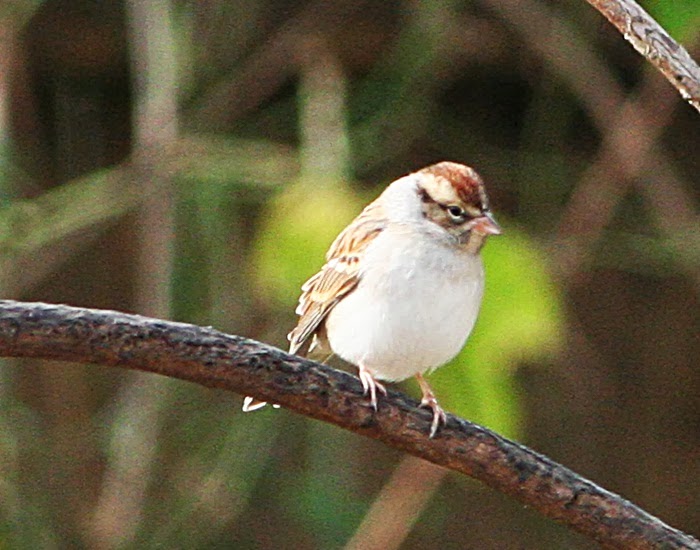 The chippie really is just about the cutest of all the sparrows, don't you think?

The sad tale of the extinction of so many native Hawaiian birds has been a recurring story in recent years. You would think that everyone would be on board with doing everything possible to save what is left. You would be wrong. There are people actively working to have the endangered Hawaiian Hawk removed from the protection of the Endangered Species Act.

Throughout human history, many high civilizations have been brought low by the effects of climate change. Scientists studying the rise and fall of the Indus Valley civilization of the Bronze Age believe that it was one of these.

Green roofs, i.e., roofs covered with soil or some other growing medium and vegetation, are becoming quite popular in many cities of the world. Many such roofs exist already in New York City and they provide a safe haven for birds and insects high above the busy streets. They are like little oases for Nature's critters.

Scientists believe that the tail shapes of different species of diving birds have evolved to facilitate their individual foraging styles.

Habitat loss can cause extreme stress to birds. Researchers have found that in the case of Kestrels, it can actually shorten their lives, making it necessary for them to start breeding earlier in order to maintain their population.

As geolocators used to track birds have gotten smaller and lighter, it has become possible to track smaller and smaller birds without adversely affecting their flight or movement.

There is concern in some quarters that activists who are concentrating their ire and their fire on Monsanto and its product Roundup in their fight to save the Monarch butterfly may be missing the point. The plight of the butterfly may be more complicated than they imagine and may be being affected by other companies and other products that equally need our attention. It is a difficult conundrum and no stone should be left unturned in the attempt to find a solution.

As I've reported previously many of our winter birds have moved on over the last week or ten days, although a couple that I'd thought had left - namely the Orange-crowned Warbler and the Yellow-bellied Sapsucker - are still here. I saw them both today.

But as some have abandoned my yard, others have moved in to take their place. The Cedar Waxwing flock has grown exponentially over the last week or so and now numbers well into the hundreds. I'm sure this is because birds that wintered farther south are now moving slowly north and have decided to camp with us for a while. 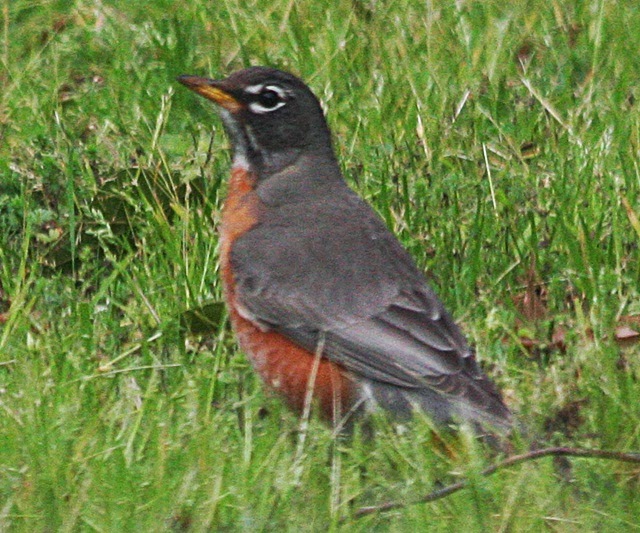 We've had a few robins all season long, but now, all of a sudden, they seem to be everywhere I look. And I hear their songs throughout the day, whereas previously they were only heard in the early morning and late afternoon.

They spend much of their time ranging over the yard looking for bugs and trying to sense earthworms in the soil. And after all that hunting, it's time for a bath! 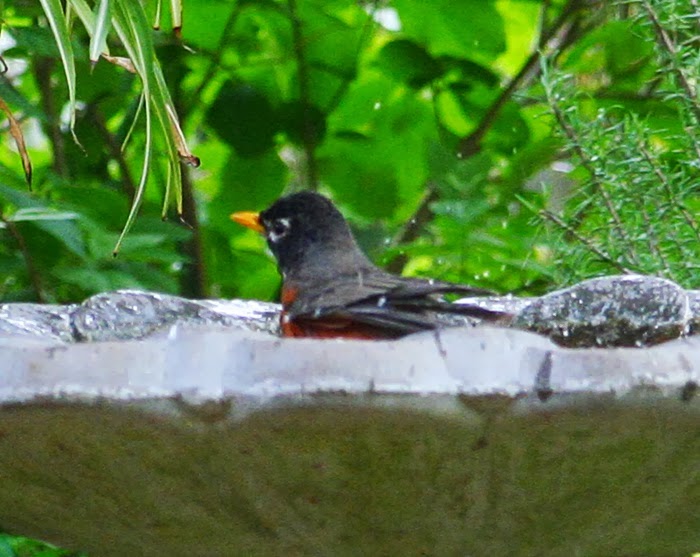 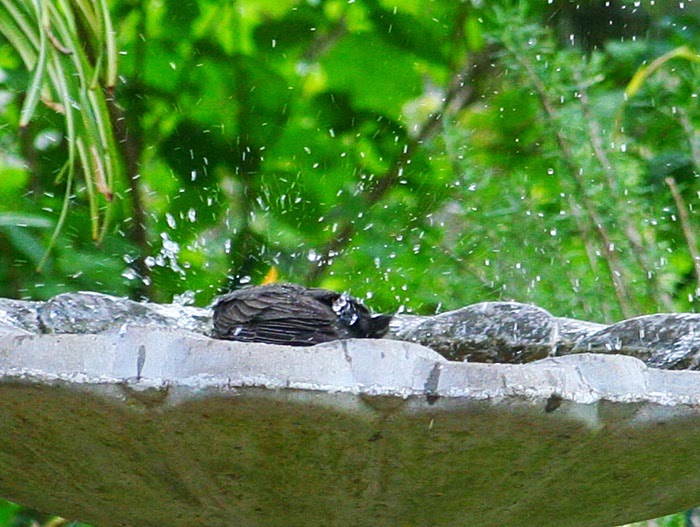 Few birds enjoy a good bath more than a robin.

While we are still seeing winter visitors around the yard, though in smaller numbers in some cases, at least one summer visitor has arrived - the Purple Martin. We no longer have a martin mansion in our yard but other people in the neighborhood do and so I get to enjoy their martins flying over my yard. The first ones turned up - or at least I first saw them - one day after I completed my count for the Great Backyard Bird Count. Pity they couldn't have shown themselves a bit earlier so I could have added them to my list.
weekly roundup