The Whooping Cranes of Aransas

March 14, 2014
On our recent late winter vacation, we traveled down the lower Texas Gulf Coast. The main purpose of our ramblings was to see birds, particularly the most majestic and famous birds of this part of the world, the Whooping Cranes.

The flock of Whoopers that winters along the Texas coast is the last completely wild flock of these rare and endangered birds. They were once fairly widespread on the northern prairies, but the species was brought to the brink of extinction in the 1940s. The population bottomed out at only fifteen birds.

Since then, strict protection has helped the bird begin to recover. The Aransas flock now numbers around 300 birds and there are ongoing efforts to establish other flocks, notably in Florida and Louisiana. These birds nest in central Canada at Wood Buffalo National Park. Beginning around the end of this month they will begin their 2,400 mile flight back to their summer home. By mid April, they will likely all be gone.

The birds' winter diet consists of crabs, clams, shrimp, insects, frogs, snails, snakes, small fish, acorns, roots, seeds, and berries. By far their favorite winter food is blue crabs. Normally, they find plenty to eat along the Texas coast, but a few years ago, during a terrible drought which depleted the usual supply of food, 23 of the birds died of starvation during their winter here. This brought home once again just how fragile this population is and how one weather event or epidemic might wipe out this wild population. It gave more impetus, if any was needed, to the efforts to establish other flocks.

It is an amazing thing to see these magnificent birds in the wild. Over the years, we have made several pilgrimages down the coast in late winter to have this experience. This year's trip was the most successful ever, in that we saw more birds than we ever had before. We took the four-hour boat tour of the bay on one day and on another day visited the bird viewing tower in Aransas National Wildlife Refuge. Our total for both days was 20 adult birds and six juveniles. 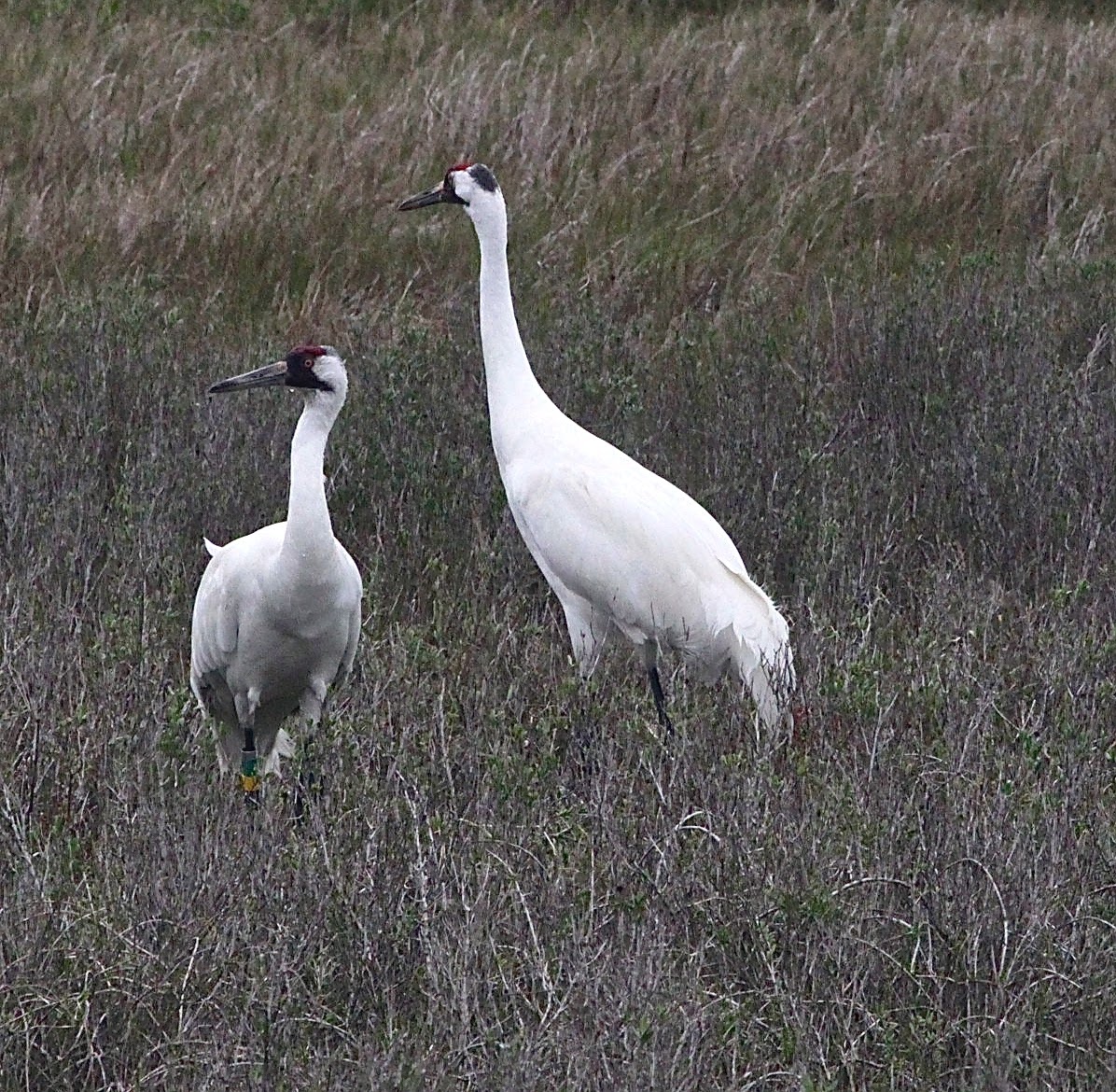 Whooping Cranes mate for life and mated pairs are inseparable. Wherever you see one of the cranes, you will see two - or at least there will be a second one nearby. This was the first pair that we saw from the deck of the Wharf Cat, a Whooping Crane tour boat out of Rockport. 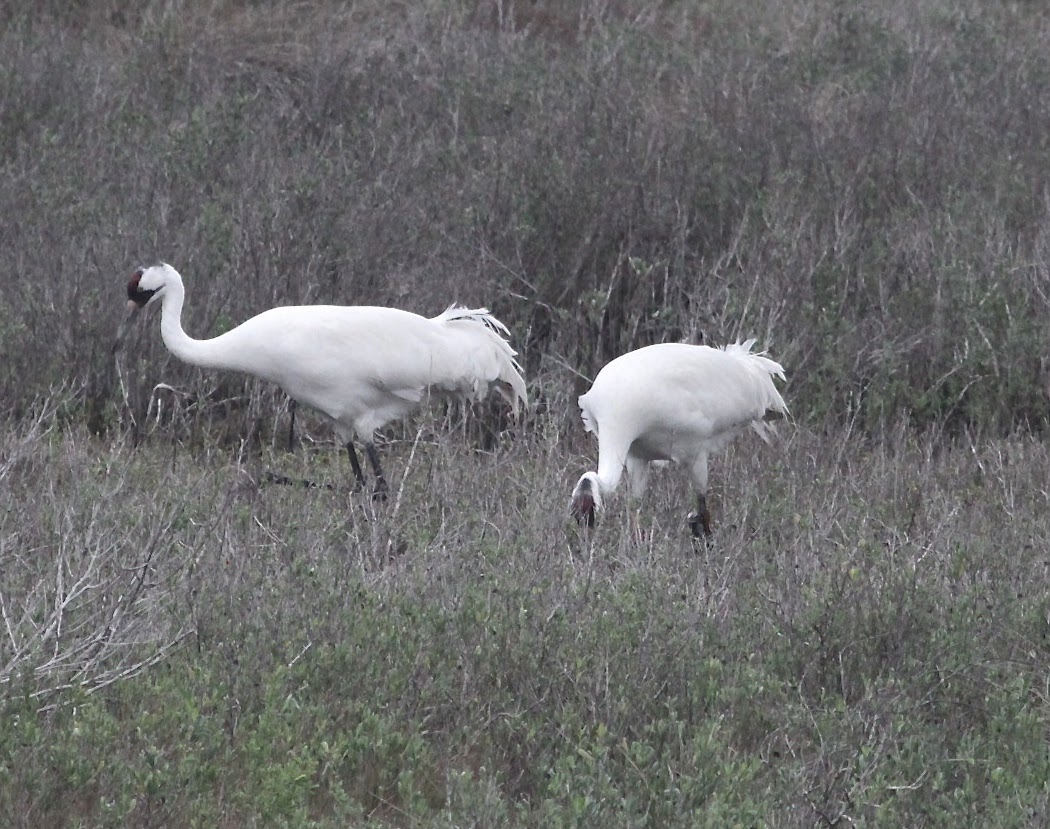 These two stayed close together as they fed among the marshes. 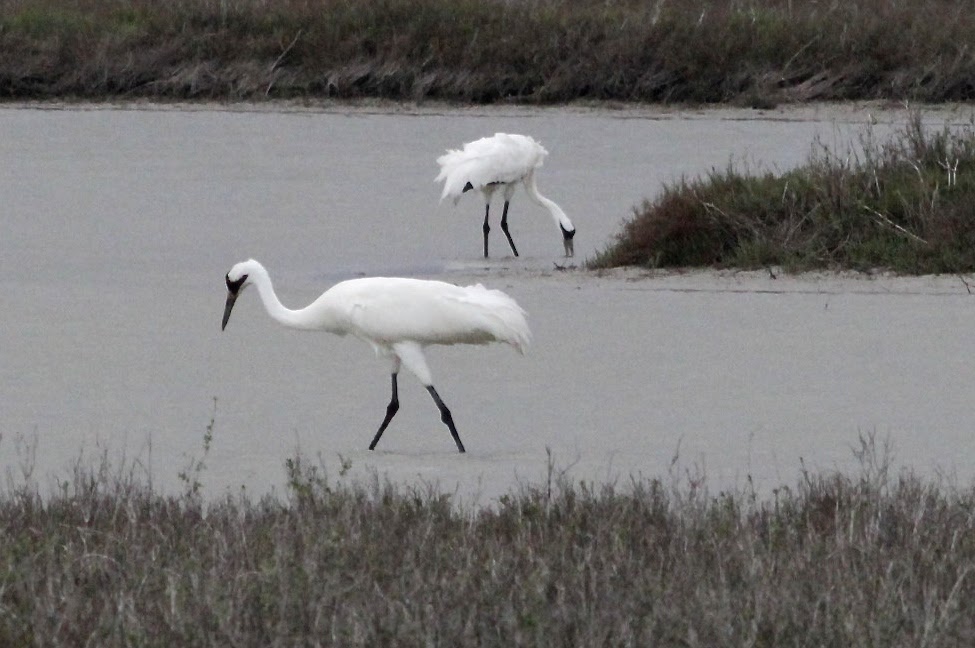 This pair seemed to be actively searching for their favorite food, those tasty blue crabs. 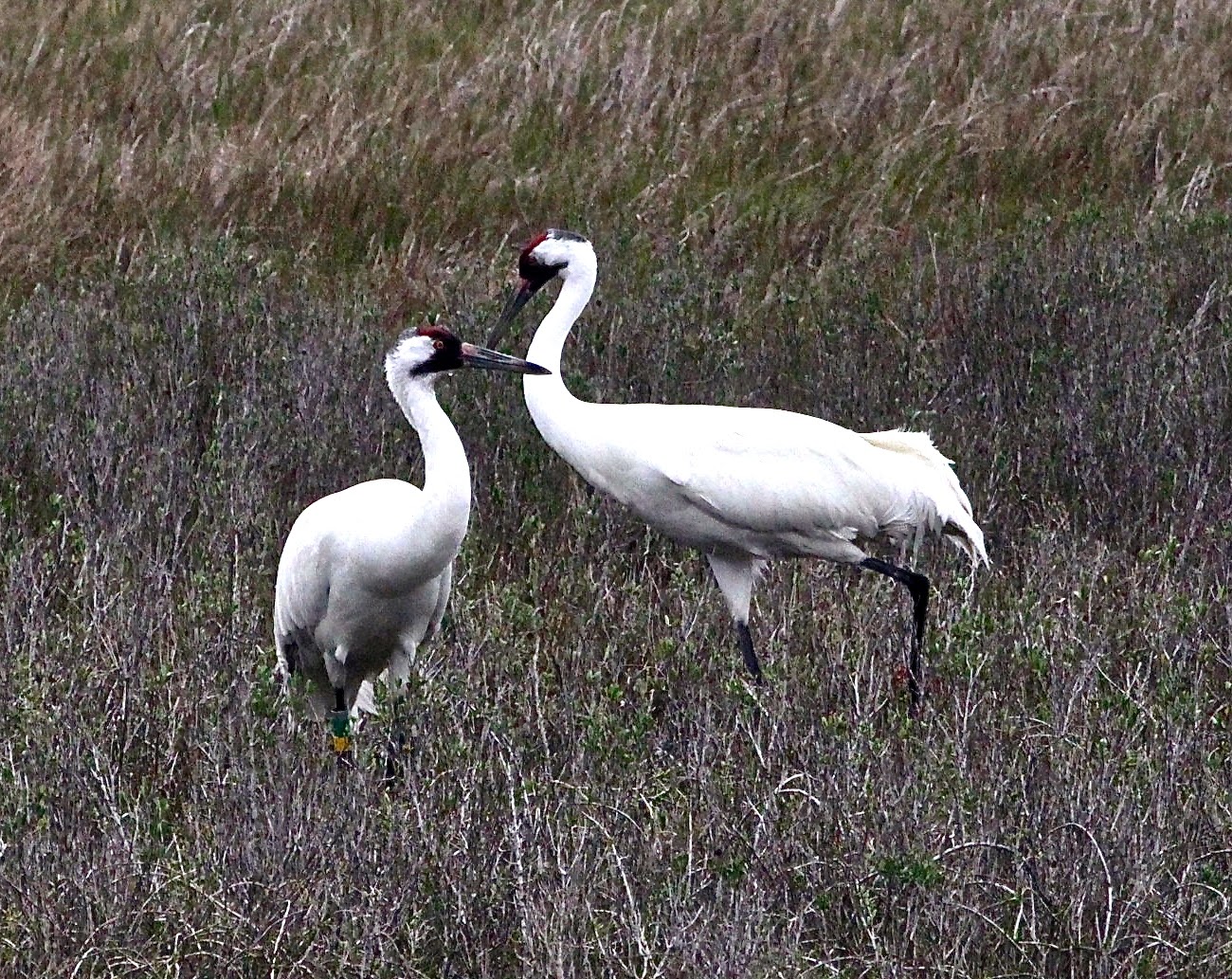 Some of the birds that we saw had bands and even GPS equipment on their legs. The bird on the left here has such a band. You can just see a bit of the yellow on the right leg. 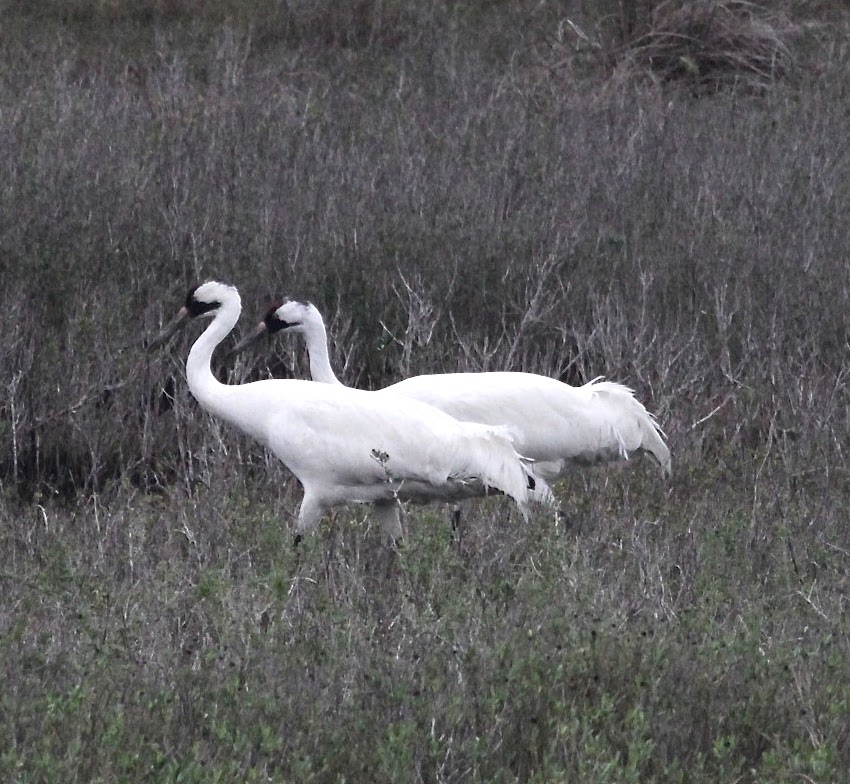 Male and female Whooping Cranes are the same size and look exactly alike, so there is no telling which is which in any of these pictures. 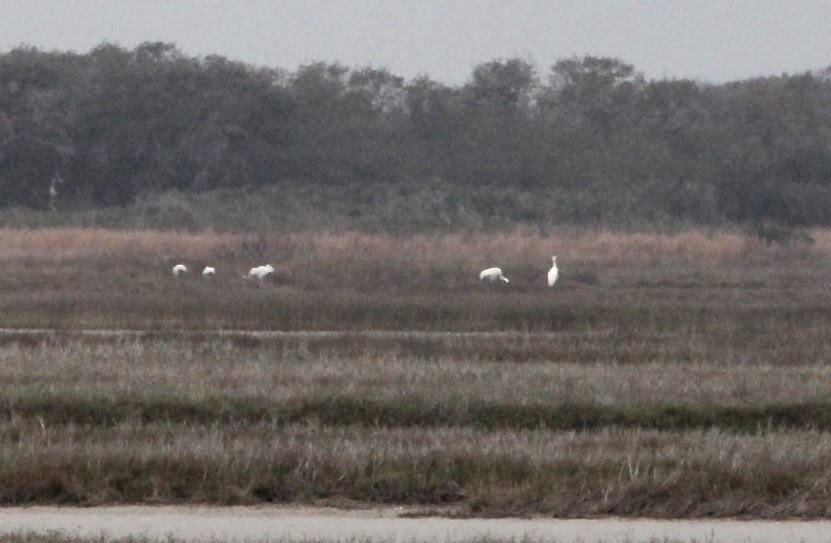 In some years, we have seen pairs that still have their last year's chick or chicks with them. Typically, cranes only raise one chick, but some experienced pairs will occasionally raise two. On our last trip to Aransas five years ago, we saw such a family group - parents with two mostly brown chicks. Whooping Cranes are long-lived and they take their time to reach sexual maturity. They generally are sexually mature at between four and seven years. The average is around five-and-a-half years. Until they become sexually mature and mate, the juvenile birds gather together in small groups like the one you see here. (These birds were far in the distance from our boat, so it was hard to get a good picture of them.) There are actually six birds in this group. The third from the left is in fact two birds standing close together.

Unlike most birds, the cranes live and migrate in family groups rather than in large flocks. A mated pair or a juvenile group will make the trips twice a year on their own.

In spite of the fact that these birds are protected by laws and the U.S. Fish and Wildlife Service makes every possible effort to ensure their safety, there is no way that they can be completely protected from human stupidity and cruelty, especially in a country where the gun culture seems to give people license to kill anything they choose to. Even to kill such beautiful and utterly harmless creatures as Whooping Cranes. In Jefferson Davis Parish in Louisiana a few days ago, a mated pair of the birds from a flock which conservationists are trying to establish in that state were shot and killed. The killer has not yet been found but a $20,000 reward has been offered as an incentive for anyone who may have information that will lead to his identification and arrest. Let us hope that he is found and is punished to the full extent of the law. But nothing will bring back those two precious birds.