Birds of the Gulf Coast

March 18, 2014
The Gulf Coast of Texas is among the birdiest places one can find on this continent. On any given day, there are around 200 different species there. At times during spring migration, the number is closer to 300.

During our trip along that coast last week, I didn't get anywhere near the 200 figure. The weather was rather miserable, gray and drizzly every day, and the conditions for birding were not optimal. Still, I did manage to see a goodly number of the feathered residents.

I've already shown you the most spectacular feathered creatures we saw - the Whooping Cranes of Aransas. Here are a few others that we encountered along the way. 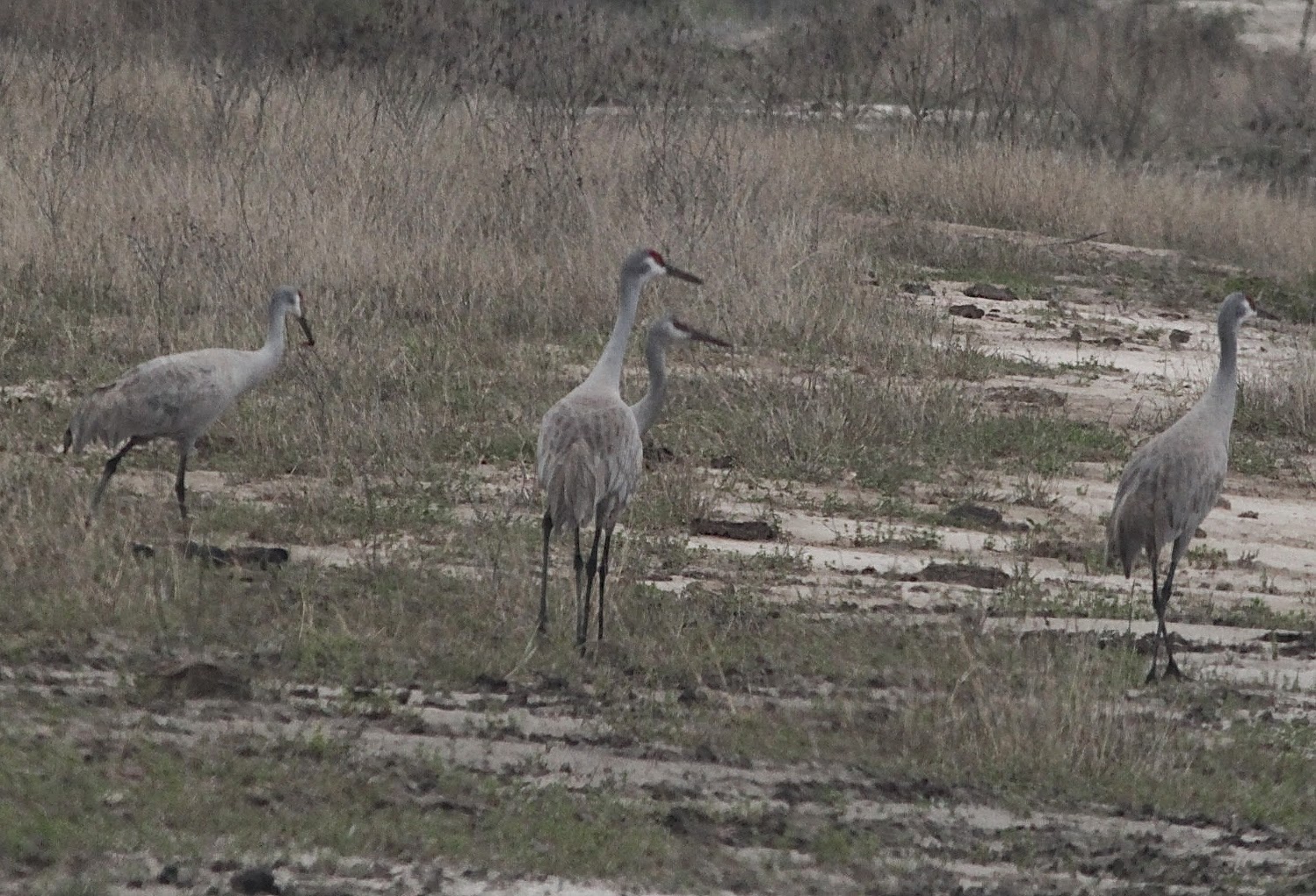 The Whooping Cranes were not even the only cranes that we saw on the trip. In a meadow near the entrance to Aransas National Wildlife Refuge, a small group of Sandhill Cranes were making a rest stop on their way north. 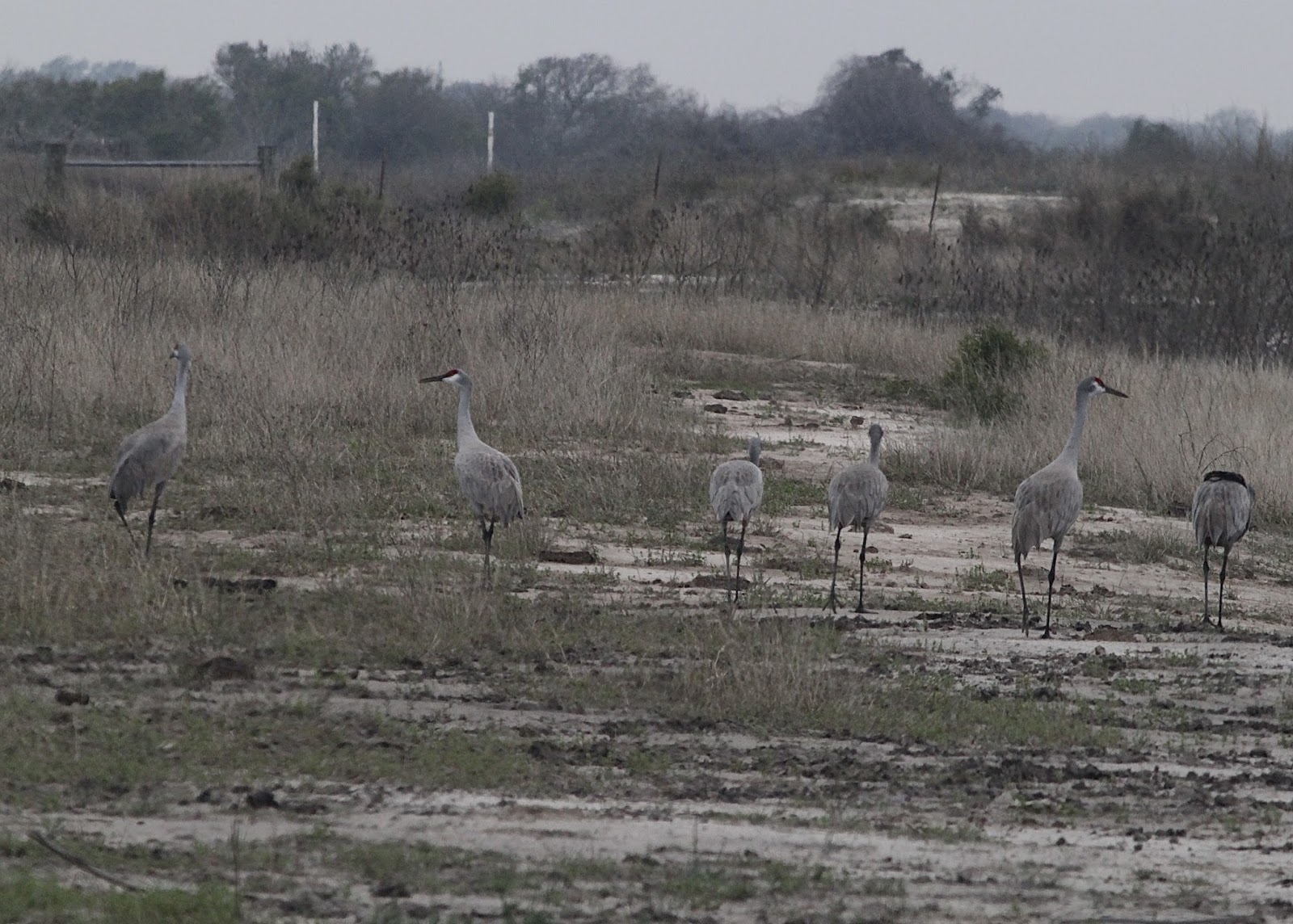 A total of six of the birds were looking for snacks in the marshy field. 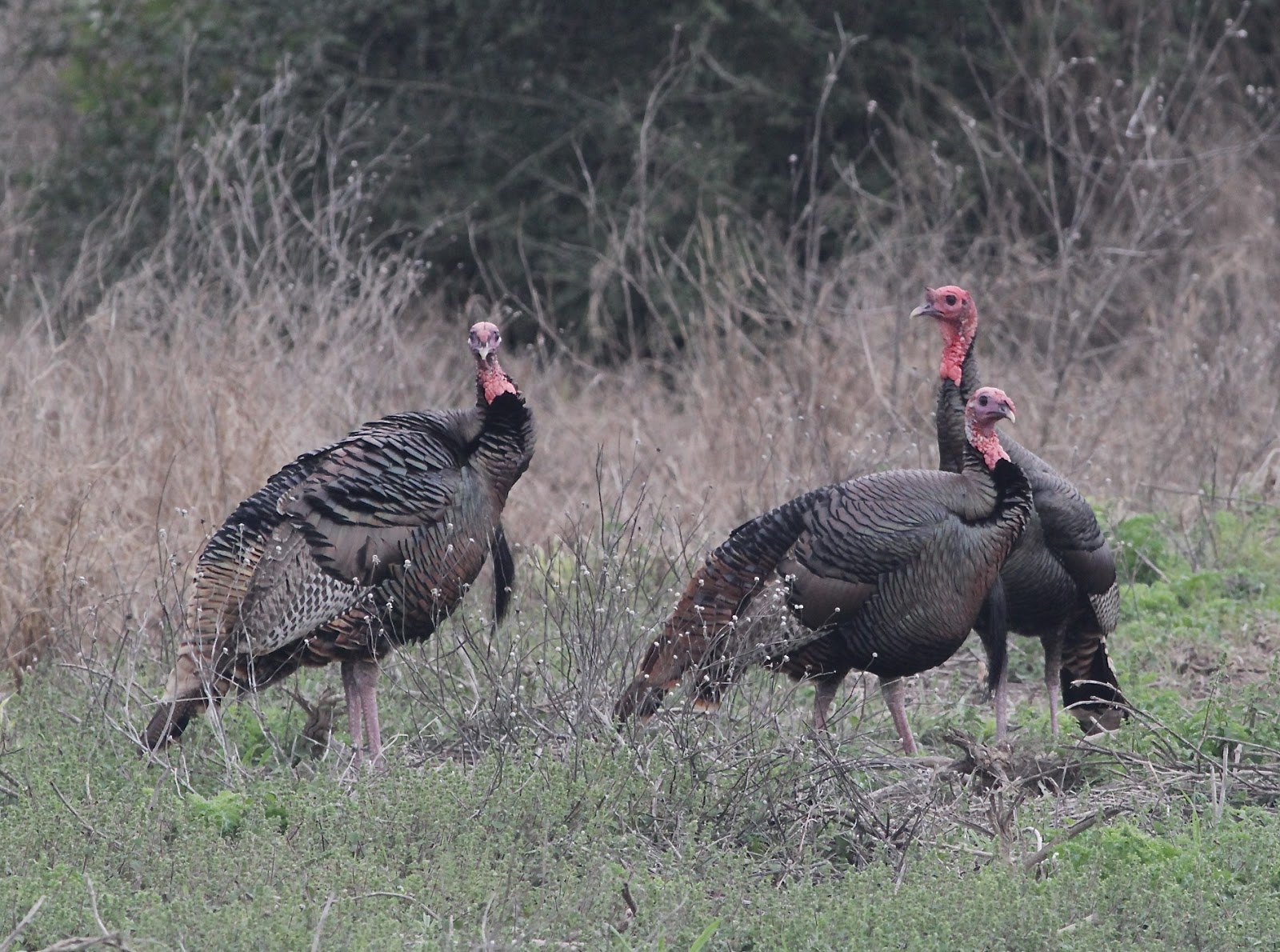 And cranes weren't the only big birds around. We also encountered a small flock of Wild Turkeys. 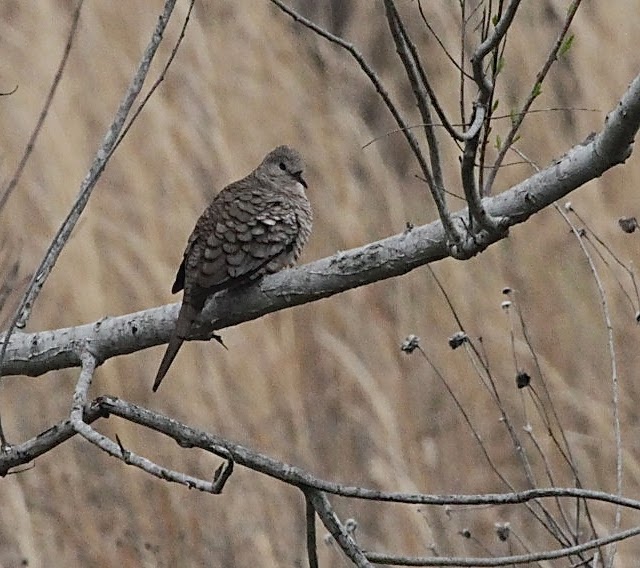 There were Inca Doves resting in the trees near a dried up pond. 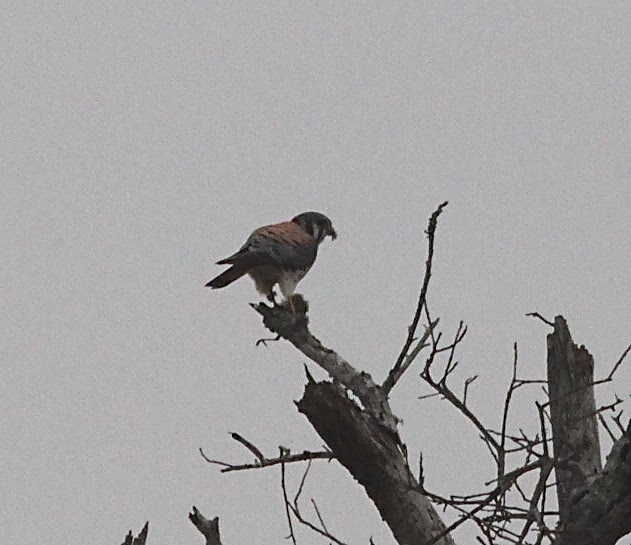 And nearby, in another tree, an American Kestrel was feeding on a bird it had caught. You can see one of the victim's legs hanging down from the limb. Another Inca Dove, perhaps? 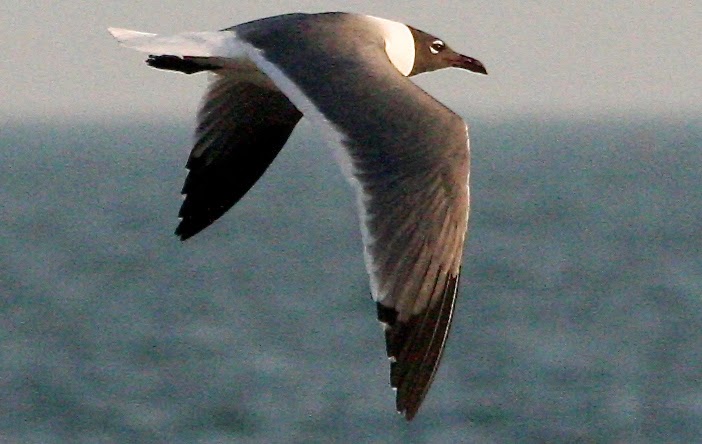 The Laughing Gulls are everywhere along the coast and their raucous "laughter" is the background music of life here. 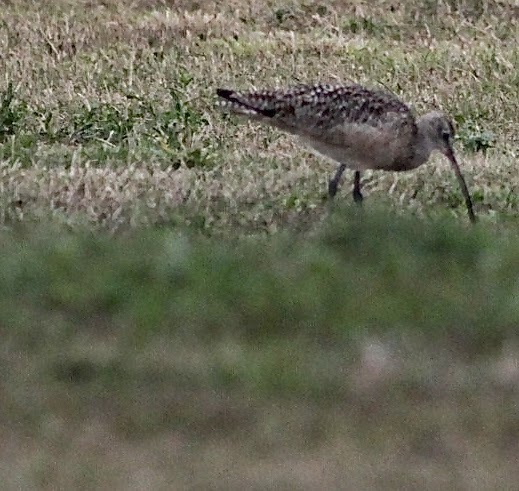 A Long-billed Curlew pokes around, looking for a tasty morsel in a field. 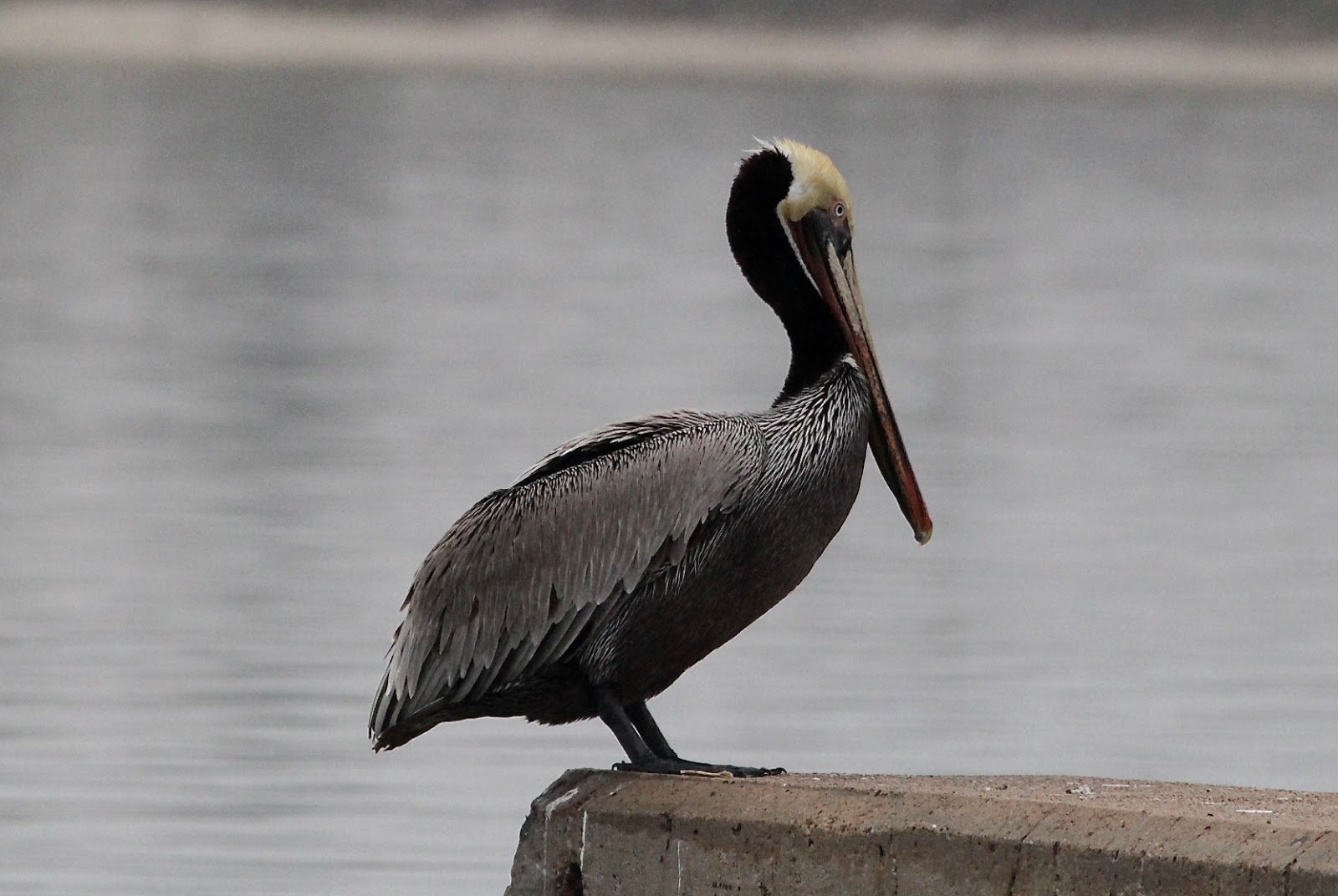 Brown Pelicans are very colorful at this time of year when they are getting ready to nest. 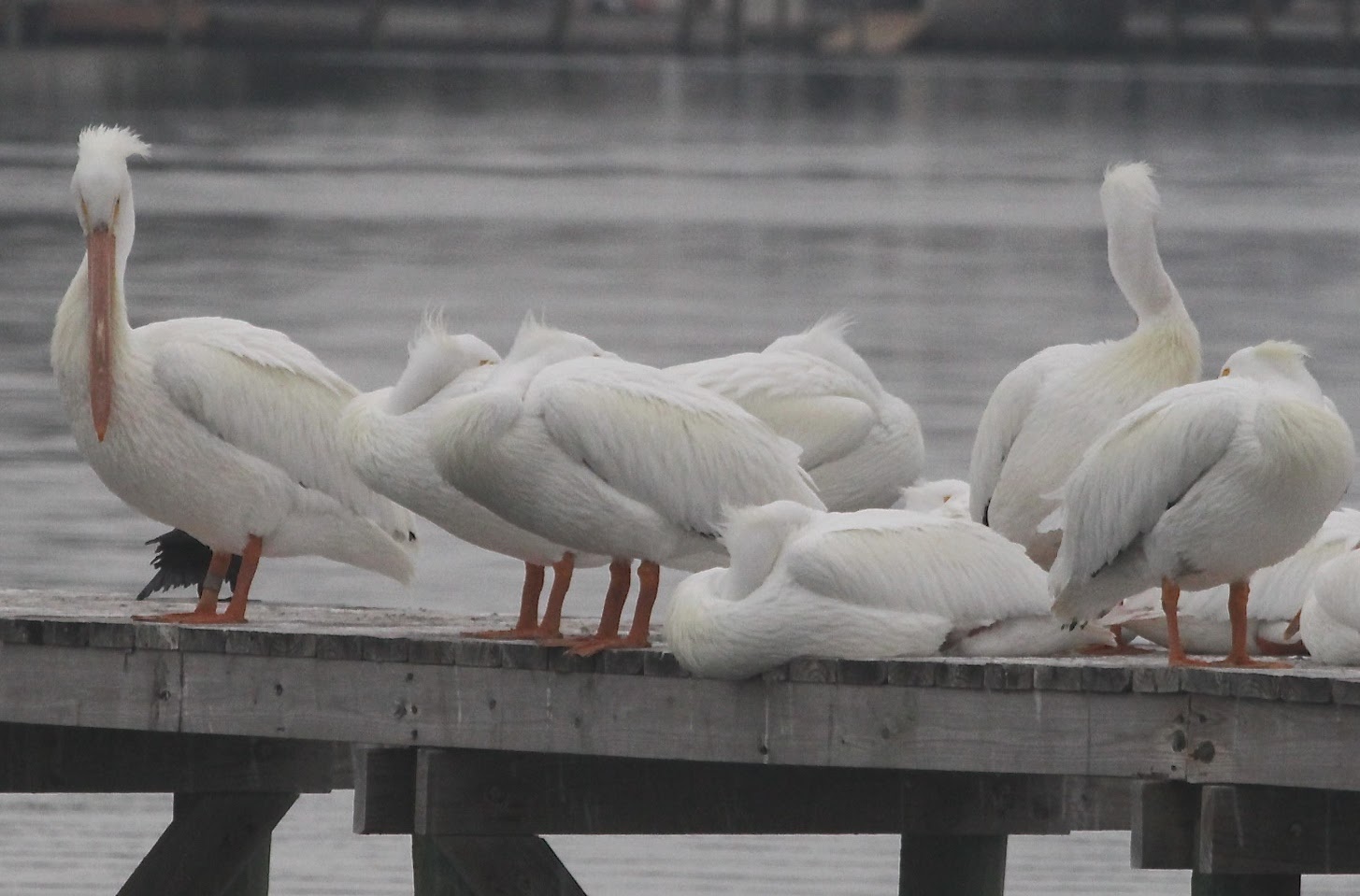 Their cousins, the White Pelicans, were surprisingly numerous. In several places, they outnumbered the Browns. 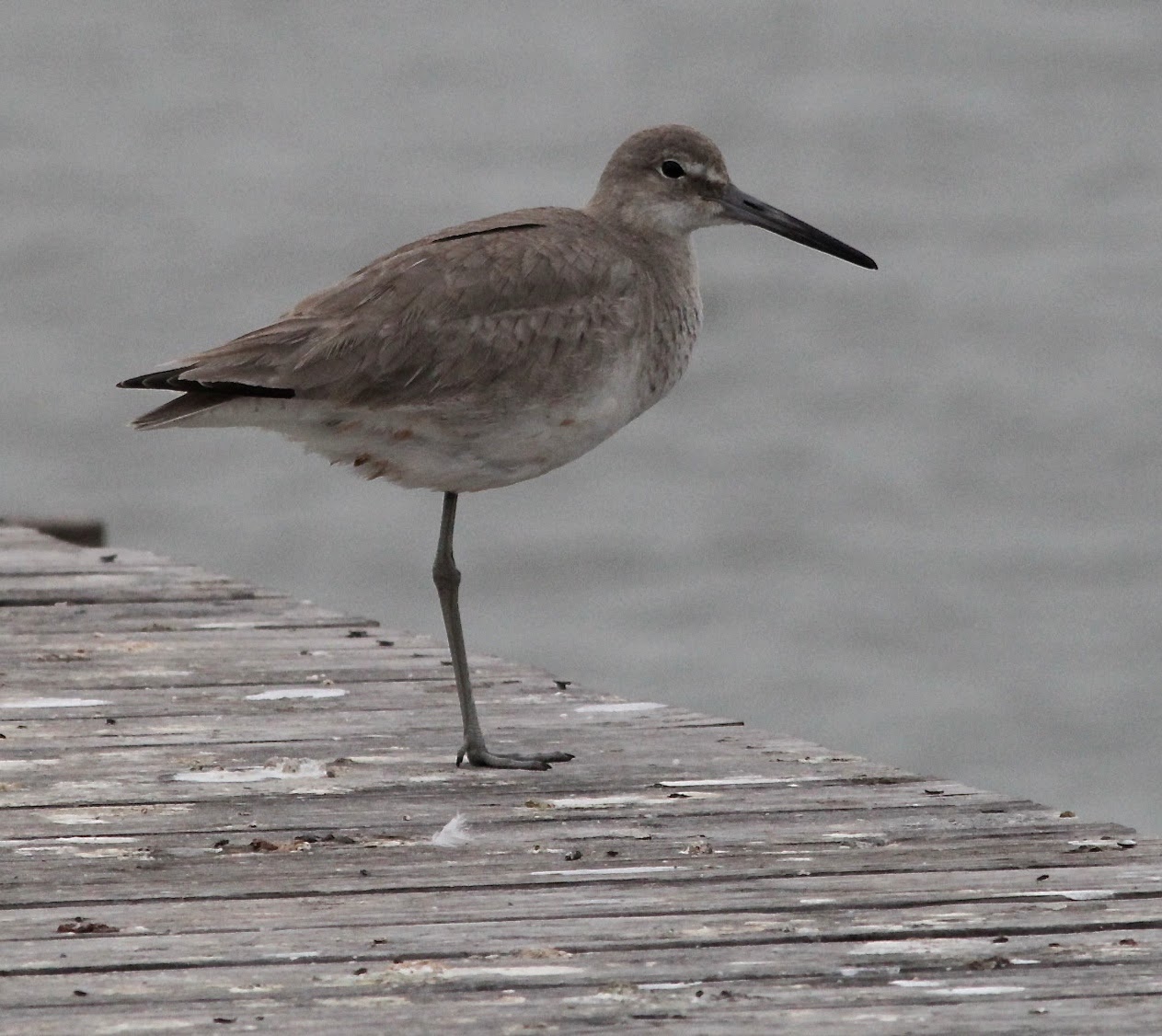 A Willet stands in its characteristic resting pose with one leg tucked up into its feathers. 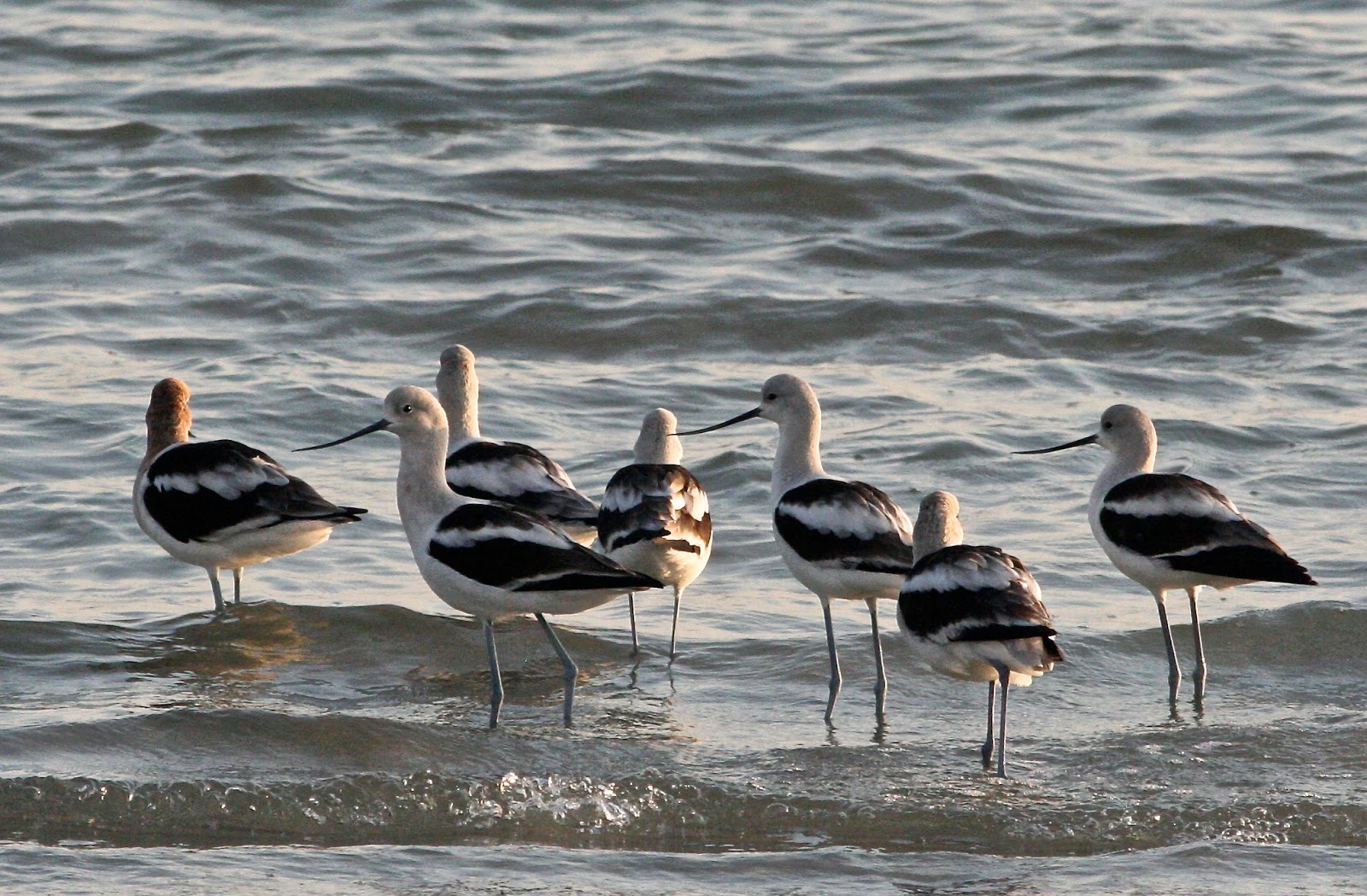 I think the American Avocet is really one of the prettiest of the shorebirds. 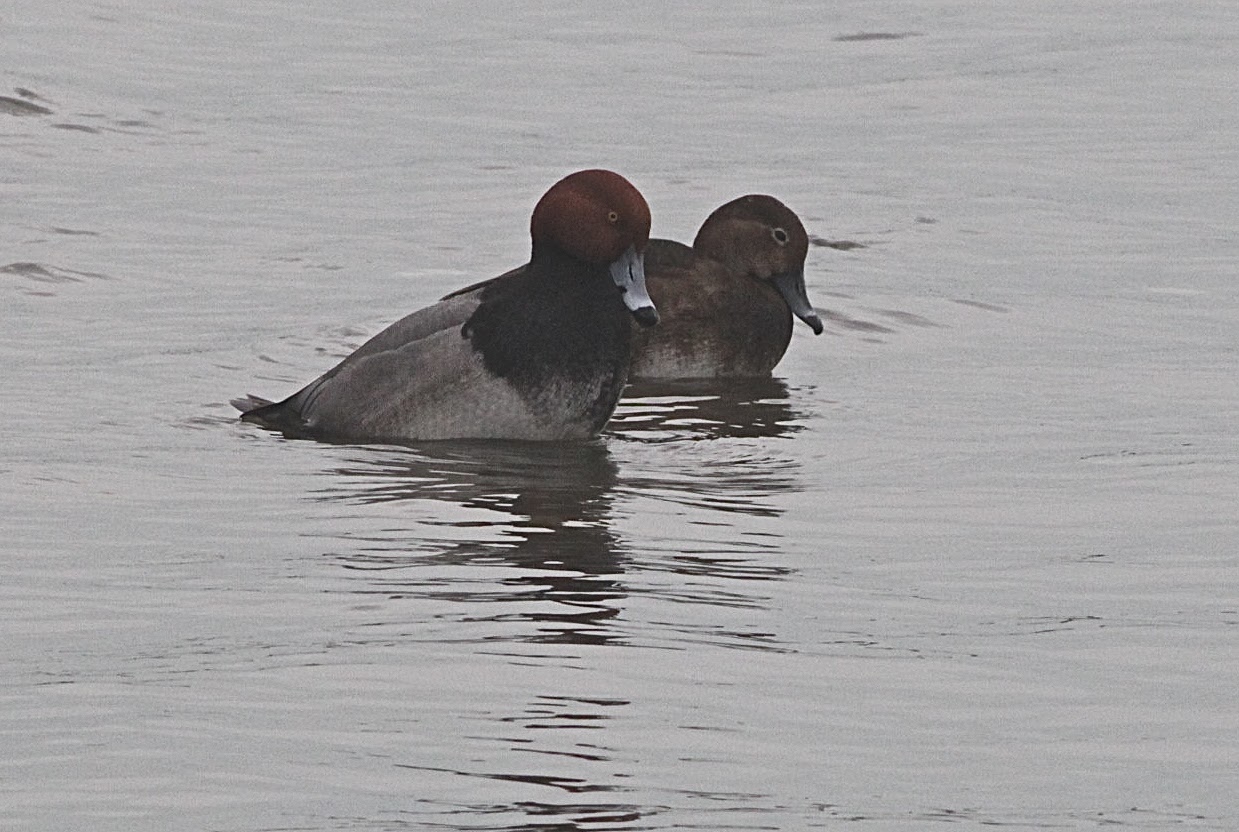 Redhead Ducks were one of the most numerous duck species that we saw, along with Ring-necked Ducks, Northern Shovelers, Lesser Scaup, and Ruddy Ducks. It was hard to get a clear picture of any of them because of the weather conditions. Here, a pair of the Redheads preen in the shallows of a lake. 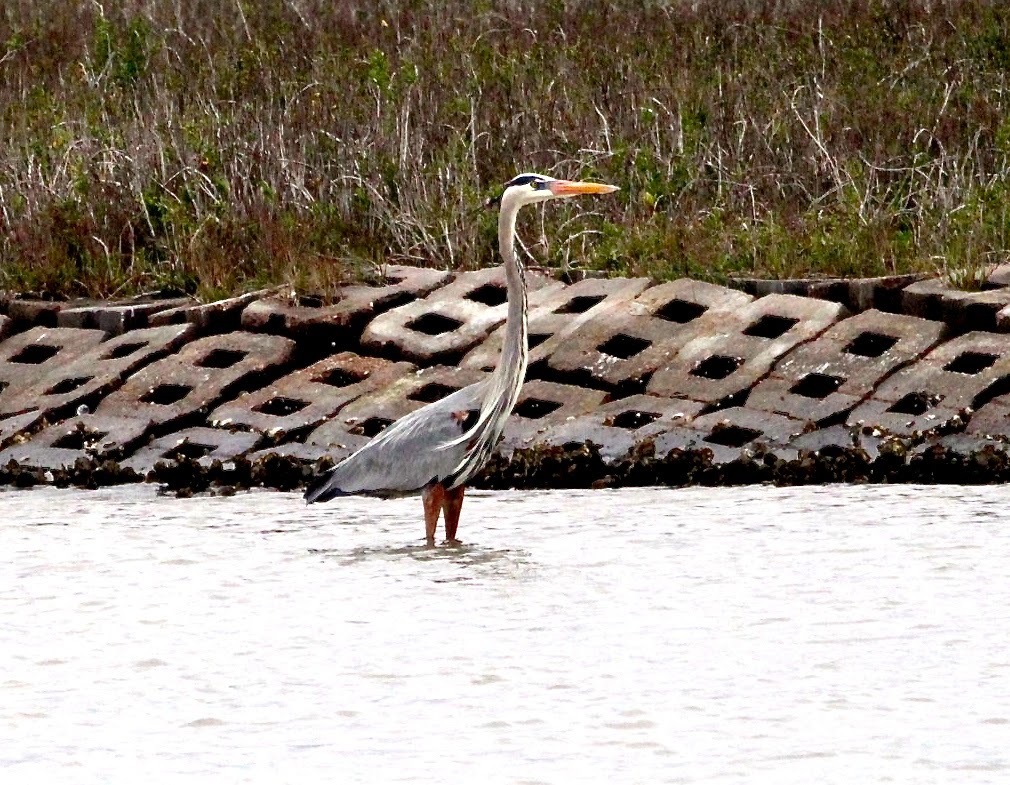 Of course, there were plenty of Great Blue Herons. This one was seen from our boat on the day we went on the Whooping Crane tour. 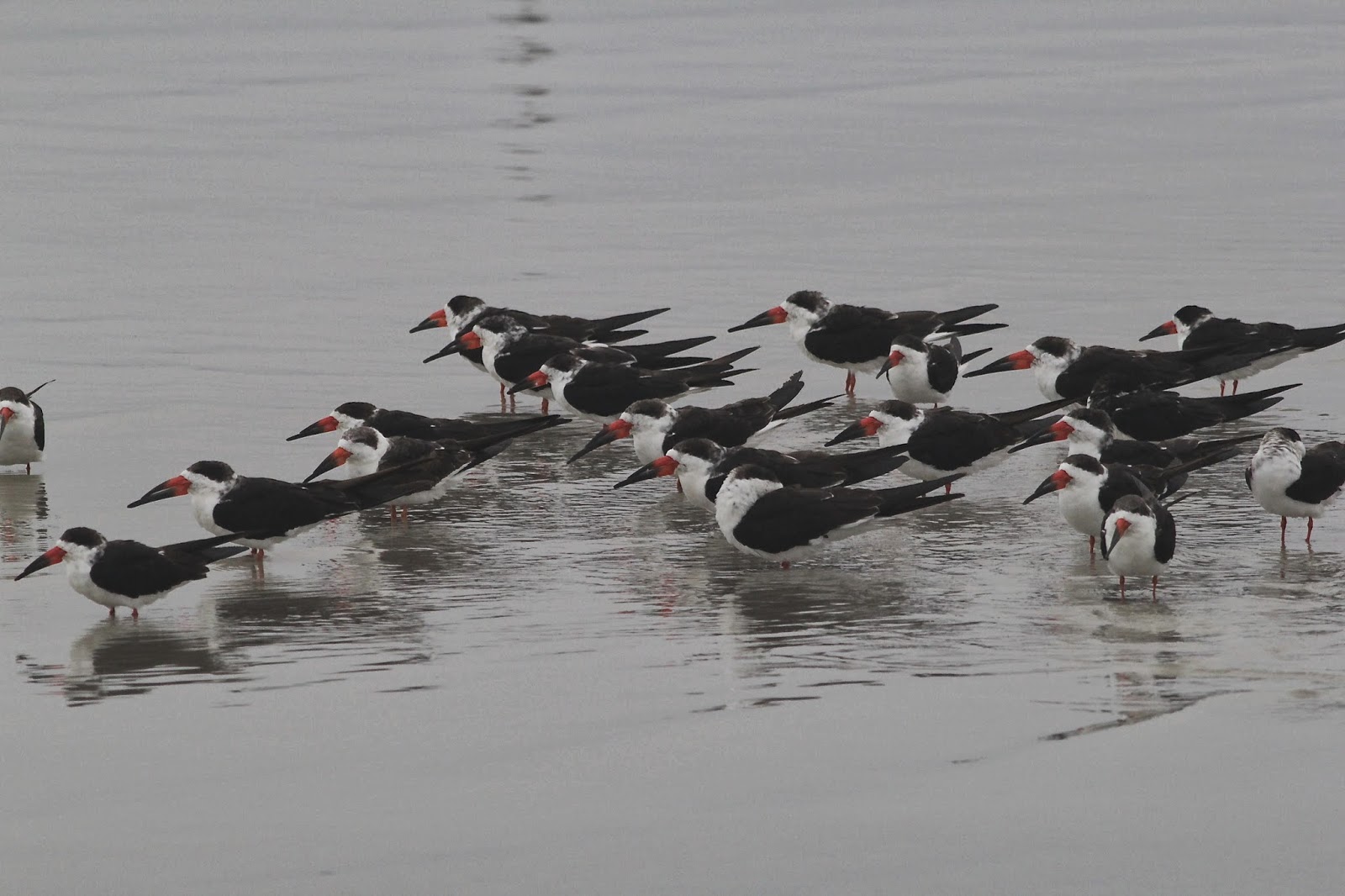 Black Skimmers are great fun to watch, whether they are skimming the surface of the water for their food or resting between snacks. 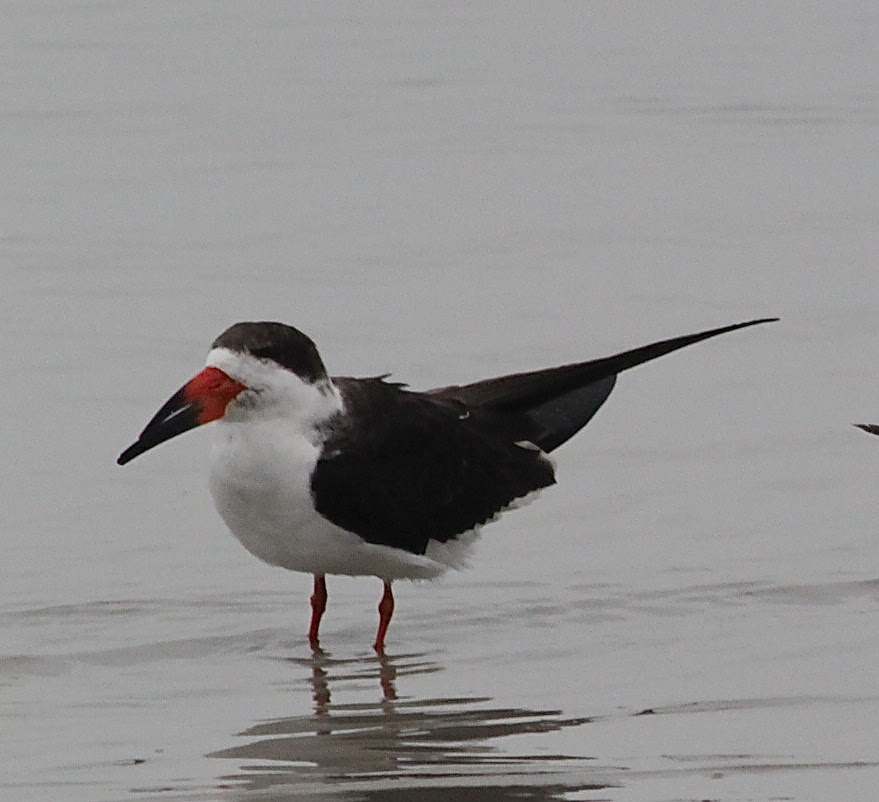 A close-up of one of the Skimmers. What a bill! 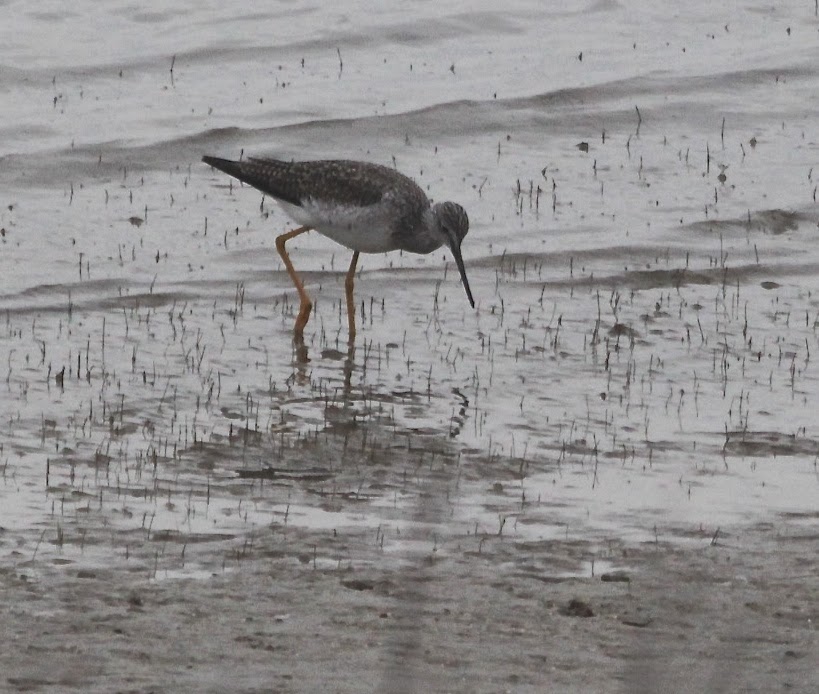 A Greater Yellowlegs probing for something good to eat. 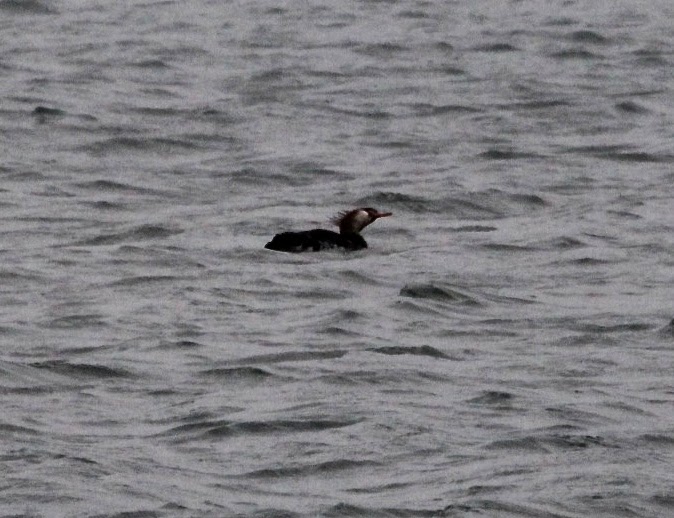 I saw this grebe at Indian Point Park at Corpus Christi. It was far out in the water on a gray and misty day and I struggled to get a usable picture of it. This was about the best of the lot. I wavered on the identification. Was it a Horned Grebe or an Eared Grebe? They can be difficult to tell apart at this time of year, but finally, based on its shape and its actions, I decided it was a Horned Grebe. I just wish I could have gotten a better picture.