We Begin at the End by Chris Whitaker: A review 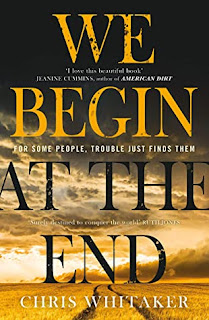 British crime writer Chris Whitaker has written a book that seems to be a homage to westerns, thrillers, and coming-of-age novels. We Begin at the End, set in coastal California and in Montana, is a bit of all three.
In 2005, we meet teenager Duchess Day Radley of Cape Haven, California, who refers to herself as "the outlaw Duchess Radley." The Radley family is haunted by tragedies the long-term effects of which they seem incapable of escaping. Thirty years before Duchess's aunt Sissy, her mother's sister, had been killed in a hit and run accident. The person held responsible for her death was 15-year-old Vincent King. Vincent was tried as an adult and sent to adult prison. His best friend, Walker (Walk), had testified against him. Walk is now chief of police in Cape Haven. In all those intervening thirty years he had maintained a connection with Vincent and now that Vincent is being released from prison, Walk goes to the prison to pick him up and bring him back to Cape Haven.
During all those years, Walk has also tried to look after Star Radley, Sissy's sister and Duchess's mother. Star and Vincent had been in teenage love and after Sissy's death and Vincent's imprisonment, Star's life went seriously off the rails. Her mother committed suicide in her grief over her daughter's death, leaving her husband Hal to take care of Star. He did his best but Star became addicted to drugs and alcohol and was victimized by a series of abusive men. Nevertheless, she was a devoted mother to Duchess and her younger brother Robin.
Vincent is not welcomed back to the community by many other than Walk. He sets to work trying to repair and restore his family home. But then tragedy strikes the Radley family again. Star is killed and who should be found at the crime scene sitting at the kitchen table in her house but Vincent, with her blood on his clothes. He tells Walk that he killed her, so the chief has no choice but to arrest him, even though he doesn't believe his confession. But he has no other explanation for what happened in that house. The only other person there was little Robin who was asleep in his room with the door locked. Duchess had sneaked out of the house on a mission of her own.
After their mother's death, Duchess and Robin are sent to Montana to live with their grandfather Hal on his ranch. It is an idyllic setting that Robin soon falls in love with but the outlaw Duchess resists. Hal is patient and kind and gives both kids all the space they need and at last, Duchess does begin to warm to him. And then tragedy strikes again.
During all this time, Walk has continued to investigate Star's death and tries to put all the pieces together, because he just does not believe that his friend killed her. As Vincent's trial nears, they call on another friend, now a lawyer but long ago Walk's teenage girlfriend, to defend him.
This plot has more twists and turns than a diamondback rattlesnake; moreover, it keeps shaking its rattles at us, often in false alarms. I confess I was not really enamored of Whitaker's style of writing here. It seemed apparent that he was attempting the style of writers of Western mystery/thrillers, but it just didn't ring true. It felt self-conscious and forced to me. The narrative was written in third person and I thought it might have been more effective if we had seen it through the eyes of the two main characters, Duchess and Walk, and if the story had been told in their voices. That being said, the story itself is very moving and I was invested in the characters' fates and hoping for a happy outcome for them. So, on the whole, not a bad read.
My rating: 4 of 5 stars
books Chris Whitaker reading reviews