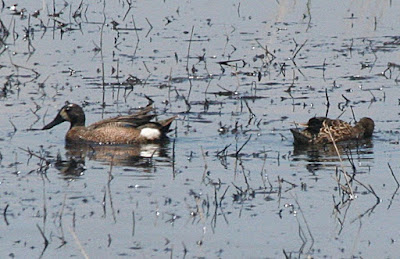 A Blue-winged Teal pair paddles among the reeds at Brazos Bend State Park.
*~*~*~*
Four years ago at the beginning of the previous administration in Washington, the Fish and Wildlife Service announced that manatees that had been on the endangered species list from the very beginning of that list were doing so much better that their status would be changed from endangered to merely "threatened." Fast forward to this month. In recent weeks, headlines have been trumpeting the fact that more than 400 manatees have died in just the first two months of the year, an alarming spike that’s well beyond what’s considered normal. As of March 5, the total was 435 and is still climbing. It seems it might be time to put them back on the endangered list.
*~*~*~*
Another endangered species whose status may actually be improving is the North Atlantic right whale. These whales gave birth to more calves during the recent winter than at any time since 2015. At least 17 newborn whales were spotted swimming with their mothers along the coast between Florida and North Carolina during December through March. One of the newborns later died after being hit by a boat, but the overall calf count equals the total of known births during the past three years combined.
*~*~*~*
California is on the brink of another drought and officials announced this week that the accumulation of snow in the Sierra Nevada mountains and the Cascades was about 40% below average levels, leaving the state with insufficient snow and rain banked to replenish its groundwater supplies, feed its rivers and streams, and fill its depleted reservoirs. This announcement comes at the end of the state's wet season.
*~*~*~*
A new study points to a difference in the choice of habitats in different parts of its range as one of the reasons that Piping Plovers appear to be doing better in the New England portion of that range than they are in the Mid-Atlantic and Southern parts.
*~*~*~*
The Mauna Loa Observatory in Hawaii has measured the concentration of carbon dioxide in the atmosphere at more than 420 parts per million. This means that human-caused global warming has taken us to the halfway point of doubling the planet's preindustrial carbon dioxide levels.
*~*~*~*
How do prehistoric stones from the Wisconsin area end up a thousand miles away in Wyoming? Scientists have an answer to that question. They believe that the stones, called gastroliths, were carried there in the stomachs of sauropods.
*~*~*~*
Atlantic salmon are perilously close to extinction in the United States. Scientists say the species could be helped enormously by the removal of a few dams along their range.
*~*~*~*
The blood of horseshoe crabs is often used in biomedical research, in such areas as the development of vaccines. These living fossils are virtually unchanged from their ancestors of 200 million years ago, but they are becoming more scarce and one way of helping them would be to find a substitute for the use of their blood in research.
*~*~*~* 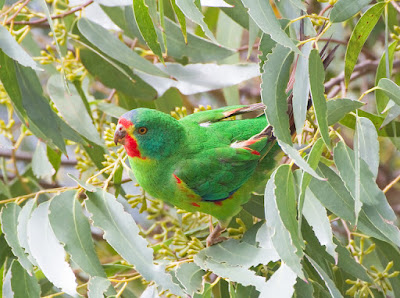 This is a Swift Parrot, an Australian species that may only have around 300 individuals left in the wild. The main threat to their continued existence is deforestation. Conservationists fear that plans in the works to help the birds may be too late to save the species.
*~*~*~*
As current coastlines continue to move further inland as sea levels rise, politicians seem loath to consider and make plans to address the problem.
*~*~*~*
Meanwhile, across the country, open-air waste pools near power plants, mines, and industrial farms pose safety hazards. Florida is currently facing such a problem with a giant wastewater pond in Piney Point, Florida that has appeared to be in danger of catastrophic failure which had led authorities to evacuate hundreds of people from their homes.
*~*~*~*
Interior Secretary Deb Haaland and the Biden administration are considering whether to restore the boundaries of Bear Ears National Monument in Utah to those set in the Obama administration or perhaps to even expand those boundaries as some Native Americans request. The boundaries of the monument were slashed by 85% by the previous administration.
*~*~*~*
Yet another area that could use some restoration is the Rio Grande Valley, home to a stunning wealth of biodiversity. The area is a vital natural resource that deserves to be nurtured and preserved.
*~*~*~*
Good news for the Piping Plovers in the Great Lakes area: The Chicago Park District announced this week that it will add 3.1 acres of Montrose Beach to the Montrose Dune Natural Area, a favored nesting ground for the little plovers.
*~*~*~*
It seems that the Gulf of Mexico and Gulf Coast region dodged a bullet with Hurrican Zeta last season. The hurricane nearly destroyed the Transocean Deepwater Asgard drilling platform in the Gulf. Its destruction would have resulted in an oil spill that could have dwarfed the Deepwater Horizon spill, a disaster from which we are still recovering and still discovering the damage that was done by it.
*~*~*~*
A salmonella outbreak in eight states has been linked to bird feeders. At least 19 people have been sickened and the disease seems to have hit birds like Pine Siskins the hardest. It is important to keep your bird feeders clean and if you notice sick birds in your yard, it might be best to take the feeders down for a while. Certainly, give them a good scrub.
*~*~*~*
Molly Roberts says the Brood X cicadas are just the bugs that we need at this time.
*~*~*~*
Weather radar can be a tool to help migrating birds. It can help predict the nights when there will be the heaviest flights and humans can be encouraged to turn off lights on those nights to keep from confusing the migrants.