Klara and the Sun by Kazuo Ishiguro: A review 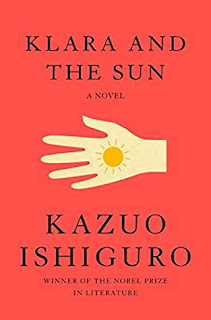 In Kazuo Ishiguro's latest book, we are at some point in the not too distant future when technology is able to create androids that are meant to be Artificial Friends, AFs in the shorthand employed in the book. Klara is an AF. Her primary source of energy is solar, thus her special relationship with the sun. Since the sun "heals" Klara, she believes that it can do the same for others and that belief plays a major role in this quite wonderful book.
Klara is described as having short dark hair and kind eyes. Her most outstanding characteristic seems to be her exceptional powers of observation. We meet her when she is still on display in the store waiting for a buyer. She resides there with other Artificial Friends and while they wait they form their own relationships. When Josie and her mother come into the store, Klara is immediately interested in her. Could she be the one, the teenager for whom Klara will get to be a friend? Almost as quickly, Josie is attracted to her and she tells her mother that Klara is the one she wants. Her mother is skeptical, but eventually, on a second visit, Josie gets her way and they take Klara home.
Klara's role with Josie will be to help her get through some lonely and difficult years until college. In this world, the kids do not go to school but are taught remotely at home through the use of "oblongs" which are apparently like iPhones or iPads. They get individual attention from teachers and relay their completed assignments to them. Thus, Josie doesn't really have contact with many kids her age and is almost friendless. She does have one very good friend who lives next door. His name is Rick and they are very close but other than that she must depend on her mother to arrange something like play dates with other teenagers. These often do not go well.
We soon learn that all is not well with Josie - literally. She is ill with some unspecified disease that may prove fatal. Her mother is consumed with guilt about this, although it isn't at first clear why. Josie's parents are separated and she only sees her father infrequently. We also learn that Josie had an older sister who died very young.
We see and hear all of this through Klara's eyes and ears. She is our narrator and our understanding is limited by her ability to interpret and convey events to us. Through her, we learn that some children are marked to be "lifted" a process that means they have a greater chance for success in life. Josie it seems is among these privileged ones. Rick, on the other hand, is not. Also, elite workers are now being replaced by machines. This is called being "substituted." Josie's father, an engineer, has been substituted. The machines are resented and so, at least in some quarters, are the Artificial Friends. Klara catches the brunt of some of this resentment.
When Josie becomes gravely ill, Klara seeks a way to help her. She turns to the sun and attempts to make a deal for Josie's life. In essence, she prays to the sun for its help. Klara may be a machine but she has true feelings for this young girl. Her friendship is in no way artificial; it is real.
So, how does it end? Are Klara's "prayers" answered? Do we get a happily ever after? That's not mine to disclose; you'll have to read the book.
I liked Klara quite a lot. She never lets us forget that she is not human; she is a machine and yet she embodies the best of human characteristics. I found it easy to empathize with her. I would like to have her as my friend.
I have not read a lot of Ishiguro. I've never read his masterpiece, Remains of the Day. I saw the movie long ago and thought it was excellent, but now I am eager to read that book and all the others I've missed along the way. I like his style of writing, the unadorned prose that tells his stories in a straightforward manner. It is very affecting and has a way of reaching straight through to the heart. The Nobel Committee did not make a mistake when they gave him that prize.
My rating: 5 of 5 stars
books Kazuo Ishiguro reading reviews