Solutions and Other Problems by Allie Brosh: A review 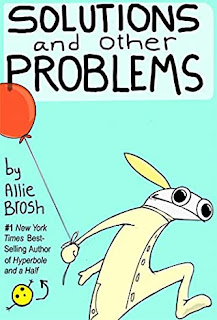 Well, that was something completely different. I don't usually read graphic novels. I'm a word person and I prefer stories told with words rather than illustrations. But this one was recommended to me for its humor and in the interest of broadening my reading horizons, I decided to give it a try.
I don't really know how typical this is of graphic novels. The drawings have an unfinished look about them and they leave a lot to the imagination. They illustrate anecdotes from the author's life, so this is in a sense a graphic memoir. That makes it a twofer for me: I don't usually read memoirs and I don't usually read graphic novels, so I'm breaking into whole new territory here.
The book comprises a series of essays relating the author's anecdotes. These start when she is three years old. She tells us that she became obsessed with her next-door neighbor, a middle-aged man, and she essentially began stalking him. Yes, I know. A three-year-old stalker boggles the mind a bit, but I'm not sure how else I can describe it. She stands in the driveway of her home staring at her neighbor while he is out and about in his yard.
While her parents are away at work, her babysitter locks the doors of the house so that her charge will not accidentally get outside, but little Allie discovers that she can escape the house by going through the doggie door and she's off to the races! At first, she contents herself with merely observing her neighbor, but then she finds that his house has a cat door and that she can enter the house through that door. She visits the house both during the day and at night and she starts taking small items from there and hiding them in her drawer. (Again I remind you this is a three-year-old doing all this.) Eventually, she is discovered and must face consequences.
She tells us that she gains a baby sister who she hates at first. But the sister grows on her. They become allies and friends and Allie ends up adoring her. As adults, when tragedy strikes that sister it is completely devastating to Allie and causes her own life to go off the rails. She suffers from depression. Her marriage falls apart. She becomes self-destructive, dabbling in various drugs and considering ending it all.
For a book that I was told would be humorous, very many of the stories it contained just seemed terribly sad to me. I got the impression in some instances that the writer/illustrator was striving to laugh at herself and her experiences and to get us to laugh at them but she might have been better served by simply acknowledging the sadness that she felt rather than trying to laugh it away.
That being said, there are moments of pure humor but they don't occur that frequently for me in this 520-page book. Looking at some of the Goodreads readers' reviews of the book reveals that many of them would disagree with me and found the book quite funny. Perhaps my sense of humor is deficient.
So, my foray into reading graphic novels was somewhat less than successful. That's not an indictment of the genre and I may try again at some point, but I freely admit that I am prejudiced and my prejudice is for words. Describe your story with words and let me draw my own mind pictures.
My rating: 3 of 5 stars
Allie Brosh books reading reviews