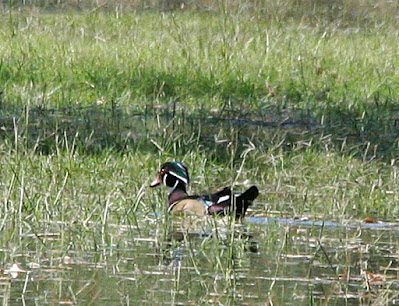 A male Wood Duck enjoys its swim among the reeds of a wetland.
*~*~*~*
Environmental Protection Agency Administrator Michael Regan has removed more than 40 outside experts appointed under the previous administration from two key advisory panels, a move he says will help restore the role of science at the agency and reduce the heavy influence of industry over environmental regulations.
*~*~*~*
When we moved to our present home some thirty-three years ago, one of our first acts was to plant oak trees in what was then a pretty bare yard. Honestly, we didn't really know what we were doing, but it turns out our instinct was correct. Oak trees support more life forms than any other trees in North America. Moreover, they are long-lived, essentially trouble-free, and magnificent.
*~*~*~*
Australia which last year suffered the harshest wildfires in its history is now suffering from historic floods that have caused nearly 20,000 people to have to be evacuated.
*~*~*~*
The 1960s have been mythologized, but the counterculture that thrived during that decade did change the world in some important ways. One of those ways was the study of whales and learning an appreciation of that unique species. That appreciation has helped to engender an effort to protect and preserve them and offers some hope for their future survival.
*~*~*~*
The Biden administration is moving to sharply increase offshore wind energy along the East Coast. It is taking initial steps toward approving a huge wind farm off the New Jersey coast as part of an effort to generate electricity for more than 10 million homes nationwide by 2030.
*~*~*~* 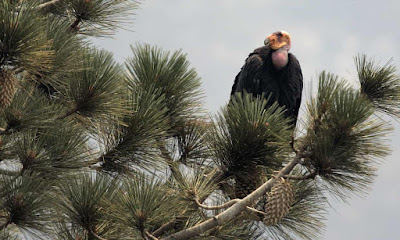 The endangered California Condor once soared the skies from British Columbia to Mexico before habitat loss, overhunting, and poisoning from hunting ammunition almost drove them to extinction. But they will soon be returning to the skies of the Pacific Northwest with an assist from the Yurok Tribe whose ancestral lands encompass large swaths of the forest there. The Yurok people are creating a captive breeding program that will prepare condors for release into the wild as early as this fall.
*~*~*~*
Fossil fuel industries in this country have a long history of supporting white supremacy and that has helped to skew their policies toward minority communities, including their hiring practices which often have discriminated against people of color.
*~*~*~*
Based on Christmas Bird Count data, it appears that waterfowl are staying farther north in winter as that season gets warmer. Populations of waterfowl in the South are proportionately dwindling as many birds that would normally be there are choosing to stay in more northerly climes.
*~*~*~*
Data recently released by the University of Maryland shows that the planet lost an area of tree cover larger than the size of the United Kingdom in the past year. Tree cover loss rose in both the tropics and temperate regions, but the rate of increase in loss was greatest in primary tropical forests, led by rising deforestation and incidence of fire in the Amazon, Earth’s largest rainforest.
*~*~*~*
In another sign of the effects of climate change, the city of Kyoto had its earliest peak of cherry blossoming in 1,200 years. Peak bloom came on March 26 this year beating the previous record by one day.
*~*~*~*
Although the use of pesticides has fallen in recent years, a study shows that the effect of pesticides on bees and other pollinators has doubled in the past decade, contradicting claims that the toxic damage done to the environment by pesticides is declining.
*~*~*~*
Here's an interesting story from the world of prehistory about a wooden sculpture that has been found and dated to 12,500 years ago. It is the earliest known work of ritual art that has ever been found.
*~*~*~*
The massive infrastructure plan announced by the Biden administration this week is about a lot more than just roads. It also seeks to address the existential threats of climate change and of racial inequality and other problems that impact infrastructure in sometimes unacknowledged ways.
*~*~*~*
Marbled Murrelets' choice of breeding location is influenced, it seems, by the sounds that they hear. If they can hear other murrelets calling in the area, they are more likely to select the spot for their nest.
*~*~*~*
A new study theorizes that perhaps 80% of species that are presently unknown to science are likely to be found in the tropical forests in countries like Brazil, Indonesia, Madagascar, and Colombia.
*~*~*~*
Anecdotal evidence has pointed to a decline in firefly species in North America. Now a new scientific assessment of the extinction risk for firefly species in Canada and the U.S. reveals that 11% are threatened with extinction, 2% are near threatened, 33% are categorized as least concern, and more than half are data deficient and their status is unknown.
*~*~*~*
Beset by a number of problems, the kelp forests of northern California have collapsed and scientists say they may not be able to recover anytime soon.
*~*~*~*
Egyptian Vultures face greater dangers in southeastern Europe and in the Middle East than they do in Sub-Saharan Africa. The causes of their mortality in those areas are primarily human.
*~*~*~*
Grizzly bears like the same kinds of trails that are typically made for humans to hike in parks which may increase the likelihood of the two species coming in contact with each other.
*~*~*~*
A sick Bald Eagle rescued on Ocracoke Island in North Carolina turned out to have a serious case of lead poisoning from the lead shot used by hunters who do not heed the warnings about the dangers of such ammunition.
*~*~*~*
There was a boom in gardening last year as people stuck at home because of the pandemic had more time for such activities. The boom seems to be continuing into the present year. Perhaps a new generation has been converted to the joys of gardening.
*~*~*~*
The native plant versus nonnative plant debate continues. It is complicated by the fact that we have cultivated some nonnative plants for so long that we no longer recognize them as nonnative and they are often some of our favorite plants.