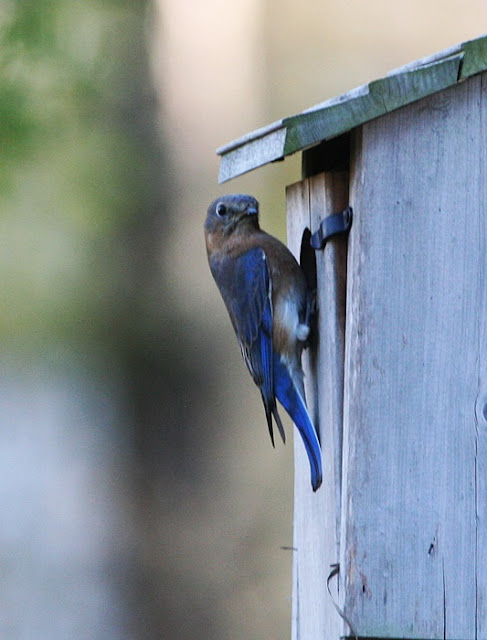 A female Eastern Bluebird checks out a nest box.

The United States president continues to take advantage of our distraction by the pandemic and now the protests against police brutality against black people in order to roll back every possible environmental protection rule that he can. When this toxic presidency is finally over, it may take a generation to undo the damage he has done, if, in fact, it can all be undone.

This has been "Black Birders Week," a response to the recent notorious incident in Central Park when a white woman called the police on a black male birder who had had the temerity to ask her to leash her dog. It is the hope of organizers to call attention to the racial disparity in the hobby where black people are under-represented and to encourage more black people to get out and enjoy the wonders of Nature.

A new study estimates that as many as five hundred species may become extinct over the next two decades and finds that mass extinctions are accelerating.

"Backyard and Beyond" has a post about the aforementioned Central Park incident and about birding in the Rio Grande Valley and being frequently accosted by Border Patrol agents. 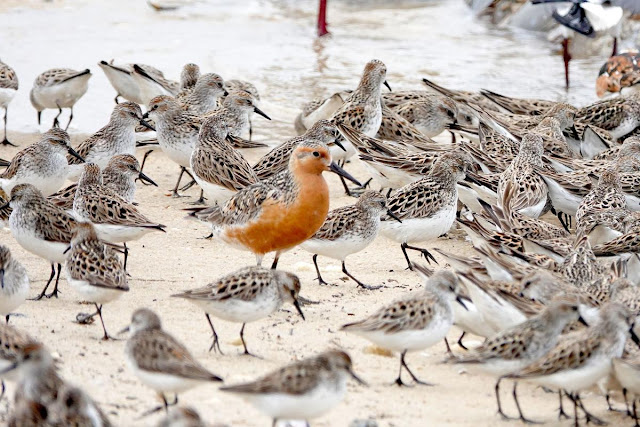 The numbers of the threatened Red Knot, seen here in the middle of a flock of shorebirds, are down on the New Jersey shore, possibly because a prime source of their food, the eggs of the horseshoe crab are also down. The spawning of the crabs so far this spring has been somewhat poor. The crabs are also harvested for their blood which is used in medical research. Animal rights groups are pushing for the use of a synthetic alternative.

Last summer the waters in the Bristol Bay region of Alaska were too hot for the sockeye salmon to spawn. Thousands of the fish that made their way up the rivers to spawn instead ended up dead on the river banks. Fishermen who depend on the fish are concerned about a repeat this year.

Total atmospheric carbon levels continue to climb even though emissions have been temporarily reduced because of the pandemic.

An international team of scientists, including a prominent researcher at the Wuhan Institute of Virology, has analyzed all known coronaviruses in Chinese bats and used genetic analysis to trace the likely origin of the novel coronavirus to horseshoe bats. The U.S. grant that aided in the research that made that discovery has now been canceled.

The hurricane season is here and meteorologists have predicted an active season for Atlantic hurricanes. Unfortunately, most Americans who might be affected do not have flood insurance.

An invasive pathogen that came to Australia ten years ago has almost wiped out the once-common native guava. The pathogen is a fungus called Austropuccinia psidii and it causes a disease called myrtle rust.

When storms hit urban areas, the poorest neighborhoods of those cities are the most seriously affected by floods. 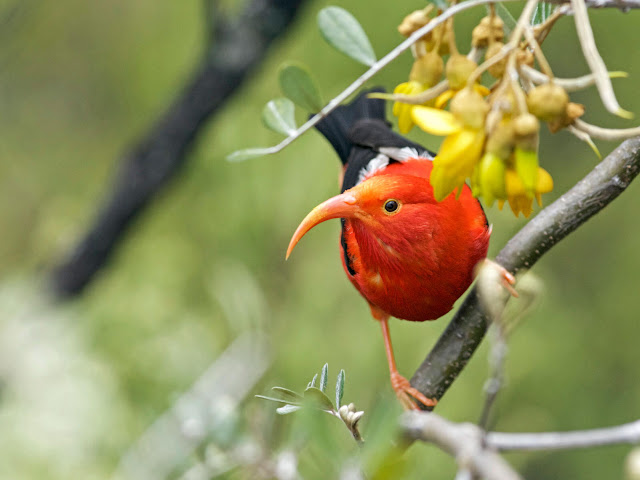 This Tiwi, along with many other native Hawaiian bird species, is seriously threatened by the effects of climate change and by introduced invasive species like mosquitoes.

Native Brazilian bees are vital for the pollination of crops but they are being decimated by the agricultural practices of the country.

Interestingly, urban red foxes have evolved smaller brains and a different snout shape from their rural cousins. These adaptations allow them to better utilize food sources available in the city.

A University of Wyoming study concluded that Great Gray Owls could suffer a loss of genetic diversity due to the fracturing of their range.

Australian conservationists believe that the nation's laws are failing to adequately protect threatened birds such as the Carnaby's Black-cockatoo, the Grey Range Thick-billed Grasswren, and the Swift Parrot. They are seeking changes to the environmental laws to provide better protection.

New Jersey is the first state to incorporate climate change information into its kindergarten to 12th-grade curriculum. It is hoped that other states will follow its lead.