The Delightful Life of a Suicide Pilot by Colin Cotterill: A review 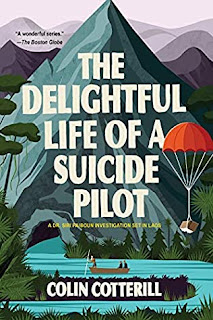 This is another series I have avidly followed over the years. Dr. Siri, the one-time state coroner, now retired, of Laos, has been a delightful companion through all the previous fourteen books of the series, but now the author and publisher tell us number fifteen will be the last. I'm thinking that is probably a good thing. This one seemed a bit stale and the plot is basically the same one that has served the author well throughout the series, but perhaps it is time to give it a rest.

It is 1981 and Laos is still struggling to make a go of its newly installed socialist government. That was the revolution that Siri and his best friend Civilai and his now-wife Madame Daeng had supported and fought for during all the years of the struggle. But their victory has been bittersweet. Corruption is rampant in the new government and it has not brought the succor and relief to the ordinary citizens of the country that the revolutionaries had once dreamed of.

Now, both Siri and the twentieth century are in their eighties. Although he did finally manage to retire from his position as coroner, he still visits the morgue regularly and maintains an interest in what goes on there. And he spends his days helping Madame Daeng in her noodle shop, where the best noodles in Vientiane are sold. But his friend Civilai is dead and he feels that loss keenly. He no longer has anyone to sit with him on his favorite log by the Mekong and eat lunch while sharing the latest gossip.

Regardless of his age and the aches and pains that go along with it, Siri's appetite for life and adventure remains high, so when he receives a strange bilingual diary, half in Japanese and half in Lao, he is intrigued and he is determined to discover who sent it to him and why.

He is at a disadvantage because he cannot read Japanese and doesn't have easy access to anyone who can translate, but he soldiers on reading the parts he can understand to Madame Daeng each night. Most mysteriously, there was a note attached to the diary that said, "Dr. Siri, we need your help most urgently." There is no name or return address. "We" remain anonymous.

It becomes apparent that the diary was written during World War II, evidently by a Japanese soldier stationed in Laos. Siri discovers that the author was a kamikaze pilot and that he was in charge of a salvage operation in the town of Thakhek. With the help of his friend police chief Phosy, he finagles a ride to Thakhek, along with Madame Daeng, to investigate further.

While he and Madame Daeng travel to Thakhek, Phosy and one of his officers go to Vang Vieng to search for another officer who had disappeared there when he was sent to interview a woman. Soon Phosy and both of his officers find themselves in a world of trouble and their prospects for extricating themselves do not look good.

Meanwhile, in Thakhek, Siri and Madame Daeng have uncovered more than they bargained for, including a likely hub for human trafficking. We know, of course, that in the end Siri will solve all the mysteries and bring justice to those deprived of it. The story of how he gets there is, as always, filled with humor and Cotterill's light touch. If only we had a humane Dr. Siri to solve all our puzzles and bring justice in real life.