The Nickel Boys by Colson Whitehead: A review 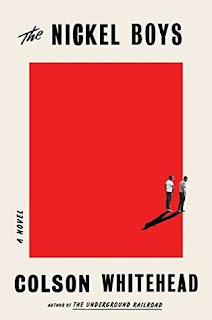 The horrific story told by Colson Whitehead in his 2020 Pulitzer Prize-winning novel, The Nickel Boys, is made more horrific by the knowledge that it is based on a true story. In 2014, Whitehead learned of the project of archaeology students at the University of South Florida who were digging up remains of boys who had been tortured, raped, mutilated, and killed at a state-run school called Dozier School for Boys in the Florida Panhandle town of Marianna. The bodies were then deposited in a secret graveyard. The Dozier School was in business for a century and only closed in 2011. The graves of its victims were still being discovered even after Whitehead's book was published. It's unlikely that there will ever be a full accounting of the number of boys who were buried in all those hidden graves, but what is known is gruesome and nightmarish enough.

Whitehead recreates Dozier as the Nickel Academy of Eleanor, Florida. It's a place where "delinquent" boys are sent by the courts. White, black, and Hispanic boys are sent there, but conditions are slightly better for the white boys. The lash literally falls most heavily on the black boys whose stories are told through the experiences of a teenager named Elwood Curtis.

Elwood's parents had abandoned him at age six to the care of his grandmother while they headed to California. The grandmother, Harriet, was a cleaner in a Tallahassee hotel. Her family history is a litany of tragedies that would not be unfamiliar to many families whose ancestors were victims of America's original sin of slavery. She was a tenacious and strong woman who was determined that her grandson would have a better life. She raised Elwood to be a diligent student and to strive to improve his lot by going to college. It is the 1960s and she gives him a record of Dr. Martin Luther King's sermons. It's the only record he owns and he listens to it over and over and is inspired. He also has the good luck to have a teacher who recognizes his intelligence and his striving and who informs him of advanced classes he might take at a nearby technical college. But then his luck runs out.

He wants to visit that technical college and he tries hitchhiking to get there. He is picked up by a black man who, it turns out, has stolen the car he is driving. When the police stop the car, they arrest not only the driver but Elwood as well, even though he had no knowledge of the crime. He is convicted, of course, and the judge sends him to Florida Industrial School for Boys, an institution for nonviolent offenders that calls itself a reform school and its inmates students. As Elwood soon learns, all the violent offenders were on the school's staff.

More informally the Florida Industrial School for Boys is known as Nickel for Trevor Nickel who was the school's director during the World War II era, and so inmates became "Nickel Boys." Nickel got the job of director by impressing the local Ku Klux Klan with speeches about moral improvement and the value of work, and as director, he liked to watch the boys shower allegedly in order to monitor their fitness and the progress of their physical education. This was the cesspool into which poor Elwood had been dropped.

Once dropped in the cesspool, there were essentially five possible ways out:

Elwood's time at Nickel is a monstrous litany of almost incomprehensible suffering. It makes for harrowing reading, even as Whitehead relates the story in the straightforward, unembellished voice of someone just stating the facts. The only saving grace for me was that the book was short, just over 200 pages. I'm not sure how much more I could have stood. And yet all I had to do was read about it; the boys of Dozier (Nickel) actually had to endure it. Until they couldn't.

Whitehead is a brilliant writer and his book deserves all the accolades it has received. Moreover, it deserves to be even more widely read by those who may still harbor illusions about the benevolence of our society's treatment of children, particularly black children, in institutional care. Or, for that matter, even if they are not in institutional care. The wages of our original sin continue to be paid. We hear about it in the news every day.