November 17, 2018
A roundup of the week's news of birds and the environment: 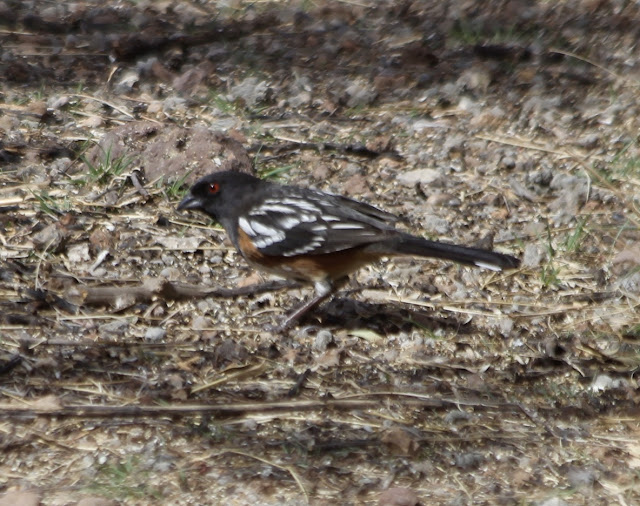 I photographed this Spotted Towhee on the grounds of the Chihuahuan Desert Research Institute and Nature Center in West Texas last March. Those ruby red eyes are mesmerizing.

The devastating wildfires raging in California are creating problems not only for those whose homes have been destroyed or who have lost loved ones in the flames. The smoke from the fires is affecting air quality in the region. The air was so thick on Friday that it ranked among the dirtiest in the world. The fires are being fed by the driest vegetation ever measured in Northern California so late in the year. The dry vegetation is the result of an exceptionally hot and dry summer and that, in turn, can be traced back to the changing climate that continues to heat up.

On Friday, the current president announced his intention to nominate a former coal lobbyist to be administrator of the Environmental Protection Agency.

The petrochemical industry anticipates spending a total of more than $200 billion on factories, pipelines and other infrastructure in the United States that will rely on shale gas. Construction is already underway at many sites. The building spree would dramatically expand the Gulf Coast’s petrochemical corridor (known locally as “Cancer Alley”) and establish a new plastics and petrochemical belt across states like Ohio, Pennsylvania and West Virginia. All of this is very bad news for a world already drowning in plastic.

A new study has revealed that birds in the Andes are moving up the mountains to get to a cooler climate and escape the hotter conditions below, but there's only so far that the birds can go. What will happen when they've reached the limit of appropriate habitat?

A study of beetles has revealed one possible contributing factor to the worldwide loss of insect population. It seems that heat waves affect the insect's ability to reproduce by reducing male fertility.

On the other hand, it seems it takes more than a category 4 hurricane to discourage the spotted seatrout from reproducing. On August 25, 2017, when Hurricane Harvey slammed into the Texas coast with 145 MPH winds, it passed over the spawning grounds of the seatrout which were in the midst of mating. Undeterred, they just got on with it!

Meanwhile, research has confirmed that climate change is increasing the strength of hurricanes and making them more destructive. Scientists predict that rainfall from hurricanes could be increased by a third and wind speeds boosted by 25 knots if global warming continues.

Evening Grosbeaks are stunningly beautiful birds and seeing a flock of them is a never-to-be-forgotten experience. I have vivid memories of the winter when thousands of the birds descended on our yard in northeast Texas. They are known to be enthusiastic winter wanderers, though I've never seen them this far south. They have been visiting in New Mexico recently, however. Maybe there is hope for us this winter. 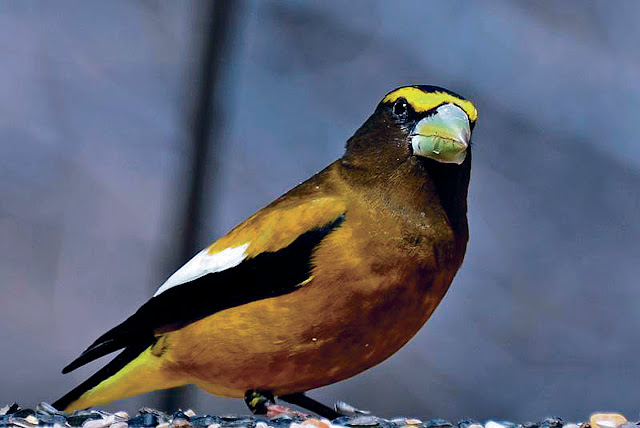 *~*~*~*
Scientists behind a major study that claimed the Earth’s oceans are warming faster than previously thought now say their work contained inadvertent errors that made their conclusions seem more certain than they actually are. Two weeks after the high-profile study was published in the journal Nature, its authors have submitted corrections to the publication. Because when scientists make errors they point it out and correct it.
*~*~*~*
Buried beneath a half mile of snow and ice in Greenland, scientists have uncovered an impact crater of an asteroid large enough to swallow the District of Columbia. It is the first impact crater found under Earth's ice sheets. The finding suggests that the giant iron asteroid smashed into what is today a glacier during the last ice age, an era known as the Pleistocene Epoch that started 2.6 million years ago. When it ended only 11,700 years ago, mega-fauna like saber-toothed cats had died out while humanity had inherited the Earth.

Maybe size really doesn't matter. At least to House Sparrows. There has been a hypothesis around for a while that the larger the black bib of a male sparrow the higher his status in the flock. Now an international team of researchers has knocked holes in that hypothesis, showing that there is really no evidence to support it.

The Yellowstone National Park that will be visited by future generations is likely to be quite different from the one that we know and love because of the effects of a warming climate.

Reintroducing big cats, like tigers, to areas where they have been extirpated requires a lot of preparation and education of the local population to teach them how to live with the animals once again.

One approach to helping the critically endangered red wolf increase population is to introduce captive bred pups into wild-born litters to be fostered. The Fish and Wildlife Service has done this successfully in some cases.

The Willow Warbler is a tiny bird and yet it has one of the longest migration routes for a species weighing ten grams or less. It typically flies more than 8,000 miles to reach its destination. Birds never cease to amaze me.
weekly roundup