Godsend by John Wray: A review 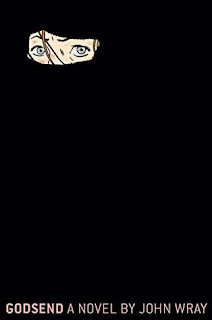 John Wray was inspired to write his book by the story of the young American, John Walker Lindh, who became known as the "American Taliban." Lindh was captured as an enemy combatant during the U.S. invasion of Afghanistan after 9/11, but he was a rather pitiable character who had apparently been originally inspired by idealism and a desire to study Arabic, for which purpose he had traveled to Yemen. Somewhere along the way he became radicalized and went to aid the Taliban in Afghanistan and he had the misfortune to still be there when the Saudi-led attack on the United States occurred.

Wray's main character is an idealistic 18-year-old from Santa Rosa, California, who makes a plan to travel to Peshawar, Pakistan, to study Islam at a madrasa. So far, not so different from Lindh, but there is one very important difference: She is a young woman.

Aden Grace Sawyer was an outsider, a loner. She had only one real friend. Her parents were separated and she lived with her mother, a hopeless alcoholic. Her father, who had been unfaithful in the marriage and had moved out, was a secular scholar of Islam. Aden despises her parents and her life and seeks to escape. She feels empty and wants something to fill her life with purpose. She becomes intrigued with the idea of studying Islam and devoting herself to the "struggle," and with her friend, Decker, develops the plan to go to Pakistan.

They get financial help for the trip from their local mosque and Aden shaves her head, binds her breasts with an Ace bandage, and secures a supply of pills to stop her menstrual cycle. As a woman, she could not study at the madrasa and so she will be a man. This may remind you of Isaac Bashevis Singer's story of Yentl, the rabbi's daughter who disguised herself as a boy in order to study at yeshiva. I find the parallels both revealing and ironic.

Once the two adventurers arrive at the small rural madrasa where they will study, they must choose new names. Aden takes the name Suleyman, which was also the name - or similar to it - that Lindh adopted and she begins her training.  It begins with learning the suras of the Qur'an by heart and progresses on to actual military training. Through a series of events, she ends up on the front lines of battle in Afghanistan just prior to the attacks of 9/11.

Aden/Suleyman is never completely trusted by the militants. They see her as something exotic. She is constantly in fear of being found out and knows the fate that would await her if she is.

The men continue to be suspicious of her and don't seem to know what to make of her, but she does become close to one of them, a leader who may, in fact, have known her secret.

Wray writes very convincingly about Islamic theology and about the religious fervor that motivates his characters. This is, in some ways, a religious thriller with the main character experiencing the terror of potential discovery. The writer makes this terror palpable and it is obvious that he has spent some time mastering the subject of life in Afghanistan and Pakistan and warfare as it is practiced there. He makes it all very real for the reader and he builds the tension to an intensely devastating ending.

I don't remember where I first heard of this book, but I was intrigued by its premise and immediately put it in my reading queue. I'm very glad I did. It's a book and an ending that I won't soon forget.