February 18, 2017
A roundup of the week's news of birds and the environment: 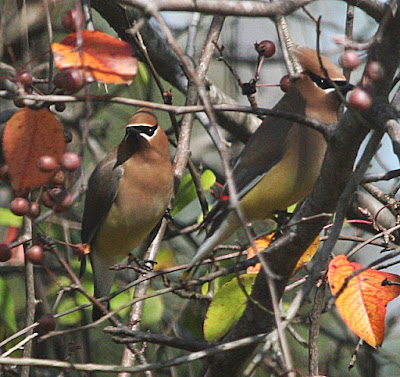 Cedar Waxwings photographed on one of my previous Great Backyard Bird Counts. This year's count continues all weekend, through Monday, so plenty of time for you to participate.

An avowed enemy of the Environmental Protection Agency, who would like nothing better than to see it destroyed, has been approved by the Senate as the new head of that agency. Scott Pruitt, Oklahoma's attorney general, who has made a career out of suing the EPA on behalf of gas and oil companies, will now be able to work to destroy the agency from within. Republicans refused to delay the vote on his confirmation even though a judge had ordered release of Pruitt's emails that he exchanged with oil and gas executives to be accomplished next Tuesday. I guess emails aren't important when they are written by Republicans.

Meanwhile, William Happer, the man who has been tipped as science advisor to the new president, refers to climate scientists as a "glassy-eyed cult."

The 66-year-old Laysan Albatross known as Wisdom has hatched another chick at her nest on the Midway Atoll National Wildlife Refuge and Memorial. 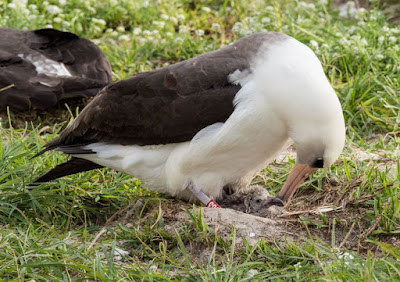 Mama Wisdom with her new chick.

It's time to start planning your backyard wildlife garden. The Meadowlands Nature Blog gives some tips and lists resources.

In 2005, three environmental groups filed a motion with the federal government as a part of the Oroville Dam's relicensing process. They urged the government to require that the dam's emergency spillway be lined with concrete rather than remain as an earthen hillside. If that action had been taken, it likely would have prevented the risk of collapse that resulted in the emergency evacuation of some 185,000 people this week. Unfortunately, their motion was ignored.

Pesticides, paving, and higher temperatures have contributed to the drop in butterfly populations in the U.K. as they have here. Studies show that the urban populations there have declined more rapidly than the rural ones over the last twenty years. Urban populations have dropped by 69% compared to 45% for the countryside.

But on the bright side, the California Pipevine Swallowtail butterfly, which had nearly disappeared in San Francisco is making a comeback with the help of humans and of one man in particular. Sam Wong, dubbed the "butterfly whisperer," has almost single-handedly brought the beautiful butterfly back from the brink.

Scientists have plans for bringing the woolly mammoth back from extinction. They hope to be able to create an elephant-mammoth hybrid within the next two years. This could be the first of many "de-extinction" efforts. And is that a good idea? What do you think?

A new study of songbird dehydration and survival risk during heat waves in the desert Southwest suggest that some birds are at risk for lethal dehydration and die-off when water is scarce. The danger is expected to increase as the planet continues to heat up.

A newly discovered beetle hitchhikes by clamping its jaws around the waists of army ants and disguising itself as the ant's butt. Presumably, this also keeps the beetle from being eaten by the voracious ants.

Globalization has increased the number of species that get transported inadvertently or on purpose to places where they don't belong, thus greatly expanding the threat of invasive species.

A potential use of drones for birding places that are inaccessible or difficult to access by humans involves attaching audio recorders to them. The drones would then be directed to fly over an area, recording birdsong, thus allowing a census of that area.

Bison are returning to southwest Saskatchewan. The big animals, once almost driven to extinction, are at home on the prairies of North America, and now they will be a part of the Grasslands National Park there.

"The Last Word on Nothing" tells us about the most massive living organism in the world - the quaking aspen tree. 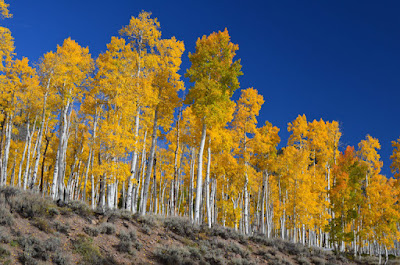 Although it looks like a forest, it is really only one tree.

And "The Prairie Ecologist" tells us about the life of the single (bee) mom - native bees that lead a solitary life.

Earth's worst mass extinction happened about 252 million years ago, ending the Permian Period. It was a cataclysmic event known as "the Great Dying" in which about 90% of species went extinct. But fossil evidence from Idaho indicates that life made a relatively rapid comeback on the planet after that event. Less than two million years later, merely the blink of an eye in geologic time, there was a thriving underwater ecosystem present once again.