February 13, 2017
A roundup of the week's news of birds and the environment (better late than never edition): 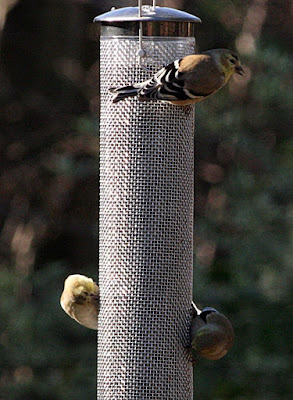 American Goldfinches in their winter dress visiting my backyard thistle seed (nyger) feeder. I'll be reporting goldfinches and all the other birds in my backyard for next weekend's Great Backyard Bird Count. I hope you'll consider participating and reporting the birds in your yard.

What had seemed like a reprieve for the rusty-patched bumblebee when President Obama gave it protection under the Endangered Species Act near the end of his presidency looks like it may be snatched away by the new administration in Washington that has put a 60-day pause on federal regulations not yet implemented. Sixty days from now may be too late for the bumblebee which is near extinction.

Birds like the White-eyed Vireo that depend upon a healthy understory of brush in forests are harmed by an overabundance of white-tailed deer in those forests. The deer devour the brush that the birds need for survival.

The mountain lion designated as P-22 continues to survive in Griffith Park in Los Angeles, an island of wilderness in the midst of the city. No one knows how he came to be there, but he shares his habitat with millions of human visitors throughout the year, coexisting amicably.

A crack in the Larsen C Ice Shelf in Antarctica has grown by 17 miles in the past two months, raising scientists' fears that it may soon break away from the continent.

Did you know that there was such a job as criminal forensic ornithologist? Well, there is and it turns out that this "dead bird detective" plays an important role in the investigation and prosecution of animal smugglers and the unlawful killing of birds.

Monarch butterflies had seemed to be mounting a bit of a comeback last year, but the news from their overwintering sites in Mexico and California put the kibosh on our rising hopes for the species. The numbers of butterflies in both areas were down again this winter, continuing a long decline since the 1990s that is estimated at 74% for the California population and 80-90% for the Mexican population. 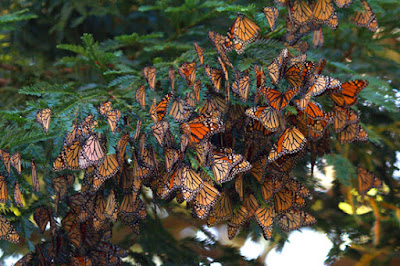 A cluster of wintering Monarchs on the California coast - Xerxes Society photo.

The path to saving the endangered snow leopard of the Himalayas is paved in...um...feces. By studying the leopard's feces, scientists are able to determine what it eats and, it is hoped, prove to local farmers that it isn't eating their livestock, thus removing a reason for them to try to kill the animals.

Forty-four years ago the most important conservation law in American history was passed by the Senate on a 92-0 vote and was signed into law by President Richard Nixon. Now, the Endangered Species Act itself is endangered by a much-changed Republican Party that will spend the next four years doing its best to kill it.

The Nature of Cities blog tells us about "Building for Birds," a tool that allows cities to plan for the creation and preserving of healthy habitat for birds in their environs.

A year ago, the East Coast's Delmarva fox squirrel was removed from the endangered species list after fifty years on the list. Continued monitoring by the Fish and Wildlife Service confirms that the recovered species is continuing to thrive.

The saiga antelope, an ancient species that once roamed the grasslands of the world with woolly mammoths and saber-toothed tigers, has declined in numbers in recent years due to illegal hunting, lost of habitat, and competition for food. It is currently listed as critically endangered on the International Union for Conservation of Nature's Red List and now it has been hit by a double whammy. A virus known as goat plague is racing through the population on the Mongolian steppes and leaving rotting carcasses in its wake.

Semipalmated Sandpipers are another shorebird species that has suffered decline in recent years. Scientists are studying it on its wintering grounds to see how it is sustaining itself there and in hopes of providing help for its continued survival.

The Yellow Rail is a small member of that family that is so seldom seen in its natural habitat, but we know that the population of the secretive bird has fallen and now it is threatened by a hydroelectric project in British Columbia. The project would destroy a wetland that is used as a nesting site for the bird. Conservationists are trying to save the wetland for the bird and other animals that depend on it.

A newly discovered species of frog in India makes a sound that mimics the call of the White-throated Kingfisher which inhabits the same area that it does.

The gas industry leaks enough to power three million homes each year. In November, the Bureau of Land Management published a rule that would make the industry capture and sell the wasted gas. Now, it seems that Congress will likely overturn that rule. After all, what harm could all that gas leaking into the environment and the atmosphere possibly do?
weekly roundup