February 04, 2017
A roundup of the week's news of birds and the environment: 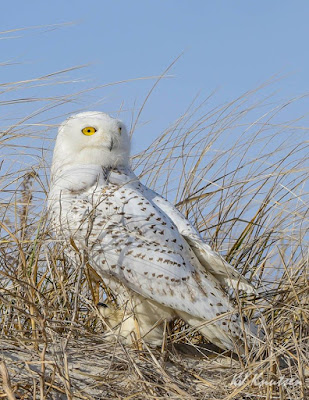 Snowy Owl photo by Kevin Knutsen of The Owl Pages

Snowy Owls are irrupting into the lower 48 states again this winter although apparently not in the numbers that we've had in recent years.

February 2, Groundhog Day, was also World Wetlands Day, a time to acknowledge how wetlands help to protect us from extreme weather events and natural disasters.

And "Ontario Nature" writes of the importance of vernal pools in the wetlands scheme of things and gives us four reasons why they should be protected.

Surprisingly, not everyone agrees agrees that wetlands and streams should be protected. On Thursday, the Republican Senate voted 54 to 45 to reverse the Stream Protection Rule put in place by the Obama Administration in an effort to protect the nation's waterways from debris generated by surface coal mining. The House had already approved the reversal, so the change will now go to the president.

Everything in Nature is connected. You can't remove or change one element without affecting the things that are linked to it. Thus, when invasive exotic plants overrun an area, they do so to the detriment of the native species that depended on the native plants that they replaced. Removing the invasives and replanting native plants gives a boost to pollinators, birds, and other species that depend upon them.

Rep. Jason Chaffetz of Utah introduced a bill that would allow the government to sell off 3.3 million acres - land totaling the size of Connecticut - of public lands. He claimed the land had "no purpose for taxpayers." It turned out those taxpayers did not agree; in fact, Americans quite like their public lands and want them protected. After a big public outcry, the bill was quietly withdrawn. But do not be deceived; the enemies of public lands are determined that their friends and corporate backers should be able to profit from them. They'll be back with a new bill.

The National Park Service has been underfunded for years and unable to keep up with the infrastructure repairs that need to be made, more evidence of the work of the enemies of public lands. The Pew Charitable Trusts are calling upon the new Congress and Administration to reverse that trend and to "Fix our national parks."

"All About Wildlife" lists some of the species that have been saved from extinction as a direct result of the enforcement of the Endangered Species Act. 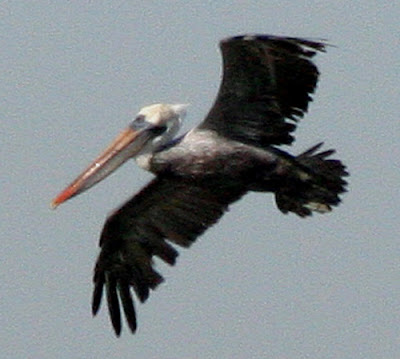 The Brown Pelican still flies over the Gulf of Mexico thanks to the ESA.

There hasn't been a lot of good news coming out of the Philippines lately, so this bit is particularly welcome. After three years of negotiations with stakeholders including Indigenous People communities, government agencies, universities, non-government and private sector organizations, the Cleopatra's Needle Critical Habitat has been established. The critical habitat covers more than 100,000 acres and aims to protect several threatened species.

Another animal brought back from the brink of extinction by the Endangered Species Act is the California Condor. Things are going well enough for the big bird that conservationists are now considering a plan for expanding its range by re-introducing it to northern California and Oregon.

Remember when I said a few paragraphs back that the enemies of public lands do not give up? Well, another bill has been introduced in Congress by Paul Gosar of Arizona that would encourage drilling for oil on national park lands. It's all a part of the ongoing campaign to weaken protections for the parks.

A new study traces the way that bird beaks have evolved. The study found that there was an initial burst of evolution around the time that the big dinosaurs died out, but since then evolution has occurred more slowly, with the exception of some island locations, such as Hawaii and the Galapagos. I found this particularly interesting since I am currently reading Charles Darwin's On the Origin of Species by means of Natural Selection. 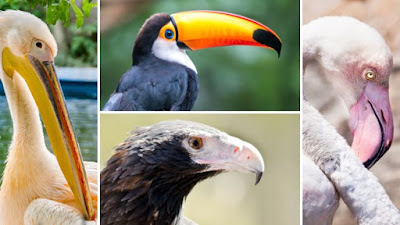 Just a few of the vast array of types of bird beaks that exist in the world.

Another reason for preserving wetlands: They are a key to fighting climate change. A new report from the Boreal Songbird Initiative calls for enhanced protection of wetlands in the boreal forest which help to sequester carbon and remove it from the atmosphere.

Public protests do have an effect. Italy has put on hold its plan to cull five percent of its wolf population after vigorous protests from environmentalists and animal lovers who had mobilized across the country.

Deforestation puts the regeneration of the cleared areas in jeopardy because the birds that lived there have to move on to other habitats, and forests are dependent upon birds to help spread their seeds and assist in the natural growth of the areas.

Leaving the Paris Agreement on climate change would isolate the United States and make it a loner on the world's political stage, but it is unclear if our new government understands or cares about the implications of such isolation.

The Amazon Reef, discovered just last year, is a 3700-square-mile system of corals, sponges, and rhodoliths located where the Amazon River meets the Atlantic Ocean. The oceanic conditions of the system are unique, not found in other places on Earth. The first ever underwater photographs of the area are now available.
weekly roundup