June 03, 2013
We have lived in our present home for twenty-five years and for all of those years, we have shared our half-acre yard with box turtles. Mainly, with one box turtle.

For most of those years, there was a very distinctive box turtle that lived in our yard. We were able to recognize her from year to year because of an unusual patch of damage on her shell. 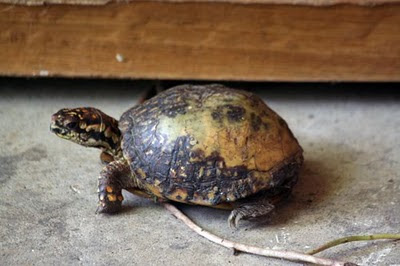 This was Sam Box in 2009. Hard to mistake her for any other box turtle.

We would generally start seeing Sam in May, once the weather warmed up sufficiently. I would encounter her at various times and places in the garden as I went about my activities there. But at some point during those years, Sam developed a cat food habit, and after that I saw her even more regularly. It happened like this.

We have two outdoor cats who live in our backyard. They are both neutered and quite docile cats, now quite aged at fifteen. 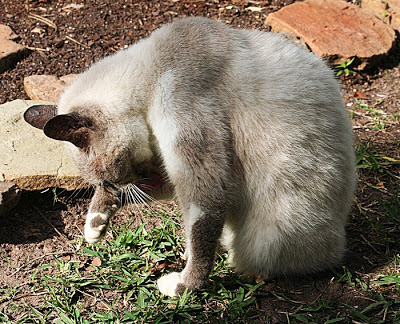 Charlie the cat at his bath.

Both cats coexist with the wildlife that inhabits the yard, including the turtle. I feed Charlie and Bubba (the cats) on the back porch, and Sam discovered this. Pretty soon, she was coming to the back porch regularly to cadge cat food. Sometimes I would find her waiting there for me when I went out to feed the cats in the morning.

This pattern continued uninterrupted for many years, but 2010 rolled around and no Sam Box showed up. I looked for her all summer long, but she never appeared. 2011 came and still no Sam. I reluctantly concluded that she must have turtled off to the great backyard in the sky. We had had an unusually cold season the winter before Sam disappeared. She must have been getting on in years and it may have been that she succumbed to the cold. I can only guess. I never found her.

Over the years, I had occasionally seen baby turtles around the yard and I assumed they were sons and daughters of Sam. But box turtles are territorial and so, I suppose, as they got big enough, they moved on to find territories of their own.

Then, one summer morning in 2011, something strange happened. I went out to feed the cats their breakfast and there, as if waiting for me, was a baby box turtle, small enough to fit in the palm of my hand. 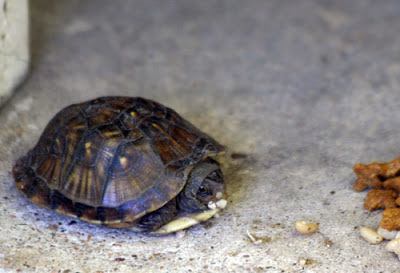 He looked fresh and new in his pristine shell, and it soon became obvious that someone had informed him about the cat food cafe that existed on my back porch. Soon, I was seeing him there regularly, nibbling on the dry cat food kibble.

He continued to make frequent appearances throughout the summer and autumn of 2011, but then last year, I didn't see him at all. He could have been there. It's a big yard and he's a small turtle, but I didn't encounter him.

But last week, a small box turtle, perhaps a bit bigger that the Sammy of 2011, showed up on the back porch, looking for cat food. Was it the same turtle? 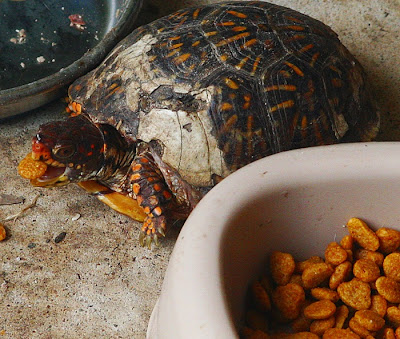 He certainly looked different than the 2011 Sammy. He had apparently had an encounter with a predator that had tried to gnaw its way through his shell. But, in spite of the damage, he appeared none the worse for wear. He was moving easily and had not lost his familial fondness for cat food!

So, just like Sam Box, we now have a box turtle tenant who is distinctively marked, one that I could pick out of a turtle line-up. I can only hope that this one will last as long as Sam did and he should, barring accidents. After all, box turtles can live up to 100 years. This one may well be here long after I am just ashes blowing in the wind.
box turtle Sam Box Sammy