A wonder of Nature

March 24, 2012
The migration of animals is one of the true wonders of Nature, and none of those migrations is more wondrous, bordering on the miraculous, than that of the Monarch butterfly. Each late summer and fall the colorful orange, black, and white butterflies from all across the North American continent head south toward their winter home in Mexico. For such a fragile creature to make such of journey seems incredible, but it happens to be true. And when winter is over the butterflies head north again.

An individual butterfly may not necessarily make the entire journey. The female butterflies lay their eggs on milkweed plants along the way and succeeding generations of the species then continue the trip until they reach their final destination. Some of them go all the way to Canada.

There has long been speculation about what percentage of the butterflies actually fly the entire distance and what percentage are born along the way. Now there has been some research done which has given answers to those questions.

Researchers at the University of Guleph in Canada sampled butterflies from 44 sites in Ontario and in the northern United States. By analyzing chemical markers called stable isotopes and examining wing wear, the researchers found that about 10 per cent reaching the northern breeding range in the spring come directly from Mexico. Thus, 90 per cent of the butterflies had been hatched somewhere along the way.


In my garden this week, I was visited on two separate days by at least two female Monarchs. Both of the ladies sought out the milkweed plants I had planted for the purpose and left a number of eggs on their leaves. 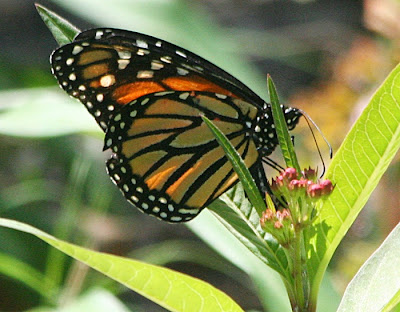 This Monarch visited on Thursday. Here she is laying an egg on a milkweed leaf. 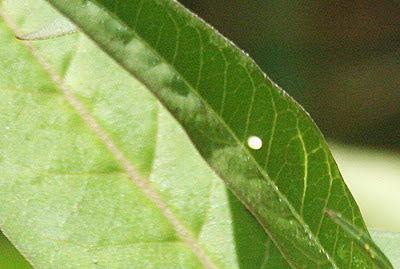 And here is one of the eggs she left. No bigger than a pinhead now, with any luck, it will release a tiny caterpillar in a few days and that caterpillar will munch the milkweed leaves and grow until it is ready to pupate and become another colorful butterfly. And then the amazing journey will continue.


The Monarch is in trouble for a number of reasons. One problem has been severe weather occurrences in recent years. Drought and excessively cold winters have taken their toll. There is also habitat degradation at their wintering site in Mexico due to trees being cut, changing the character of the forest. Mexicans revere these butterflies and they are making an effort to protect the area where they spend their winters, but, of course, they can't control the weather.


Another problem is development in North America which is destroying much of the milkweed which the butterflies depend on as a host plant for their caterpillars. This, at least, is something with which gardeners and home owners can help. All across the country, gardeners are being encouraged to plant milkweed in their gardens and they are responding as I have. It's a chance to throw out a lifeline for a creature that captures our imagination and makes us pause and consider this incredible wonder of Nature.
migration Monarch butterflies Nature