The Marriage Plot by Jeffrey Eugenides: A review 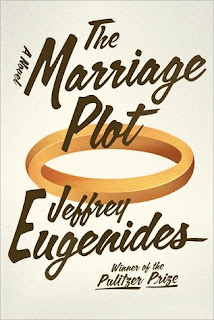 People who have read The Marriage Plot seem to fall into two camps: They love it or they find it pretentious and hate it.
In fact, when you get right down to it, the act of writing a novel, any novel, could be seen as pretentious. What makes you, the writer, think you have anything of importance to say to me, the reader, anyway? How presumptuous of you! However, that's not my camp. I admire the courage and the tenacity which it takes to put oneself out there and write a novel. Even a bad novel deserves some respect for the effort it took to produce it. But The Marriage Plot is not a bad novel. In fact, it is a very good novel and I am in the "love it" camp.

In his much-praised novel, Eugenides imagines three college students from his alma mater, Brown, in the early 1980s. They are: Madeleine, a passionate reader and English major, who is writing her senior thesis on the "marriage plot" which lies at the heart of so many great English novels such as those of Jane Austen and George Eliot; Leonard Bankhead, a brilliant and charismatic Darwinist who is trying to hide his mental illness, manic depression, and function normally in the overheated intellectual atmosphere of Brown; and Mitchell Grammaticus, who is seeking answers to questions about the meaning of life, the existence of God, and the true nature of love, but who is also obsessed with the idea that Madeleine is destined to be his life partner.

This is a book which, in large part, is about books and about reading. There are continual references to many of the best-known and best-loved books in English literature, as well as to many lesser known - at least to me - works in the field of semiotics, religious thought, and philosophy. From all the books mentioned, one could make up a reading list that would keep one busy reading for months if not years.

Perhaps I am way off base but I felt that Eugenides was drawing upon autobiographical experiences in writing this book. Many of the twists of the plot had a very personal feeling to them. I felt that he knew these characters and cared for them. I found that many of their experiences and emotions took me back to my own college days and that I could easily identify with the characters, also. That, in the end, was why I enjoyed the book so much.
books Jeffrey Eugenides reading reviews