The natural history of Earth

February 11, 2012
The natural history of our planet and how the continents came to have their shapes and to be placed just as they are on the face of Earth is a fascinating subject. Throughout the history of the planet, through the mechanism of plate tectonics, continents have come together to form super continents and then broken up and drifted apart again. We live in a time when the continents are separated by large bodies of water, but we now know that they are moving and that, in all likelihood, some day they will come together again.

As for how these movements will affect North America, geologists theorize that the north shore of South America will slide onto the Gulf Coast of the United States. The Gulf Coast shoreline will disappear and the Caribbean will be squeezed out of existence. Likewise, the mass of Eurasia will compress the Atlantic out of being and the Eurasian and American super-masses will slide toward a polar rendezvous. The future, in short, may look a lot like the last 600 million years of Earth's geological history, only in reverse.

However the continents finally align themselves though, it is likely that our beautiful planet will still look like a big blue marble floating in space. 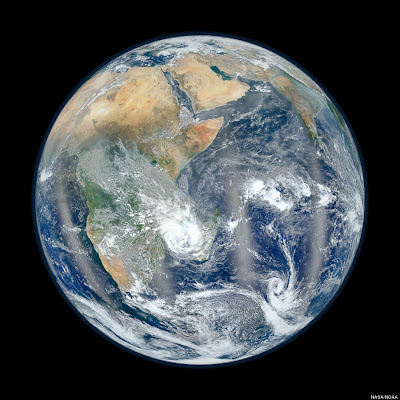 The eastern hemisphere of Earth as seen from space, showing Africa, parts of Europe and Asia and the Indian and Atlantic Oceans. (Photo credit: NASA/NOAA)
Earth geology