Contraceptives and religious freedom as the press sees them

February 16, 2012
The rule promulgated by the Obama administration regarding the coverage of contraceptives by insurance companies continues to make news. But most of the news that it makes has been about the shouting of the Catholic bishops over what they think is their right to impose their religious beliefs on everybody regardless of the individual's religious or non-religious beliefs. Much less attention has been paid to the rights of women to control their own bodies and their own sexuality and their right to use contraceptives should they choose to do so.

The Republicans and their overlords at Fox News have gone to great pains to obscure and fail to report the simple fact that the right to contraceptives is overwhelmingly popular in this country. Instead, they obsess about the poor downtrodden bishops being forced to provide contraceptives and pay for the coverage. Which, of course, they aren't. Under the rule, the coverage has to be offered and paid for by the insurance company. Meanwhile, the churches get to keep all their government goodies - their tax-free status and government grants - which ARE PAID FOR BY ALL OF US REGARDLESS OF OUR RELIGIOUS BELIEFS! That means you and me, sister. Yes, poor downtrodden bishops.

Even when contraception is discussed on cable news networks, it is almost never discussed as a women's health issue, which it clearly is. This chart from Media Matters for America shows how the issue has been covered recently by the three major news networks. It is clear that the main concerns have been political and religious. Only one network, MSNBC, has had any public health experts (one!)  discussing the issue. 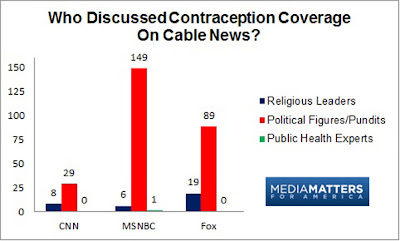 Today, Rep. Darrell Issa, (Wingnut, CA) convened his committee to discuss the issue, again as a religious freedom concern. Here is a picture of the "experts" who were called to testify about whether covering contraceptives is a violation of religious freedom:

Do you see anything odd about this panel of "experts"? They are all men!
Issa refused to allow a woman called by Democrats to testify. That's when Democratic women on the committee walked out. 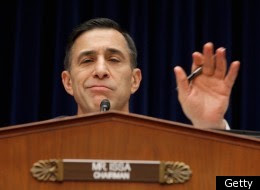 Darrell Issa says, "Don't worry your pretty little heads about this, women. The issue is much too complicated for you to understand."
It will be very interesting to see how the news networks handle this story!
Catholic bishops contraceptives women's issues