January 28, 2012
In one of my other blogs, Backyard Birder, I have reported on the arrival in California of the first wild gray wolf seen there since the 1920s. The wolf is a two-and-a-half year old male from a pack in Oregon. He is fitted with a GPS tracking collar and is designated as OR7. He crossed the state line from Oregon into California on December 28 and, since then, he has become an instant celebrity. 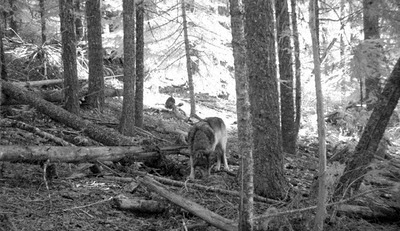 The wolf's image was captured by a wildlife camera that had been set up in the field.
The last gray wolf previously known to be in California was shot in 1924. In the early part of the twentieth century, the species was mostly extirpated throughout the West, and, indeed, throughout the country. It was listed as endangered under the newly passed Endangered Species Act in 1974. Then, in 1995-96, wildlife officials trapped 66 Canadian gray wolves and released them in Yellowstone National Park and Central Idaho. Despite some predictable setbacks, the wolves have flourished, and the area is now home to about 1700 of the critters.
Gray wolves have actually been remarkably successful in reclaiming their former habitats. In some states, they have succeeded to the point that they have been removed from that state's endangered species list. Indeed, in a few states, hunters are even allowed to legally hunt the animals. They are still protected and listed as endangered in California.
Californians have been very excited about the new addition to their state fauna. At least two Twitter accounts have been set up for him, where entries are made daily to report on his activities and his "thoughts." Some have petitioned state wildlife officials to provide a girlfriend for OR7. That is actually an important point. Wolves are social animals who depend upon a pack. A lone wolf has difficulty fending for himself and likely will have a shortened life span. If OR7 is to long survive, he will need a family.
It is interesting to note that if OR7 does manage to create a pack and survive in California, he and his family are likely to have a serious impact on the environment. In Yellowstone, where the wolves have now been in residence for some seventeen years, a new scientific report has recently been issued showing that elk and coyote populations are down. At the same time, aspen, willow, and cottonwood trees are increasing because they are not being overgrazed by elk. The number of beavers also is up, possibly because there are more of the trees that they need or because there are fewer coyotes to prey upon them. The regrowth of the trees also has positive implications for woodland birds and other small animals that live in such habitats. In short, the addition of the wolves to the environment has helped to balance the ecology.
And yet, there is a segment of the population, many of them in the West, that harbors an unreasoning hatred for wolves. No amount of scientific data about the positive impact of the wolf upon the environment will ever change their minds. Unfortunately, some of them express their hatred by the unlawful killing of wolves even in areas where they are protected.
The world is seldom a matter of black and white. Instead, it is often many shades of gray. But the issue of wolf vs. man seems one that is fairly clear-cut and well-defined. The wolf has much more to fear from man than man has to fear from the wolf, and the environment has much to gain by the return of the gray wolf.
gray wolf