September 05, 2011
On this Labor Day, Americans are feeling very insecure about jobs.  Furthermore, they don't understand why politicians are not as concerned about the unemployment rate as they are.  In poll after poll, they have expressed their feelings loudly and clearly.  They want their leaders to stop obsessing about the deficit and focus their energies on creating more jobs. 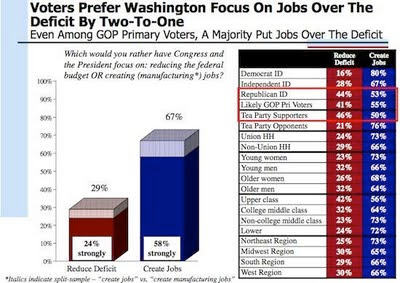 (Click on the graph to see a larger image.)


This is fairly typical of those polls.  Voters from all across the political spectrum and in every region of the country believe by a margin of more than two-to-one that politicians should be working to create more jobs, rather than talking about the deficit 24-7.
And it is not only average voters who think this way.  Knowledgeable economists, some of them with a Nobel Prize on their mantel, have warned for years that we are spending too much time dithering on the deficit.  The problem is jobs, lack thereof.  If we improve the economy and put people back to work, the deficit will begin to cure itself.

But the people in Washington don't have time for Nobel Prize-winning economists or for average citizens.  They only listen to each other and what they are hearing from each other is that the deficit must be fixed and that it can only be fixed by austerity, specifically, by cutting all the programs that poor people and middle-class people depend upon.  All the programs that benefit the rich must be kept intact at all costs!  (Some things are more important to these people than the deficit.)

In my world and the world of most Americans, jobs trump the deficit every time.  You would think that politicians would have received that message, especially on Labor Day.  I guess not.
deficit jobs politics