Did you ever just want to blow something up?

September 19, 2011
Anyone who has read very much of this blog will be aware that I am an admirer of Paul Krugman, the Nobel-Prize-winning economist, Princeton University professor, and New York Times op-ed writer.  And inveterate blogger.  I particularly love his blog where his humor has free rein, unlike in his Times column.

Krugman has spent years now, at least back to the early 2000s when I started reading him, pointing out the errors of political and economic policy.  For his trouble, he's often excoriated and almost never listened to by those he calls the Very Serious People, the people who hold the reins of power.  The fact that he has been right so often over the years seems to make the VSPs even more frenetic in their attempts to discredit him. One has to wonder what effect this has on him personally, what kind of a toll it takes, and whether it doesn't sometimes just leave him frustrated to the point of incoherence or just wanting to blow something up.

Well, he does have that Nobel Prize thingy to soothe his ego and, frankly, his ego seems to be in pretty good shape!  Yesterday, on his blog, he posted this image which an admirer had sent him. 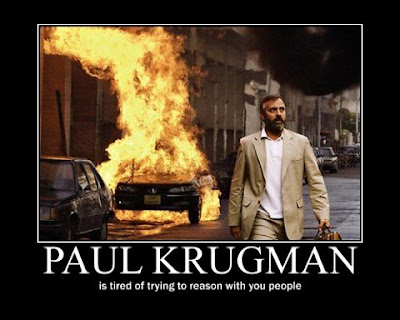 Moviegoers will recognize the iconic image of George Clooney  in "Syriana."  Now we know who to cast in the role of Paul Krugman when "The Paul Krugman Story" is made.  I love it!
Paul Krugman