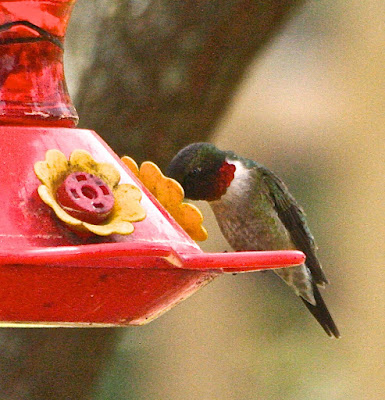 The Ruby-throated Hummingbirds are back. I saw the first ones at my feeders this week. They are mostly males so far. They are always the first to arrive. But I have seen one adult female.
*~*~*~*
It is well known that Sen. Joe Manchin of West Virginia is in the pocket of big coal. He has long been well-paid for his services to their dying industry.
*~*~*~*
President Biden has devoted a big chunk of time in his first year in office to undoing the energy and environmental policies of his predecessor.
*~*~*~*
In the American West, extreme wildfires are sometimes followed by heavy rainfall leading to the hazard of mudslides in the fire-denuded landscape. The heavy rain brings the added potential of flash floods contributing to even worse mudslides.
*~*~*~*
Climate change is making pollen season even worse than normal in parts of the country. Not only is it worse but it is beginning earlier than in the past.
*~*~*~*
Here's a great idea that we can only hope will spread: Put away those lawn mowers for the month of May! That will allow beneficial plants often identified as weeds to flower and flourish.
*~*~*~*
The invasive Burmese python has been a destructive plague on Florida's swamps, but it seems that Nature may have found a way to fight back. The native bobcats have developed an appetite for the python's eggs and that appetite may help to control the python population.
*~*~*~*
Wildlife trafficking can be controlled but only if the rich countries of the world do their part.
*~*~*~*
Russia's attacks on Ukraine have encouraged European countries to reduce the continent's reliance on Russian oil and natural gas.
*~*~*~*
One of the barriers to implementing renewable energy projects in this country is the campaign of disinformation that is often waged against them.
*~*~*~*
Mammals, we mammalian humans like to think, are the brainiacs of the animal kingdom. But it seems that was not always the way things were. During the Paleocene Epoch, mammals were more brawny than brainy.
*~*~*~*
Also, owls are known as nighttime hunters but that hasn't always and universally been true. In the past, the fossil record indicates that at least some of them were daytime hunters.
*~*~*~*
The European mink has been pushed to the brink of extinction by the invasive American mink but a population of the critters is thriving on Estonia's Hiiumaa Island.
*~*~*~*
A heatwave in the West is setting high-temperature records for March in several areas. The heat also helped to intensify a grassfire near Boulder, Colorado.
*~*~*~*
In the land of the world's first "green" political party, Tasmania, a movement is growing to restore damaged wilderness.
*~*~*~*
We often hear and read nothing but doom and gloom regarding the future prospects of the world's coral reefs, but a new book maintains that there is hope.
*~*~*~* 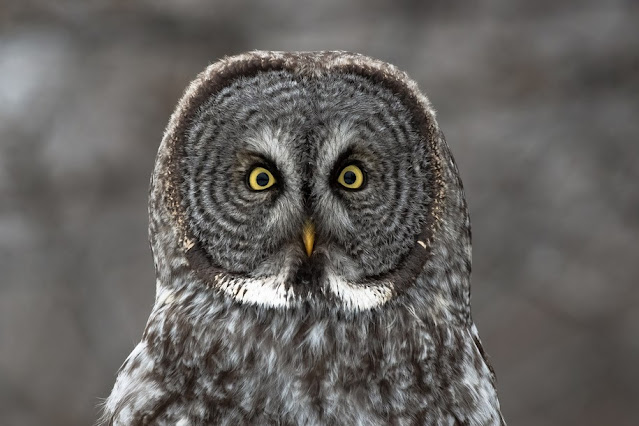 This wonderful face belongs to a Great Gray Owl. A birder reports on his observations of the bird in the wilds of Idaho.
*~*~*~*
As the ocean warms, many of the salmon are going deeper and some never return to their home rivers.
*~*~*~*
The roadkill rates are devastating for newts as they attempt to cross roads in their breeding season, but volunteers are trying to help see them safely to their destination.
*~*~*~*
In Australia where they are an invasive pest, cane toads are devouring their young due to chemical-induced cannibalism. This apparently does not occur in the toad's native home of Central and South America.
*~*~*~*
The National Park Service's oldest active ranger has just retired. She is Betty Reid Soskin, age 100, who became a ranger in 1984.
*~*~*~* 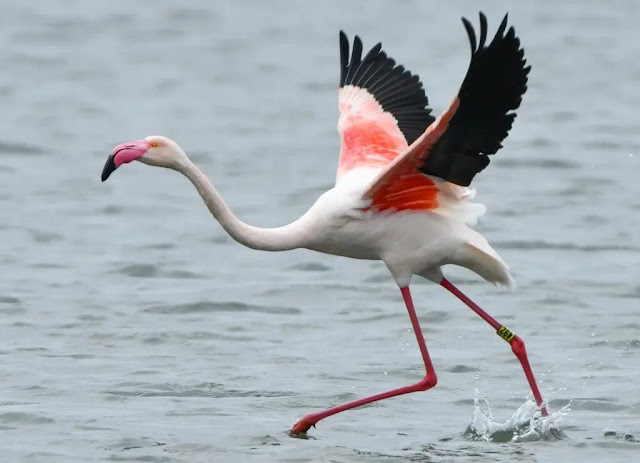 Long-time readers of the blog might remember this bird. He is No. 492, an African Flamingo that escaped from the Sedgwick County Zoo in Kansas in 2005. No. 492 made it all the way to the Texas coast where he was seen in 2019. And where he has just been seen by a fisherman once again. Seventeen years of freedom and still going strong. Long may he continue.
weekly roundup