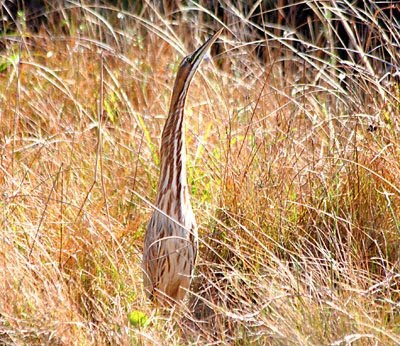 An American Bittern at Aransas National Wildlife Refuge hides in plain sight by pretending it's just another blade of grass. It will even sway in place to give the illusion of being moved by the wind.

The temperatures in southeast Texas have been surprisingly moderate for July this past week. We even had one night when the low temperature was 66 degrees - unheard of at this time of year. But elsewhere in the world, the temperatures have not been moderate at all. Europe is experiencing a record-breaking heat wave. Paris recorded its hottest temperature ever on Thursday at nearly 110 degrees Fahrenheit and the heat was no less intense in much of Europe.

In spite of the federal government's denial of the reality of climate change, many states and cities are forging ahead with plans to combat it. California is the leader in the effort. This week it was announced that they had struck a deal with four automakers to produce automobiles that are more fuel-efficient in coming years. By 2016, Ford, Honda, Volkswagen, and BMW of North America will produce vehicles that will get nearly 50 miles per gallon of gas.

Meanwhile, as Los Angeles makes plans to make itself more climate-resilient, it must deal with a problem that was generated over seventy years ago: groundwater polluted by World War II-era industries.

Florida, it seems, has become a hotbed of songbird snatching. Law enforcement has discovered a thriving underground business of trapping songbirds around Miami for the pet trade or for singing competitions. This is a direct violation of the Migratory Bird Treaty Act that protects all native birds.

Jordan has found a unique way to dispose of decommissioned military vehicles. They are sinking them to the seabed of the Red Sea in order to form the basis for an artificial reef. Plans are to have an underwater museum where people can view the activities of sea creatures on this reef. What a wonderful way to beat swords into ploughshares.

Even though the Kirtland's Warbler is sufficiently recovered to remove it from the endangered list, it will still require careful monitoring and the efforts of conservationists to ensure that its recovery continues. 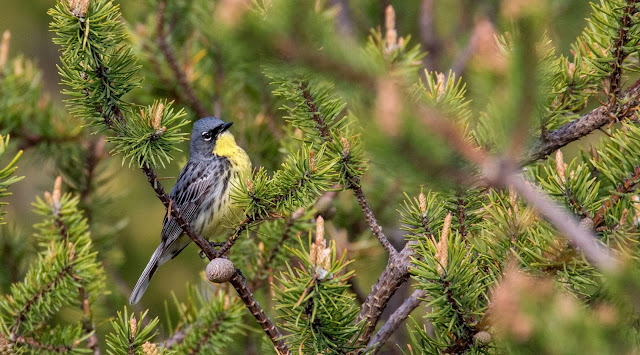 Kirtland's Warbler image from audubon.com.
This is the beauty that was almost lost to the world.

We are only beginning to understand the complex relations of the community of trees in a forest, how they communicate with and aid each other. Botanists in New Zealand have discovered "The stump that didn't die"; a kauri tree was cut down and only the stump remained, but that stump continued to live. The stump lives through a complex network of aid from surrounding trees.

There is evidence that birds, while still in their shells, can identify and respond to parental alarm calls and can pass that warning on to nearby eggs.

The International Union for Conservation of Nature (IUCN) has just declared a monkey called Miss Waldron's red colobus "possibly extinct". The species has not been officially documented to exist in more than four decades. Still, some conservationists are not ready to give up on it and will continue looking.

River Terns are disappearing from China. The birds nest on sandbars and their disappearance seems to be related to the disappearance of appropriate habitat. Efforts are being made to protect remaining colonies of the birds.

A rare butterfly that has largely disappeared from the East Coast has found an unlikely haven at the Fort Indiantown military base in Pennsylvania. During summer you can sign up for guided tours to see the Royal Frittilaries in a grassy field there.

What makes heat waves particularly dangerous is the fact that it doesn't cool down sufficiently at night. Nighttime temperatures are rising faster than daytime temperatures and that's difficult for our bodies to adjust to.

Species that might otherwise go undetected in streams can be identified by collecting environmental DNA.

A new study indicates that six major U.S. cities along the East Coast are emitting as much as two times the amount of methane into the air as has been estimated by the EPA.

And more evidence of the power of Nature: The Fresh Kills Landfill on Staten Island in New York was closed in 2001, at which time it contained more than 150 million tons of New York garbage. Since that time the area has been completely reclaimed by Nature.