Sapiens: A Brief History of Humankind by Yuval Noah Harari: A review 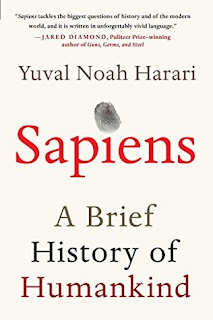 Israeli writer Yuval Noah Harari's book about the history of our species has been on the best-seller list for some 62 weeks and counting and for most of that time, it had been my intention to read it. I finally got around to it this week. Better late than never, or maybe better late, full stop. Now that the initial hubbub about the book has died down, perhaps it will be easier to approach it clear-eyed without prejudice.

The first thing to be said about the book is that Harari writes engagingly. He writes for a general audience and he manages to make millions of years of history and development of our species understandable. He has his theories about how we came to be the dominant species on the planet. Are they correct? And are we really the dominant species on the planet? That's something the reader has to decide for herself, but it's always best to keep an open mind and realize that there are other possibilities.

Most of Harari's book is devoted to Homo sapiens, even though the genus Homo has existed for about 2.4 million years and Homo sapiens has only existed for about 150,000 years. He gives short shrift to those 2.3+ million years that came before except to acknowledge that there were many different species within the genus during that period and that more are being discovered, especially in Southeast Asia, every year. Still, as a species filled with its own self-importance and woefully ignorant about others, it is only natural that a writer would spend over 90% of his "History of Humankind" on our one species.

Once Harari focuses his attention on Homo sapiens, the history begins to move at rocket speed. A species that began as hunter-gatherers goes through a number of "revolutions" that transforms us into the modern creatures that we are. The first was the agricultural revolution that changed us from hunter-gatherers to farmers. That happened only 11,000 years ago, so for most of our history we were hunter-gatherers and Harari makes the argument that our bodies are still in that phase, and our failure to acknowledge that is the source of some of our modern ailments. (Hello, paleo diet!)

The next "revolution" happened only 500 years ago - the scientific revolution. That, in turn, triggered the industrial revolution of about 250 years ago, which led to the information revolution of 50 years ago. And that has led to the biotechnological revolution which has only just begun and, in Harari's estimation, could be the end of sapiens, as we are replaced by bioengineered post-humans who can live forever. Thus has time sped up. What will be the next revolution? Has it already begun?

There's a lot to think about here. The author, for example, thinks that the agricultural revolution that started all this was a bad bargain for humankind. Farmers ended up working longer and harder hours than the hunter-gatherers ever did and their diet was worse and living conditions more crowded, bringing an increased risk of disease. If only we'd stuck to being hunter-gatherers we'd be a lot happier and healthier. But then I wouldn't be typing this on my Apple keyboard and there probably wouldn't have been a book published called Sapiens: A Brief History of Humankind. Or any book.

I enjoyed reading the book and I found a lot to agree with Harari about, but in the end, I was a bit put off by some of his over-the-top conclusions including his assertions that liberal humanism and various political philosophies are, in fact, religions. "All humanists worship humanity," for one example, does not strike me as an accurate assessment.

The book was published in 2015 and there was one sentence in it that brought me up short and reminded me, as if I needed a reminder, of just how much things have changed in only four years. In a discussion about racism, he wrote:


"White supremacy remained a mainstream ideology in American politics at least until the 1960s."

If only it had ended in the 1960s. Let us hope that we are not witnessing our final "revolution".