February 08, 2019
A roundup of the week's news of birds and the environment:

Early in the week, my birdfeeders looked something like this. They were covered in finches - here American Goldfinches and Pine Siskins, but also Purple Finches. By the end of the week, most of these visitors had moved on. We had temperatures in the 70s and 80s F for much of the week so maybe that convinced the birds that it was time to migrate north toward their breeding grounds.

The bulldozers have moved in at the National Butterfly Center in Mission, Texas, and construction of a wall there is expected to begin soon. The Center is still fighting to stop the destruction of the butterfly habitat and has requested an emergency restraining order. Construction of the wall threatens the region's growing ecotourism industry and most local people oppose it.

NASA scientists announced this week that it is now official that 2018 was the planet's fourth hottest in nearly 140 years of record-keeping and it represents a continuation of Earth's warming trend.

Successful strategies for saving endangered wildlife in a land that is torn by war would seem to be an almost impossible assignment, and yet there is such a success story: The snow leopard is making a comeback in Afghanistan, a country that has been in conflict for much of the last century. Such stories must give us hope. 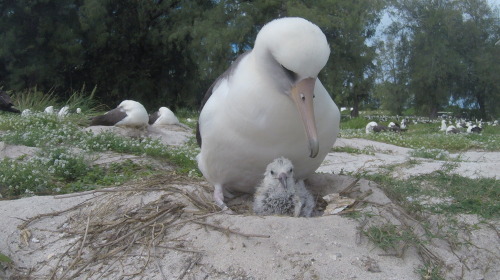 And, in other happy news, Wisdom has a new chick! The 68-year-old Laysan Albatross and her mate, Akeakamai, who appears in the picture above with the new baby, have nested at this same site on Midway Atoll since 2006.

Feeding birds, especially in winter, is one of the country's most popular wildlife-watching activities, but if you are going to put up a bird feeder, it is important to keep in mind bird safety when you plan the placement of the feeder.

Two chemical components of popular sunscreens, oxybenzone and octinoxate, have been shown to be damaging to coral reefs. Based on that information, some places are banning those sunscreens. The latest is Key West which will ban the sale of the sunscreens within the city limits. Earlier Hawaii became the first state to pass such a ban.

Australia has had more than its share of extreme weather this season - summer for them. Record heat waves, wildfires, and now floods. Record levels of rain have deluged northeastern Australia prompting flooding and emergency evacuations and forcing crocodiles and snakes out of their habitats and into populated areas.

The Sarus Crane is a non-migratory member of the crane family found in various parts of the Indian Subcontinent, southeast Asia, and Australia. Like many members of that family, it has been on the decline but a concerted effort at public education by governmental and conservation agencies has helped to involve farmers in helping to protect and preserve the species and has had a positive effect on the birds' population.

In winter, European Starlings gather in great flocks called murmurations that put on incredible acrobatic displays of flying. How do they do it? And why do they do it? Maybe just for fun!

A fossil of an ancient animal from 240 million years ago called a Pappochelys has been found to have had a cancerous leg bone, proving that the disease has been present on Earth at least since that time. The animal was a shell-less ancestor of turtles.

The Prairie Ecologist gives us more information about the migration of dragonflies.

Dead seabirds called Guillemots have been washing up on the Dutch coast by the thousands this winter. The cause of the birds' mass deaths is still unknown but a spill by a container ship is suspected.

The location of Earth's magnetic field is important to know because it aids in ensuring that navigational systems function properly. The thing is, that magnetic field fluctuates and scientists are engaged in tracking it. The magnetic North Pole wanders around the Arctic and that's the point that our compasses recognize as north, which is different from the actual geographic North Pole.

Environmental groups and scientists have scored at least a temporary victory in the battle to protect the Arctic National Wildlife Refuge from oil and gas explorations. The plan for seismic testing to search for oil and gas deposits has been called off for this season. 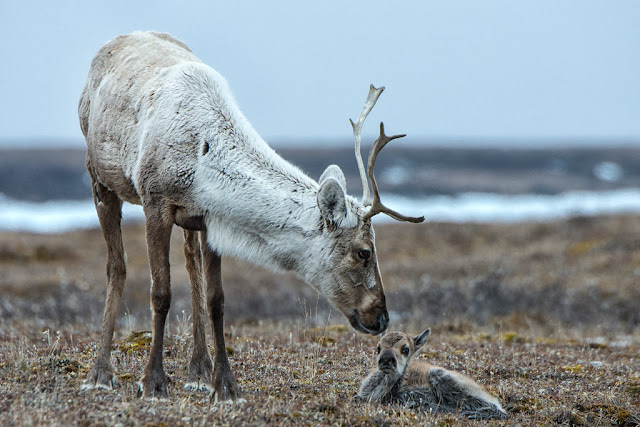 Image from The New York Times.
For now, this mother and calf from the Porcupine caribou herd of ANWR are safe from such explorations.

Three years ago a new volcanic island sprang up from the ocean surrounding Tonga. That land mass is now covered in a mysterious sticky mud and scientists are studying how the island is being colonized by vegetation and by birds.