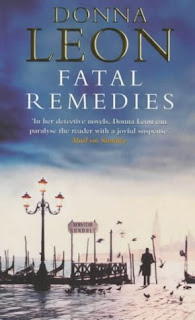 Paola Brunetti is a woman who feels injustice keenly. Particularly when that injustice is dealt to innocent children. She has recently become aware that travel agencies in her own city of Venice are selling sex tours to Southeast Asia. These sex tours offer children as their objects. Children are being raped for the pleasure of sick, rich men. Paola feels a compulsion to act.

The travel agencies are not technically breaking any Venetian or Italian law; their transgression is against morality. Paola decides to protest in a way that will get the attention of the agencies and, she hopes, the public. And so, in the early morning hours one day, she goes to the local travel agency with a very large rock which she hurls through the front window, setting off the burglar alarm. Then she sits down on a bench and waits to be arrested.

The two local gendarmes show up and question her about what happened, asking her if she can describe the vandal. She offers them a description and, at length, they realize she is describing herself. They take her into custody and take her to the police station where they discover that she is, in fact, the wife of Commissario Guido Brunetti. They call the Commissario and he comes to pick up Paola and manages to arrange things so that she is not charged.

Paola, however, is not content to let things lie. A few nights later, after the window she broke has been replaced, she goes to the agency again and tosses another rock through the window. This time she is charged and the local newspapers learn what has happened. A feeding frenzy ensues, much to the chagrin of Guido and Paola's father.

Meantime, Guido has been involved in the investigation of a robbery that may have Mafia connections and this leads to the death of the wife of a witness to the robbery - a death that is initially thought to be an accident but which Guido believes is murder.

Before this can be resolved, another death occurs. There's no doubt this time; it's murder by garrote. The victim is the owner of the travel agency that Paola vandalized and a note is left at the scene indicating a linkage with the vandalism. Could Paola have taken her protest to another level?

Moreover, when the police dig into the life and finances of the latest murder victim, they discover even more nastiness having to do with the shipment of out-of-date and adulterated medications for use in unsuspecting Third World countries. Was there no limit to the man's evil?

Poor Guido has his hands full, but he has his loyal helpers at the Questura, especially Signorina Elettra and Ispettore Vianello, on his team, so we can be assured that some form of justice will be achieved.

This is the eighth entry in Leon's Guido Brunetti series and it is one of my favorites. I particularly enjoyed the development of his wife Paola's character, as well as the mysterious (to Guido) workings of Signorina Elettra. This book was published in 1999 and, at this point, computers are still a complete mystery to Guido. He has no idea how to do an internet search or how email works! Fortunately for him, Signorina Elettra, with all of her contacts and her computer expertise, is on the job.