February 02, 2019
A roundup of the week's news of birds and the environment:

The American Bird Conservancy's Bird of the Week is the Great Horned Owl, an adaptable bird that can be found in a wide variety of habitats from tropical and boreal forests to deserts. There are estimated to be around 3.9 million of these hunters, sometimes called "winged tigers" or "tigers of the air," in the United States and Canada. They are quite active and vociferous at this time of year. There has been one serenading me from the live oaks in my front yard during the nights of this week. It's always a thrill to hear those deep, booming calls.

Climate scientists have been warning us for years that the heating up of the planet will create more extreme weather conditions. We've had a prime example of that this week with the polar vortex creating record cold in the Midwest, while on the flip side of the planet, in the southern hemisphere, record heat continues to be the story of the day. Australia is burning and wildfires are raging there while Chicago shivers.

In yet another unintended consequence of the recent government shutdown, when park employees were able to return to Point Reyes National Seashore in California, they found that Drakes Beach, which is a part of it, had been taken over by elephant seals many of which had given birth to their pups there. And for now at least those seals aren't going anywhere.

In recent years, starfish by the millions have been dying of a wasting disease along the Pacific Coast from Mexico to Alaska. This week a paper detailing research which names the ultimate culprit in creating favorable conditions for the disease was published in the journal Science Advances; unsurprisingly, that culprit is the warming of the oceans created by climate change.

But in the mountains of Mexico, the news is good this winter. The population of the overwintering Monarch butterflies there has increased by 144% over last year. It seems that in spite of the difficult year experienced by western Monarchs, the eastern branch of the family which migrates to Mexico for the winter had a very good year. 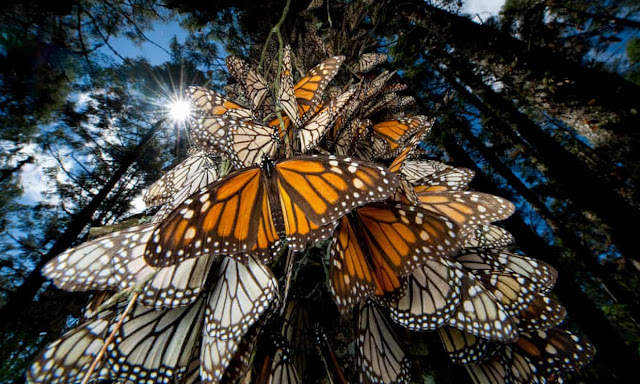 Image of wintering butterflies courtesy of The Guardian.

A short-term study of the Great Gray Owls of California following last year's wildfires has revealed evidence that the birds are doing quite well. They have proved very resilient in the face of the challenges posed by the fires. However, there will be long-term consequences of the fires that will potentially provide additional risks for the birds.

Beavers are thought of as residents of freshwater areas and so they are, but some of them do venture into intertidal zones. In the state of Washington, scientists are hoping that these creatures will help to restore the ecosystem along the coast.

This year marks the centennial of the Grand Canyon National Park. Many of the animals that make their homes there are facing new challenges as the park turns 100; they are having to move farther north to compensate for the warming climate. Now an advocacy group called the Wildlands Network is calling for the creation of a wildlife corridor linking the Grand Canyon with other public lands in the West to make it easier for these animals to move.

Another species facing the uncertainties of climate change and drought are Arizona's saguaros, those iconic and stately cacti that are indelibly imprinted on our imaginations of what a desert is. They have their champions among scientists as well as citizen scientists who are monitoring the growth of new plants.

Another desert species, the Joshua trees of Joshua Tree National Park, were vandalized and, in some cases, irreparably damaged by humans during the recent government shutdown. A former superintendent of the park says that it could take hundreds of years for the area to recover from the damage the visitors caused.

In the high Arctic, one of the most remote areas on Earth, genes associated with antibiotic-resistant superbugs have been discovered. They may have been carried there either by birds or by humans, but this is a clear indication of the rapid spread and global nature of the resistance problem.

We know that animals can be very adaptable. It is a thread on which we can hang our hopes for the future of life on the planet. Black bears, for example. When small drones were used to track wildlife in areas with black bears, at first the bears were afraid of them, but gradually, they became habituated to seeing the drones and ignored them. Is that a good thing or a bad thing? I'm not sure.

Native bees are extremely important to the ecosystems in which they live. The Maya know that and some are attempting to help the bees by reviving ancient arts of Mayan beekeeping.

The axolotl, sometimes called the Mexican walking fish, is actually a salamander and, like some others of its kind, it possesses a superpower: It can regrow limbs. Scientists are studying them to see if this superpower could somehow help humans to regenerate lost limbs.

We think of roads as being detrimental to ecosystems as they fragment habitats and make it more difficult and dangerous for animals to move from one area to another. But in some situations roads can actually have a positive effect. For example, in the tropics, road proximity may boost songbird nesting success.

The Sierra Club is feeling hopeful about climate change in 2019. Here's a list of ten reasons why.