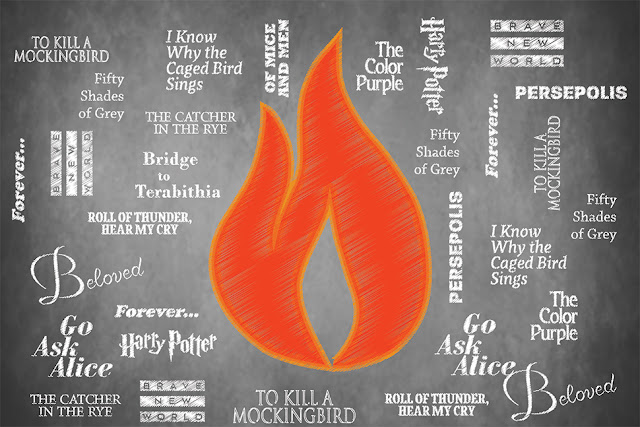 All of the books depicted in the above graphic have at one time or another been banned or removed from the bookshelves of school libraries or public libraries because of challenges from the public.

Each year the American Library Association's Office for Intellectual Freedom publishes statistics about censorship attempts in U.S. schools and libraries and designates a week in September as Banned Books Week, a time to celebrate the freedom to read. This year Banned Books Week runs from September 23 - 29 and the theme is "Banning Books Silences Stories." The week's activities are intended to call attention to the need for all of us who love and enjoy the freedom to read to speak out against what has become a rising tide of efforts to censor what can be read.

Usually the attempt to censor stems from the fact that a book simply expresses ideas that disagree with the would-be censor's view of the world. The ALA annually releases a list of the ten most challenged books from the previous year. This year they have produced a video introducing those books and the reasons that they were challenged. Here is that video.