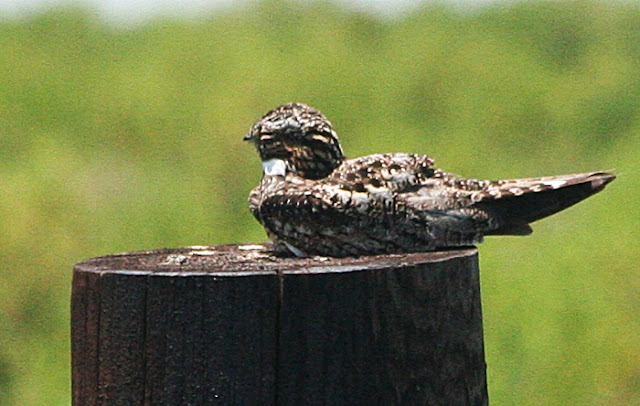 The Ruby-throated Hummingbirds finally showed up in my backyard around the middle of April, about two-and-a-half weeks later than usual, but I still have not seen or heard a Chimney Swift or a Common Nighthawk which normally arrive on the same wave with the hummers. I photographed this Common Nighthawk at Anahuac National Wildlife Refuge a couple of years ago in April.

The Kentucky Derby is today and several sleek and beautiful horses will be making the "run for the roses." The Haringtonhippus francisci probably could not begin to compete in such a race, but it was a survivor. This ancient horse lived in North America during the last Ice Age, nearly 16,000 years ago, and recently one of its skeletons has been found and recovered from a backyard in Utah. A paleontologist says that horse probably looked something like this: 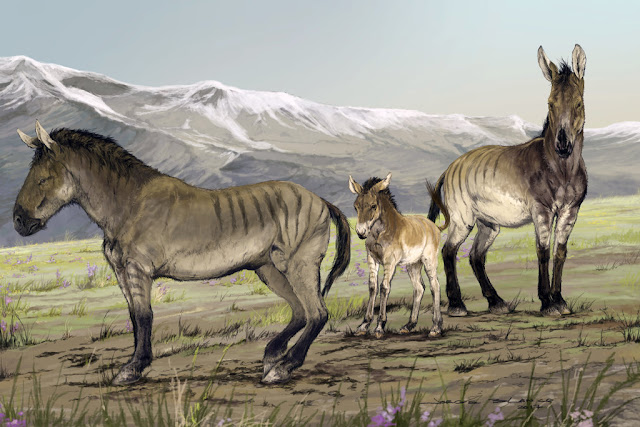 The jobs of the Siberian ice road truckers are being made more dangerous by the effects of climate change. With highways made of ice, including the frozen tops of lakes and rivers, warmer and earlier springs have added even more peril to the truckers' routes.

Flying dinosaurs still had dinosaur-like skulls but gradually the bird-like appearance that we are familiar with today evolved. A recent reconstruction of the skull of the Ichthyornis dispar, an early gull-like bird species of 66 to 100 million years ago, reveals that it still had the sharp teeth of a dinosaur.

It's not often that we read or hear good news concerning whales these days, but here is some: Humpback whales who live and breed in the southern oceans near Antarctica appear to be making a comeback, with females in recent years having a high pregnancy rate and giving birth to more calves.

U.S. Fish and Wildlife Services killed more than 23,000 beavers last year because they were considered nuisance animals. But even though these animals may sometimes prove inconvenient for humans, they have immense ecological value and there are ways to coexist with them.

In 1913, the water from snowmelt and a spring in Owens Lake on the east side of Sierra Nevada was diverted into the Los Angeles Aqueduct, leaving the lake to become a toxic dust bowl. In 2001, under court order, the Los Angeles Department of Water and Power began flooding the toxic areas in order to restore the habitat. The effort has been an astonishing environmental success and shorebirds now feed in areas where toxic dust covered the land only a few years ago.

Such projects as the Owens Lake restoration are important because many shorebirds are facing extinction as their habitats disappear.

A major management shake-up could be underway at the National Park Service, including the proposed reassignment of the veteran superintendent of Yellowstone National Park and six other senior executives, according to several individuals familiar with the plan. The transfers, which are not yet official, would come just days after the Interior Department’s inspector general found that officials failed to explain why they shuffled 35 top department employees last June. That round of reassignments, which forced those staffers to decide on short notice whether to move or step down, prompted sharp criticism. The suspicion is that the transfers are planned to make employees retire or resign rather than making long distance moves.

A recent excavation in the Philippines has given evidence that humans were living there hundreds of thousands of years earlier than previously believed. A butchered rhino along with human artifacts and tools has been found that dates to 700,000 years ago.

According to the “umbrella species” concept, preserving and managing habitat for a single high-profile species also benefits a whole suite of other species that share its habitat—but how well does this really work? Not all species that share the same general habitat necessarily have the same specific needs, and a new study from The Condor: Ornithological Applications finds that habitat management to benefit Greater-Sage Grouse in Wyoming can actually harm some of its songbird neighbors.

How do animals that hibernate for long periods handle bodily functions like elimination? In the case of the wood frogs of Alaska, it seems they handle it by not doing it. The frogs go for up to eight months without peeing. In fact the retention of urine is one of the things that keeps them alive. Even though the frogs may freeze, the recycled urea, the main waste in urine, helps to protect the animal's cells and tissues.

For decades America's air was getting cleaner as levels of a key smog ingredient steadily dropped. That changed about seven years ago when pollution reductions leveled off, a new study found. This means when tighter federal air quality standards go into effect later this year, many more cities may find themselves on the dirty air list.

The island of Guam is well known as a textbook case for the devastating effects of invasive species on island ecosystems with the extirpation of most of the forest dwelling birds due to brown tree snake predation. The loss of native birds has resulted in a loss of forest seed dispersers. Recent research has found an unlikely forest ally, feral pigs. The pigs have become perhaps the most important vector in spreading the seeds and regenerating the forest.

Researchers are trapping and tagging endangered Egyptian Vultures in order to learn more about their migratory routes and ranges as a means of finding better ways to protect them.

The fragile Everglades are under threat from climate change. Rising sea levels are imperiling the mangroves on which the existence of the wilderness as well as the coastal communities depend.
weekly roundup