January 20, 2018
A roundup of the week's news of birds and the environment: 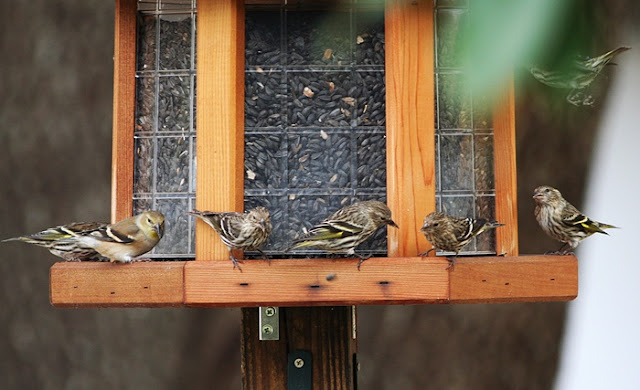 We don't get Pine Siskins (seen with one lone American Goldfinch) here every winter. Last winter I didn't see a single one. But this week we have had some unusually cold weather with temperatures in the teens on a couple of nights, and all of a sudden there they were! Pine Siskins at my bird feeders along with all the other finches, sparrows and warblers. In fact, before this week, I had not had very many birds at my feeders this winter, but with the super cold weather, they were looking for an easy meal where they wouldn't have to expend energy to obtain it. And I was happy to provide it.

On Thursday, NASA scientists ranked 2017 as the second-warmest year since reliable record-keeping began in 1880, trailing only 2016. The National Oceanic and Atmospheric Administration, which uses a different analytical method, had ranked it third, behind 2016 and 2015. The numbers were somewhat unexpected because last year had no El Niño, a shift in tropical Pacific weather patterns that is usually linked to record-setting heat and that contributed to record highs the previous two years. In fact, last year should have benefited from a weak version of the opposite phenomenon, La Niña, which is generally associated with lower atmospheric temperatures. Instead, it ranked with the hottest years on record.

In spite of the warming climate, in the northern hemisphere recently, the weather has been unusually cold. Even here in the South. In fact, temperatures were so cold Wednesday morning that the 64-degree Gulf of Mexico was literally steaming. Meteorologists call it “sea smoke” but it’s the exact same science as a boiling pot of water or your steamy breath on a cold day. Cold, dry air meets warm water; water evaporates into air until it can’t hold any more; water vapor condenses and steam forms.

The Christmas Bird Counts in Southern California this season will give clues as to how birds react after wildfires. The area covered by the Ventura count had at least half of its count section burned by wildfire, so it should be especially interesting.

In May 2015, over a period of three weeks, two-thirds of the world's endangered saiga antelopes, some 200,000 animals, suddenly dropped dead. Since then, scientists have been trying to figure out why. It turns out that the culprit was a bacterium that is normally harmless, but in warm and humid conditions, it turns deadly, and the places where these animals died were unusually warm and humid in May 2015. One more warning from Nature as the planet heats up.

More on the warming front: Alaska is rapidly heating up and some climate scientists suspect that the warmer temperatures there are contributing to the extremely cold temperatures experienced this winter in the lower 48 states. This is because the north/south temperature difference is one of the main drivers of the jet stream. The jet stream creates the high- and low-pressure systems that dictate our blue skies and storminess while also steering them. Bottom line: It is steering colder weather south. Of course, scientists being scientists, others disagree with this analysis.

In the area where the Glines Canyon Dam was removed from the Elwha River in Olympic National Park, birds are helping to restore the landscape by carrying and dropping seeds of native plants there.

More than three-quarters of the members of a federally chartered board advising the National Park Service have quit out of frustration that Interior Secretary Ryan Zinke had refused to meet with them or convene a single meeting in the past year. The resignation of 10 out of 12 National Park System Advisory Boardmembers leaves the federal government without a functioning body to designate national historic or natural landmarks. It also underscores the extent to which federal advisory bodies have become marginalized under the present administration. Sadly, this Interior Secretary may be doing irreparable damage to our system of public lands. At best, it will take years to repair the damage already done.

Nate Swick asks, "Are Snow Buntings North America's hardiest songbird?" A long-term study has shown that they are perfectly adapted to survive extreme cold. A question for the future may be, how fast can they adapt to warming temperatures?

Post-wildfire logging can be inimical to the needs of the endangered Northern Spotted Owl because it reduces the number of snags which they prefer.

In spite of their devastated landscape, continuing power outages, and destroyed buildings, birders in Puerto Rico banded together to do Christmas Bird Counts as usual. The final results of the counts may provide a clearer picture of the status of the birds there.

A new NASA study confirms that the spike of methane in the atmosphere correlates closely with increased fracking to extract petroleum products from the ground.

Other new studies are underway to track how climate change is affecting freshwater lakes and rivers.

"The Prairie Ecologist" wonders why bison historically behaved the way they did, wandering over the prairie. There's a fairly well-accepted theory. The PE offers an alternative.

Invasive non-native predators have been a bane for New Zealand and for many islands. A determined effort to eradicate them has borne fruit. Since a park in Wellington got rid of those predators and fenced out rats, stoats, and other such critters, rare indigenous birds have returned to the city. 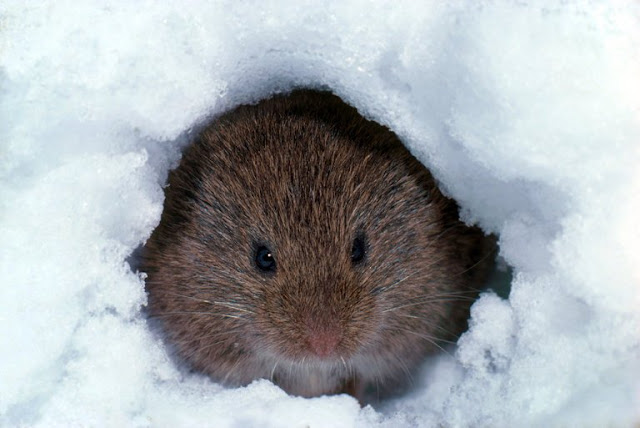 Count the meadow vole as one creature who appreciates a blanket of snow to insulate him from the cold.

Ever wonder why geese and other large birds often fly in a V-shaped formation in migration? Wonder no more!