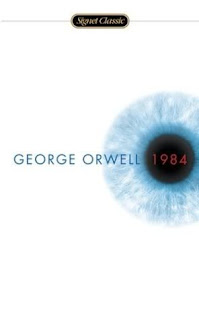 In 1984, the world has been carved up between three superstates: Oceania, Eurasia, and Eastasia. In Oceania, which includes the Americas and Great Britain, there is a province called Airstrip One and in that province (formerly Great Britain) is the city of London where the action of the novel takes place.

The three superstates are essentially identical in their societies and forms of government, and so, of course, since they have no differences, they are perpetually at war with the aim of controlling all the face of the Earth. Oceania's foe may be Eastasia this week and Eurasia next week, but the war itself never ends.

Oceania's political ideology is called Ingsoc in Newspeak, the English language as reinvented by the government. The government is overseen by an entity called Big Brother, whom no one ever sees, and the ruling class is the Inner Party which seeks to stamp out individualism and independent thinking with their Thought Police whose duty is to root out and punish "thoughtcrimes" (Newspeak).

Finally, at the bottom of the heap of society are the proles (proletariat), representing 85% of the population. They are the uneducated working class.

As we get to know Winston Smith, we learn that he is not an admirer of Big Brother and that he is seeking a way to rebel against the constraints of the totalitarian government. In the face of omnipresent surveillance by the government, this is almost impossible. Miraculously, Winston is able to meet and fall in love with Julia, a woman who works in the fiction department at the Minitrue, and their relationship supplies the impetus to try and resist Big Brother.

But their efforts are for naught. They are caught and taken to the Ministry of Love (Miniluv) where they are tortured, brainwashed, and eventually renounce each other. Considered "cured," they are released back into society. The last chilling words of the novel, referring to Winston, are:

Reading 1984 in 2018 America is a surreal experience. It often seems that one is reading a newspaper rather than a novel published in 1949. Big Brother's slogans seem eerily familiar.


When I read this book in my youth, I was somewhat bemused by Orwell's theme. Today, I find it frightening and depressing. He was prescient in so many things. It is not a fun read, but it is certainly one that we should take seriously in the present political climate.

“The best books... are those that tell you what you know already.”