December 01, 2017
A roundup of the week's news of birds and the environment: 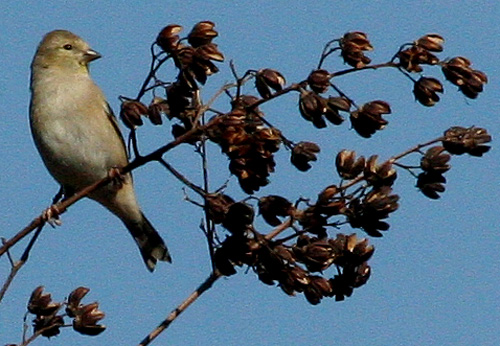 The American Goldfinches returned this week, right on time. This one is perching in a crape myrtle tree. They love the seeds of these trees and will visit them before they start visiting my feeders.

Congress is proposing to seriously weaken the primary law that protects migratory birds on the continent, the Migratory Bird Treaty Act. It is a sop to gas and oil companies that do not want to be held accountable for the bird deaths which they cause. The American Bird Conservancy has a petition which you can sign to oppose the action.

The current administration in Washington is planning to cut Bear Ears National Monument by 85 percent and the Grand Staircase Escalante by 50 percent. They plan to make the announcement next week. A coalition of conservation groups and tribes, who view Bears Ears as an important ancestral Pueblo site, are prepared to fight the changes in court.

The winter of 2017-18 is looking like it might be a big season for a major Snowy Owl irruption. There have already been an unusually large number of the owls reported in the Great Plains, Midwest and Northeast, some as far south as Oklahoma and Virginia.

Elk accept the grooming efforts of magpies. The birds do the mammals a service by picking ticks off them, thus establishing a symbiotic relationship; the birds get a meal and the elk are relieved of parasites. 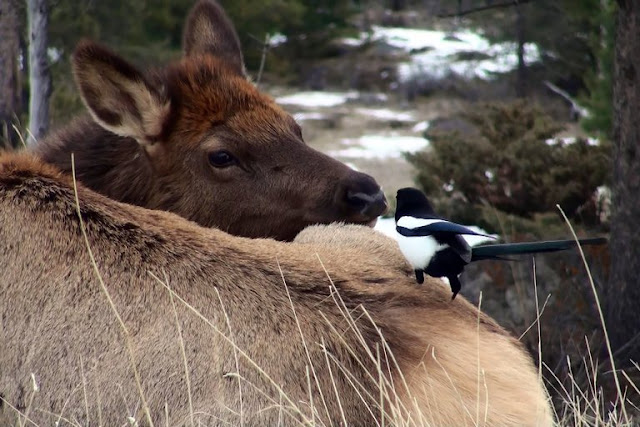 Mexico’s government has created the largest ocean reserve in North America around a Pacific archipelago regarded as its crown jewel. The measures will help ensure the conservation of marine creatures including whales, giant rays and turtles. The protection zone spans 57,000 sq miles (150,000 sq km) around the Revillagigedo islands, which lie 242 miles (390 km) south-west of the Baja California peninsula.
*~*~*~*
Recently burned areas actually represent some of the most biologically diverse habitats, but the U.S. cashes in on timber from these devastated areas and protections for such places are practically nonexistent. Conservationists are fighting to save from exploitation the habitats in the Sierra Nevadas that were burned in the 2013 Rim fire and that are now regenerating.
*~*~*~*
A new study of how hummingbirds drink utilized high-speed photography to take pictures of the birds' tongues as they drank nectar. The finding was that the tongue actually laps the liquid up rather than using a capillary action as was previously thought.
*~*~*~*
Plain little brown birds, sometimes referred to as LBJs (little brown jobs) by birders, often tend to go unnoticed and so may not get the protection that their flashier relatives get.
*~*~*~*
The Great Salt Lake in Utah is roughly the same area as 75 Manhattans and it feeds and houses millions of birds of hundreds of species. And it’s vanishing. A recent analysis published in Nature Geoscience last month found that human consumption — not seasonal fluctuations or climate change — is primarily to blame for the Great Salt Lake’s desiccation.

The endangered Snail Kites of Florida are evolving relatively rapidly by increasing the size of their beaks in order to feed on large invasive snails that infest the Everglades. There are hopes that this will engender a reversal in the bird's fortunes, that their population will increase, and that they will help to control the invasive species of snails. That's what you call a win-win outcome.

The Guam Kingfisher is extinct in the wild but a population of 150 of the birds is held in zoos and there are hopes of being able to reintroduce them to the wild if the invasive brown tree snake can be controlled and an appropriate habitat found.

Meanwhile, in Hawaii, long-term droughts are throttling the growth of forests there, making them shorter and less green and degrading the quality of the environment.

The last pure population of Golden-winged Warblers in Manitoba is beginning to show signs of hybridization.

Everything in Nature is connected and you can't change one element of it without affecting others. This has been shown once again in Hawaii where invasive frogs are reducing the insects available for native insect-eating birds and so may be giving a boost to invasive birds that have a more varied diet.

The endangered Spoon-billed Sandpiper is perched on the precipice of extinction, but that won't happen without a fight. The effort to save the unique little birds has been and continues to be nothing short of Herculean.