Wednesday in the garden: Bullfrogs

July 26, 2017
I was seated in my meditation spot by my goldfish pond earlier this week when I sensed movement at the edge of the pond. I looked up to see a slimy gray-brownish monster climbing out onto the rocks.


A bullfrog! I had no idea there was such a creature in my backyard.

This one looked as big across as my hand - I don't think I'm exaggerating. It covered most of the large rock where it rested. According to my field guide, they can grow 3.5 to 6 inches long and the largest one recorded was 8 inches long. They can weigh more than a pound and they are, of course, used as food by some people, although I've never eaten one. (My husband says they taste like chicken!)

I was shocked to see the bullfrog because I'm used to seeing the small leopard frogs or tree frogs around the pond; although, now that I think of it, I haven't seen any lately and the bullfrog may be the reason for bullfrogs eat other frogs. In fact, according to what I've just read, bullfrogs will eat just about anything they can get their wide mouths around. 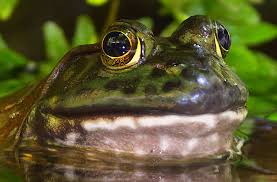 And it is a wide mouth.

They've even been recorded capturing and eating small birds and mice.

The American bullfrog is endemic throughout the eastern and central U.S. and may be found near any aquatic habitat. Such as a goldfish pond. It has also been introduced to other areas where it sometimes becomes a pest because of its voracious appetite which has occasionally led to the local extirpation of some other amphibians and reptiles. (I do hope that hasn't happened to my local frogs.)

So, how did this one come to be in my backyard? Spring Creek and its adjacent wetlands are less than a mile away, so I guess I shouldn't be surprised.