While working in my garden yesterday, a bird call that sounded something like a Wood Peewee caused me to look up. It was a bird much larger than a peewee - a Mississippi Kite, circling slowly over my yard. Mississippi Kites and Swallow-tailed Kites are members of the hawk family that are sometimes seen here in summer, although if they are silent, they may well pass unnoticed. I was just fortunate that this one decided to announce itself. Kites generally feed on insects, including large ones like dragonflies. Plenty of those around here.

Here's an update on that baby Red-tailed Hawk that I told you about a couple of weeks ago, the one that was captured as prey for Bald Eagle chicks but was unaccountably adopted by the Bald Eagle parents and became part of the family: He's still thriving! Wildlife biologists' fear that the eagles would at some point decide he was prey and eat him seem unfounded. They are continuing to keep an eye on him and say that he thinks he is an eagle, even though the eagles are four times bigger than him. Conservationists are waiting to see if he can make it as a hawk since he hasn't had hawk parents to show him what to do. If he appears to be unable to make the transition, the plan is to try to capture him and rehab him, training him to survive as a hawk.

More on the plan to build a wall through the Santa Ana National Wildlife Refuge on the Texas border with Mexico: The plan is being vigorously opposed by conservation organizations like the American Birding Association and American Bird Conservancy as well as residents in the area and other local conservation groups. The ABA blog has some suggestions about what birders can do to help.

National Moth Week, which strives to bring attention to the needs of these nighttime fliers, draws to a close tomorrow, July 30. Many moth species are in decline and one way to help them would be to reduce light pollution at night.

The Bikini Atoll in the Pacific is where the United States exploded 23 nuclear bombs in tests during the 1950s. It was declared a wasteland and its human inhabitants were relocated to other islands. But recently, a team of scientists from Stanford University have been surprised to learn that there is an abundance of marine life apparently thriving in the crater of the island. Just proving once again that Nature is resilient.

The "Dark Ecology Project" is developing methods for estimating the numbers of birds that are migrating in a particular area by using weather radar data.

Laura Erickson has a timely essay about the evil that is done to the environment by our partisan divide and stubborn refusal to look for common ground and find compromises that each side can live with.

DNA tests have proved that two butterflies that had been thought to be separate species are actually male and female of a single species.

As the people in charge of our federal government continue their attacks on the protections afforded public lands, timber industry advocates are pushing to remove protections for the giant sequoias in California's Giant Sequoia national monument. Yes, they want to cut down the 2,000-year-old trees.

Orangutans are able to make homes even in forests that have been degraded by logging and other human activities, proving the need to provide protections for those forests as well. 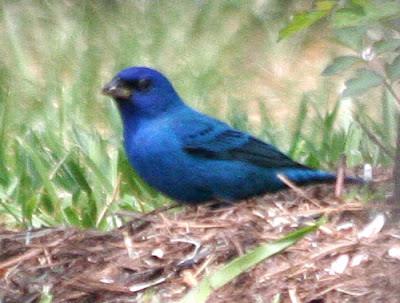 An Indigo Bunting feeding on the ground under one of my feeders in April.

The beautiful Indigo Bunting migrates through our area and can be found during summer in northern parts of the U.S. and into southern Canada. The eBird website has provided an animation of the bird's migration from Central American through North America.

The Breeding Bird Survey is now fifty years old and continues to document the changing ranges of birds throughout the country.

Scotland's famous bird, the Capercallie, is in decline. The bird's low level of breeding success appears to be related directly to the wetter summers that are a consequence of climate change.

The iNaturalist website has a app that can help with identification of critters based on their images.

In further proof that it is an ill wind that blows no good, the emerald ash borer that is devastating ash trees in the East has provided a smorgasbord for woodpeckers. Woodpeckers are feasting on borers this summer and doing really well.