October 22, 2016
A roundup of the week's news of birds and the environment: 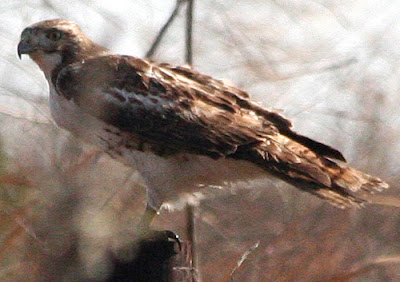 A Red-tailed Hawk rests on a post at Anahuac National Wildlife Refuge.

There is enough data accumulated to declare that 2016 will be the hottest year on record. This will be the third consecutive year to claim that title. 2014 was the hottest until displaced by 2015 and now that year has been displaced by 2016. But never fear! The New York Times has got your back. They've done investigative reporting and have now listed the nine cities where you can move to escape the effects of global warming.

Remember Pedals, the New Jersey black bear that walked on two legs? His front legs had apparently been partially amputated or else he was born with a congenital defect. I told you about him here in installment #220 of "This week in birds." Well, New Jersey recently had its first sanctioned bow and arrow bear hunt in decades and Pedals was killed by one of the hunters, sparking a considerable amount of outrage among his fans. The hunt itself sparked a good bit of outrage in New Jersey and those who opposed it hope that a new governor will see fit to put an end to it.

The current population of endangered California Condors are all descended from just 14 individuals; thus, genetic diversity is very low. But a new study provides evidence that, before the species' population crash in the 20th century, they were much more numerous and had much greater genetic diversity.

There seems to be little doubt among biologists that Earth is, in fact, in the midst of its sixth great extinction event. Often overlooked in the reporting of that event are the invertebrates and the role that they play in maintaining a healthy ecosystem.

Prince Charles of England has lent his voice and his influence to a number of environmental projects over the years and one of those has borne gratifying results. He backed a project to kill rats that were devastating nesting birds on two of the Isles of Scilly. The success of the venture is evidenced by the fact that this year the population on the islands of the rare Manx Shearwater rose to 73 nesting pairs, the highest in living memory and almost triple what it was just three years ago.

The problems that plastic waste cause our planet, especially in the seas, has been well-documented, but do you know whether you are part of the problem or part of the solution? Well, The New York Times has a quiz that you can take to find out. Warning: The result may make you feel bad about yourself.

As I've reported here before, Africa's vultures are being hunted and poisoned into extinction and this is a very big problem for the environment because these birds are a front line defense against the spread of disease. Conservation groups are working to try to save the birds. Some of their efforts are documented in a photography exhibit, Wildlife Photographer of the Year, that opened at the Natural History Museum in London this week.

Commercial fishing is destroying key nutrients of coral reefs. The most effective way to protect the reefs is to prevent overfishing.

Shorebirds frequently have funny looking bills that are adapted to take advantage of a particular food source. One of the weirdest is named for the shape of its bill, the Spoon-billed Sandpiper. It is listed as critically endangered worldwide but scientists have been in doubt as to its actual population size. Finally, researchers have been able to make an estimate of that population size based on available data.

Migratory restlessness in songbirds is difficult to assess, but with the use of radio telemetry, scientists are better able to measure it. A study of the European Blackbird revealed that, rather than gradually increasing restlessness, they switched abruptly to the nocturnal pattern of activity - most songbirds migrate at night - when they were ready to start migration.

Krill is a tiny pink crustacean that is the lifeblood of the Antarctic ecosystem. They are the main source of food for a number of Antarctic species, including some of the largest animals on Earth. Researchers are studying the tiny animals, seeking to learn more about them in order to better protect them and ensure the health of the ecosystem of which they are such an important part.

"Extinction Countdown" documents the slow-motion extinction of the Mangrove Finch of the Galapagos Islands as a result of a combination of problems that include the depredations of invasive rats and parasitic flies.

The Fulvous Whistling-Duck, a close relative of the Black-bellied Whistling-Duck which may be the most numerous year-round duck in our area, is expanding its range. It has been seen all over the lower 48 states and is becoming much more common along the Gulf Coast. Where it will finally end up is anybody's guess.

Long-distance travel is like a walk in the park for the Bar-tailed Godwit, a bird that can and does fly as much as 7,000 miles nonstop on migration.

A pioneering research project in Puerto Rico is testing how tropical forests in the Amazon, the Congo, and elsewhere will react to the rising temperatures created by global climate change. This will be the world's first attempt to try to find out how such forests will react to increased concentrations of carbon dioxide in the air, warmer temperatures, and changes in precipitation.