October 14, 2016
A roundup of the week's news of birds and the environment: 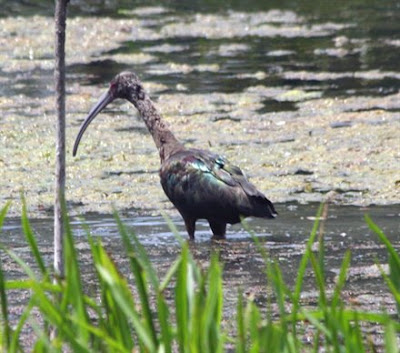 One of the many depressing facts about the presidential and vice-presidential debates this year has been that there has literally not been one single question about the biggest challenge facing our planet, the challenge that could ultimately make the place uninhabitable for human life. That, of course, is climate change. Meantime, in September, carbon dioxide passed the symbolic 400 parts per million, never to return below it in our lifetime, according to scientists. This is a reminder that day by day we are moving further from the climate humans have known and thrived in and closer to a more unstable future.

A new study provides even more evidence that the current harsh drought in California may be only a glimmer of what is to come. Warming temperatures and uncertain rainfall mean that if more isn't done to combat climate change, megadroughts lasting thirty-five years could blight western states.

This Florida Bald Eagle, nicknamed Matthew by his rescuers, somehow became trapped in this car's grille. Almost miraculously, they were able to extract him without major injury. He was taken to a wildlife sanctuary to recover from his ordeal and is said to be feisty and his wings are working. He will soon be returned to the wild.

More good news for the endangered California Condor. This year the first chick has hatched and fledged in the wild in California's Pinnacles National Park since the 19th century. Hope is kindled.

Nuthatches are surely some of the cutest little birds around. BirdWatchingDaily offers a photo gallery of North American species in that family. I'm happy to say that I have seen all of them in the wild!

Arachnids do not have ears, but a recent study has shown that jumping spiders are able to "hear" sound vibrations made by their predators and prey. Apparently, that vaunted special "spidey sense" does exist.

There has recently been a wave of tiny birds from Asia called Siberian Accentors appearing at various places in Europe, including the first known British sighting in the Shetland Islands. Birders, or twitchers as they are called there, are euphoric!

Florida Scrub-Jays often exist in very small and scattered populations but conservationists have found that these groups are very important to maintaining diversity and to the continued survival of the species.

According to NOAA records, last month was the ninth warmest September across the contiguous 48 continental United States. This is based on records that go back to the 19th century.

The Alaskan bumblebee has not been extensively studied, but scientists are currently attempting to rectify that. They believe that these bees may hold clues to the effects of climate change on bees everywhere.

The first fossilized voice box (syrinx) of a prehistoric bird has been discovered by a paleontologist in the Antarctic. The bird was a 66-million-year-old waterfowl called Vegavis iaai and its intact syrinx indicates to scientists that it probably honked or quacked much like modern waterfowl.

There is substantial evidence that one in eight species of seabirds and songbirds worldwide are now in danger of extinction. And here in North America, one in five of our land bird species need urgent action to stem population declines.

The voluntary Rangewide Plan for saving the Lesser Prairie Chicken was hailed by its proponents as ushering in a new era in private land conservation, but many conservationists feared that it was putting the bird on the fast track to extinction. They have submitted a petition to the USFWS to relist the bird as endangered.

A rare beetle from Florida was given protection under the Endangered Species Act last week, but, unfortunately, two other species, one from Arizona and one from Kentucky, went extinct while waiting to be listed.

On a more positive note, White-tailed Eagles, or Sea Eagles, became extinct in Scotland in the early 1900s, but they have made an extraordinary comeback recently. A new study claims that their numbers could double within the next ten years.