October 02, 2015
I wrote this post just a couple of weeks ago. Sadly, I could probably repeat it every few weeks and it would be relevant to the day's news.

The top line on the graph has had a substantial number added to it in the past couple of weeks, most recently with the mass murders in Oregon yesterday. And the unacknowledged, and seemingly unending, war goes on.


Perhaps we need to reexamine our definition of what

constitutes war. Deaths from gun-related violence in this

country from 1989 through the end of last year outnumber

all the U.S. military deaths from wars that this country

has been involved in since its founding. Does that not sound

country? Moreover, this is a war that is waged in large part

against unarmed women and children. 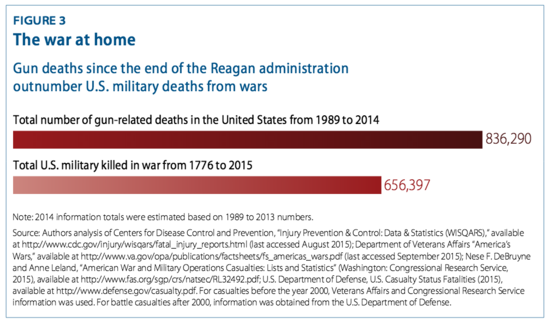