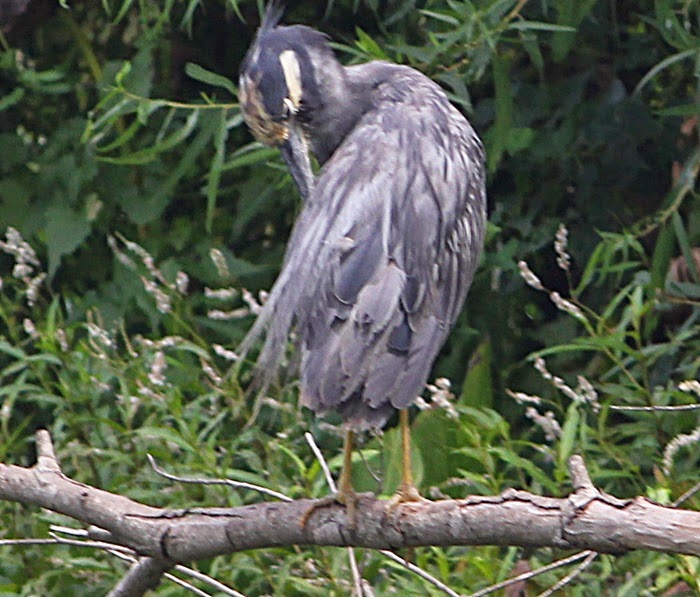 A Yellow-crowned Night Heron, seen here preening its feathers, is one of the common herons that you might see on a visit to a wetland area in Southeast Texas at this time of year.

The National Climate Assessment, a study prepared by a large scientific panel overseen by the government, was issued this week. It offered a dire picture of how global warming has already affected the United States, with coastlines being eaten away, long droughts occurring in dry regions, increased torrential rains flooding wetter areas, wildfires growing worse, heat waves becoming more frequent and severe, and forests dying under assault by heat-loving insects. That is a snapshot of the present. The picture will only get worse in coming years as long as we continue to deny that it is happening and are unable to summon the political courage to do something to ameliorate it.

It is still unclear just how many birds died as a result of the BP Deepwater Horizon explosion in the Gulf of Mexico, but, based on models using publicly available data, studies estimate that the total may be as high as 800,000. The oil spilled in that catastrophe is still affecting the environment of the Gulf.

How do birds survive in storms and harsh weather? The key, studies suggest, is found in two words: location and preparation.

Dams tend to degrade water quality, block the movement of nutrients and sediment, destroy fish and wildlife habitats, and damage coastal estuaries. All of which constitutes a very good argument for tearing them down when they no longer serve a useful function such as power generation.

The boreal forests of North America are home to some 300 species of birds. It is extremely important that these forests be protected from industrial development in order to preserve this essential habitat.

Inexperienced fledgling birds suffer high mortality from a number of different causes. They are particularly vulnerable to environmental challenges of which they have had no experience.

Researchers are studying whether climate change could adversely affect the relationship between bees and the plants they pollinate. As if the poor bees did not already have enough trouble.

Did you ever wonder how woodpeckers are able to bang away at hard wood surfaces without scrambling their brains? Well, it seems they have built-in shock absorbers behind those wicked beaks.

Using eBird data, scientists have determined that small songbirds may take different routes in their spring and fall migrations, based on changing weather patterns. These birds are no birdbrains!

Wood warblers are the rock stars of spring migration for many - make that most - birders. The brightly colored visitors, most of them very active, always on the move, and frequently found high up in the branches of trees, are a challenge to see and identify among the leaves. They are the prime cause of many birders' sore necks in the spring. There's even a name for it - "warbler neck."

I had the unique experience yesterday afternoon of being attacked by bluebirds. Yes, you read that right. These gentlest and mildest-mannered of birds were suddenly out for my blood!

It happened like this. I had gone into my backyard to do some chores in the garden. I immediately became aware that the Eastern Bluebirds were agitated and I walked toward their nest, fearing there might be a predator there. But it soon became apparent that the bluebirds thought I might be the predator. They were swooping at my head, only missing me by a few inches, and uttering distress calls. Then the penny dropped - their babies were leaving the nest.

The four little nestlings that the pair had cared for so assiduously over the last couple of weeks were ready to try their wings and their devoted parents were frantic that they might fly into danger as soon as they left the safety of their box. As soon as I understood what was happening, not wanting to add to the parents' stress, I decided that my garden chores could wait and I retreated and left the scene.

As far as I know, all the little ones made it safely into the world. A world that is considerably bluer and more beautiful today.
weekly roundup