May 08, 2014
Anahuac National Wildlife Refuge on the Texas coast has long been one of my favorite day trips for seeing birds. At any time of the year, one can depend on a great variety of species being present there, so it was with optimism for a good day of birding that we headed down to the refuge yesterday morning.

It had been many months since we had been there. We've had a family tradition over several years of traveling there for New Year's Day, but we missed that ritual this year and, in fact, this was our first trip there in 2014. Somehow, I had forgotten just how far it is. It is a good hour-and-a-half drive from our house. On bad days, it is closer to two hours.

We arrived at mid-morning and immediately noted some changes. The refuge was severely damaged by Hurricane Ike in 2008 and most of the human-built structures were destroyed, including the old visitor center. The storm surge washed over the refuge depositing salt water in its fresh water marshes and killing plants and animals alike. Since then, the refuge has made a slow recovery. Nature, with an assist from the U.S. Fish and Wildlife Service and an army of volunteers, has repaired it. Gazing at the refuge on this May day almost six years later, one would never guess at the mayhem wrought by that storm.

The newest human-made addition to the refuge's recovery is a new visitor center which features an observation deck from which to view the surrounding area. We made use of that deck as we were exiting the refuge and it gave me my biggest surprise of the day.

But that came several hours later. We started our visit by checking out the pavilion which was built a few years ago to replace the old visitor center. This has become a favorite spot for swallows to nest and they were swooping all around us on this day.

Barn Swallows have dominated the nesting here in the past, but, on this day, it was clear that the Cliff Swallows have discovered what a good thing this place is for nesting. 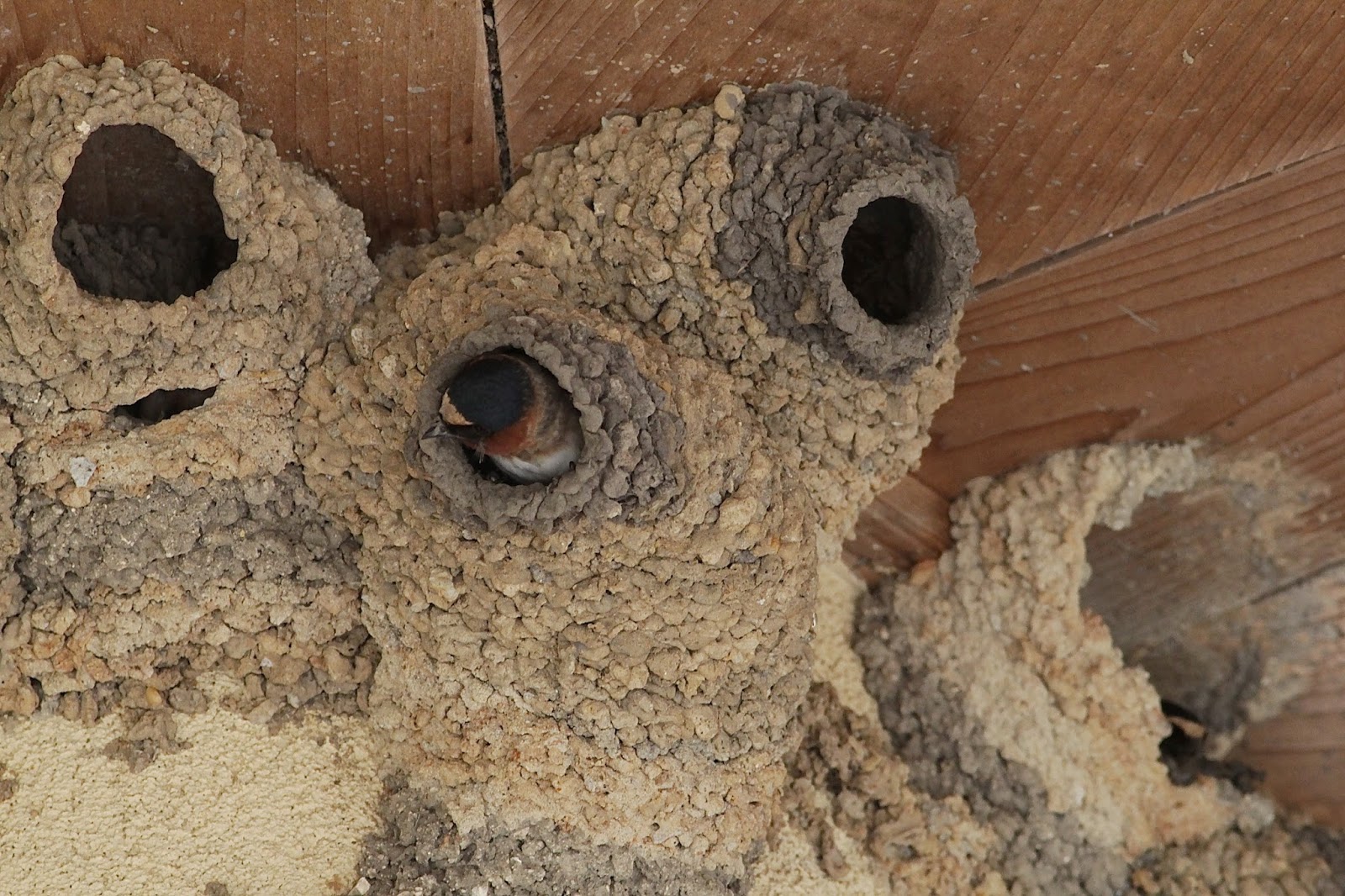 Many Cliff Swallow condominiums were scattered around the ceiling of the pavilion. Several of them were still under construction. 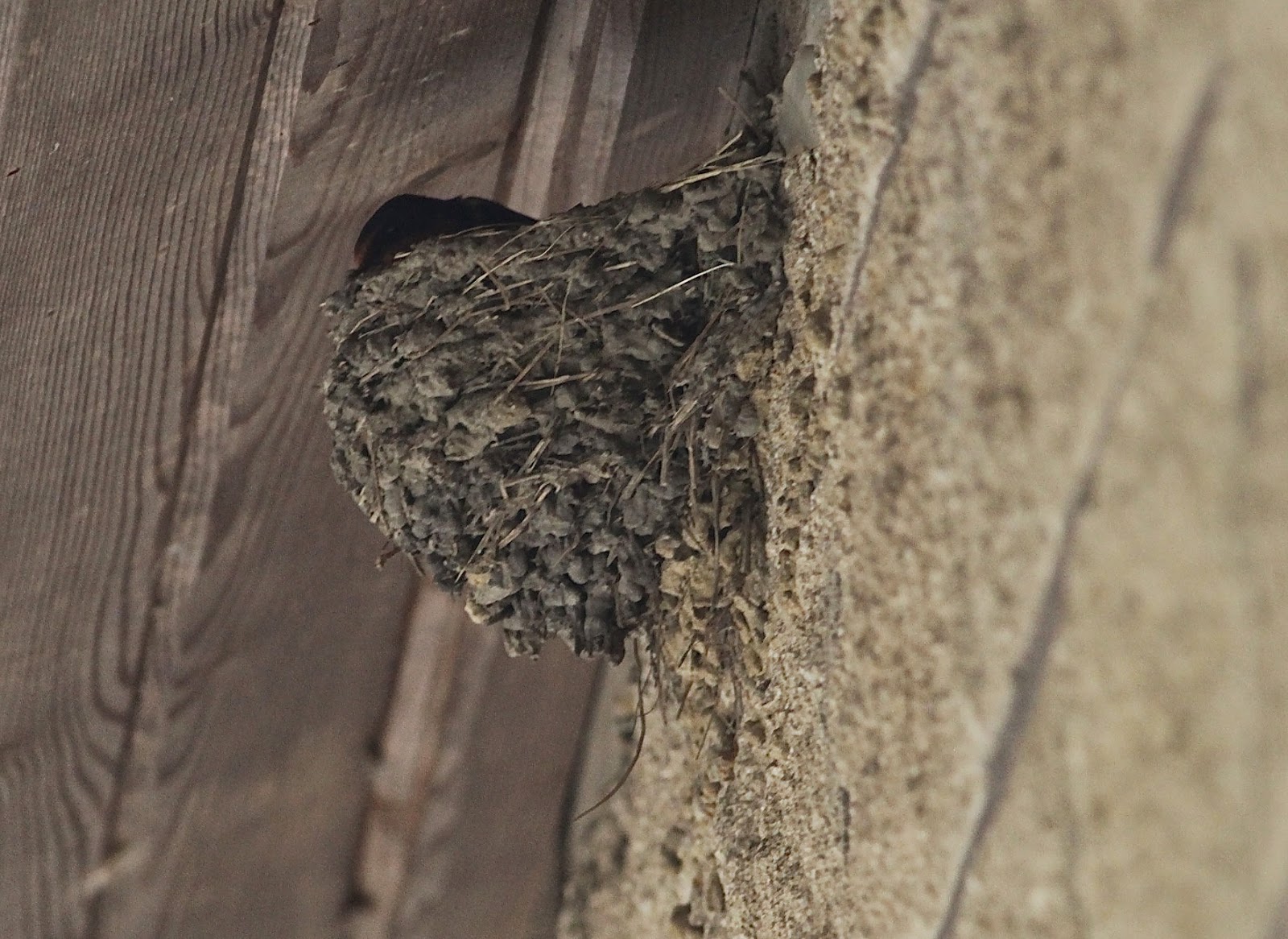 There were only a few of the cup-shaped Barn Swallow nests to be found.

Turning from the pavilion, I looked across the road to a stand of trees and noted a bird-shaped lump on a couple of limbs. 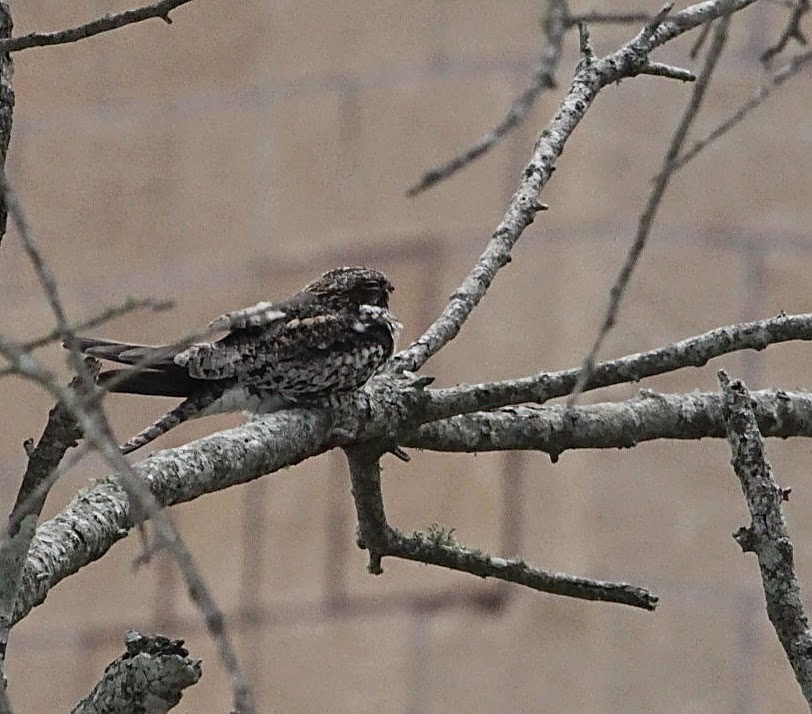 There were Common Nighthawks pretending they were a part of a dead limb - and doing a darned good job of it!

On our last visit to refuge, the small pond at its entrance was dry, victim of the drought, but on this visit, it was full of water once again. 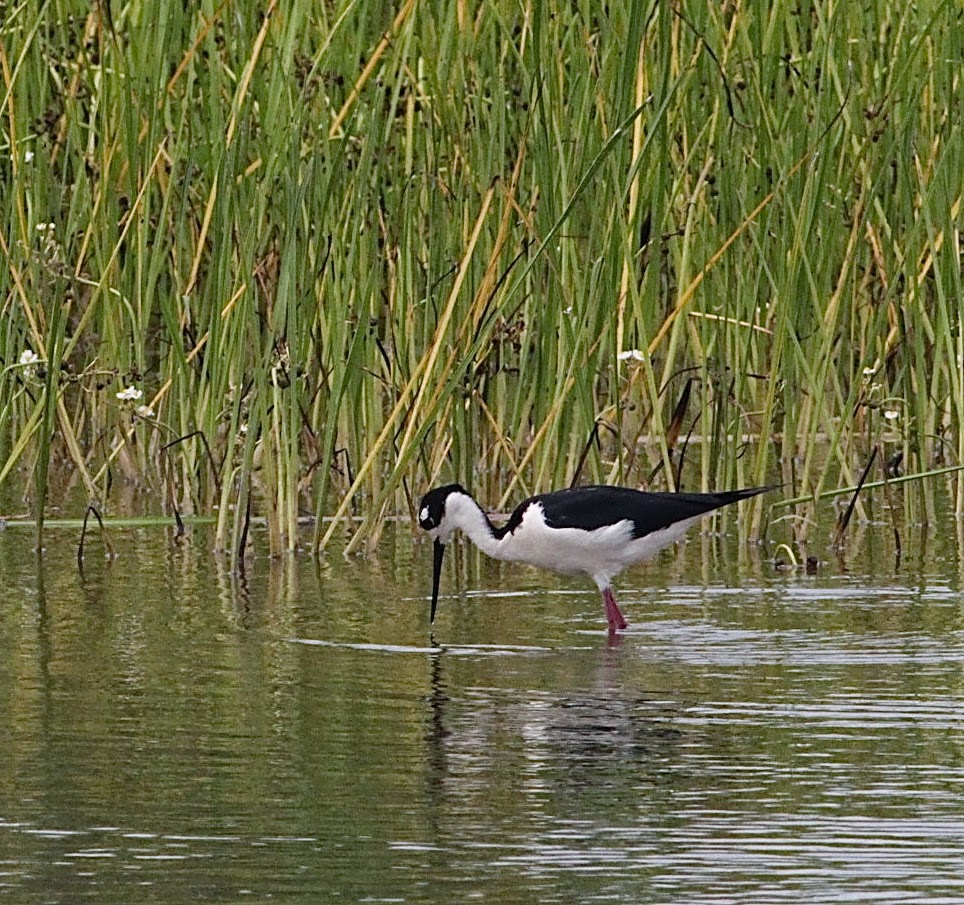 A lone Black-necked Stilt was gleaning its lunch from the water. 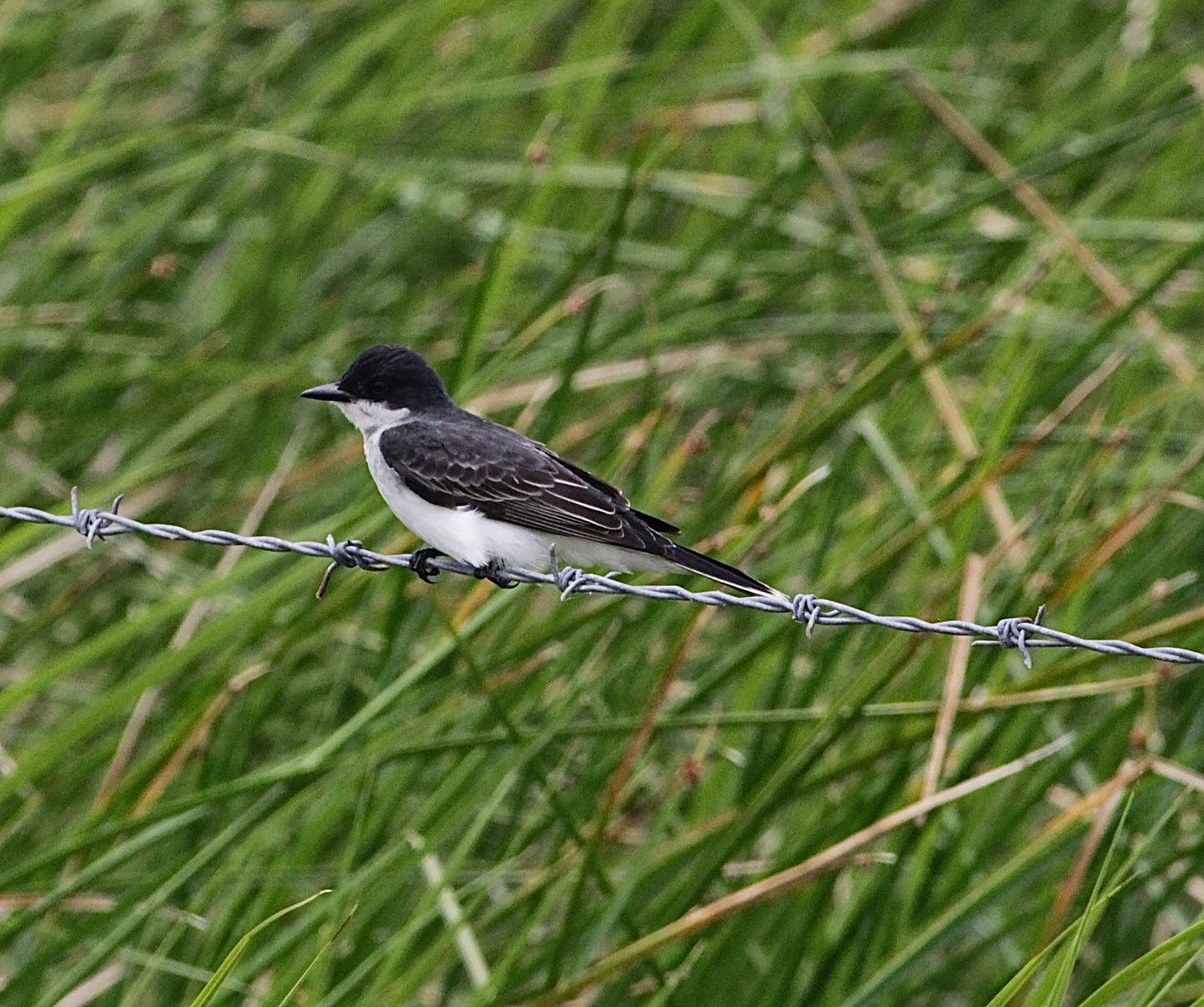 Visiting Anahuac in spring is likely to bring you in contact with quite a few of these attractive birds - Eastern Kingbirds. Today was no exception. They seemed to be everywhere. 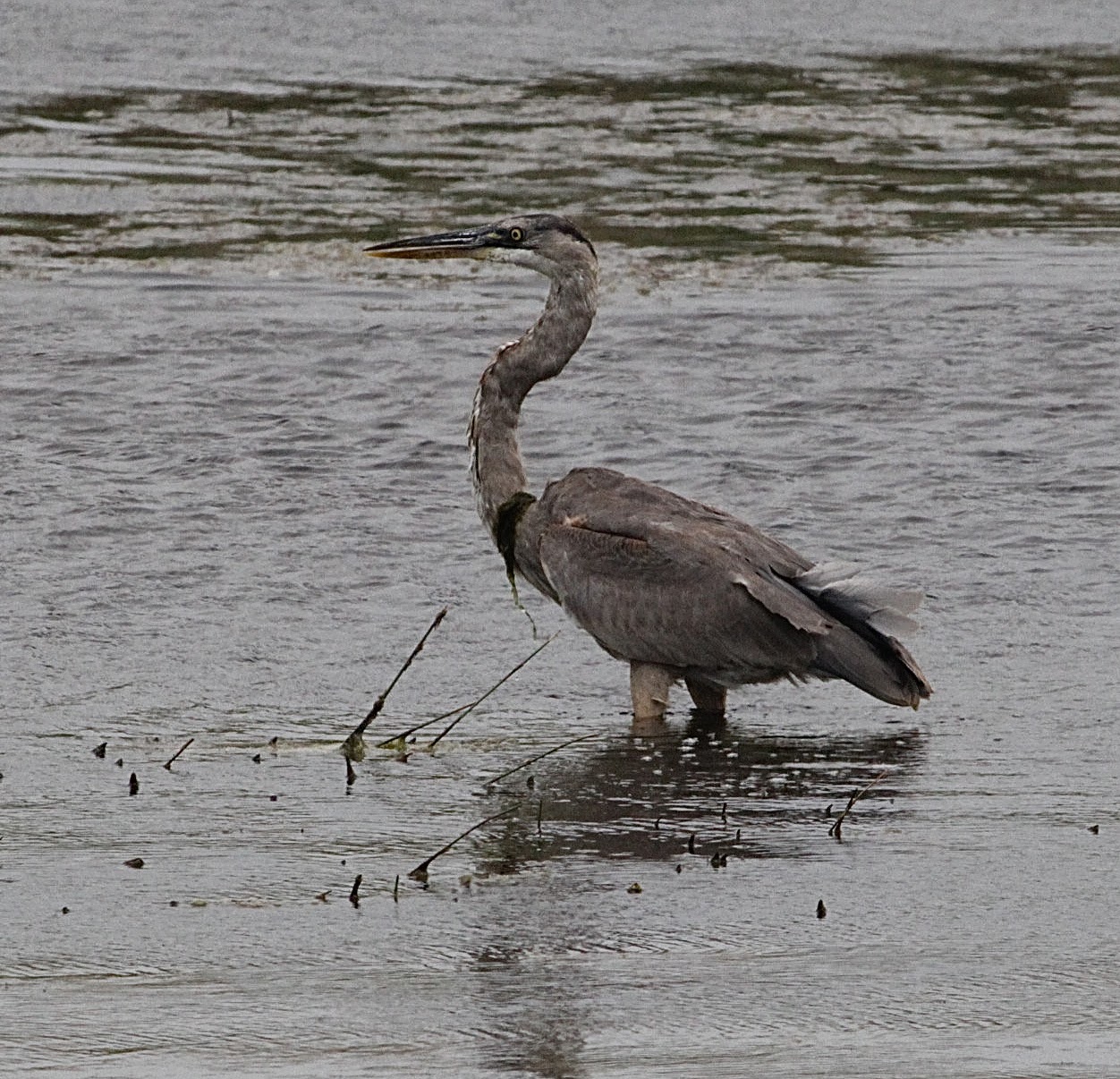 And, of course, it is a rare visit that doesn't find at least one Great Blue Heron.

One bird that I hoped to see on this visit was the Roseate Spoonbill and I sort of got my wish. I saw a good-sized flock of the big, pink birds - I counted twelve - but they were such a long distance away that my camera lens was not up to the task. Nevertheless, I had to try. 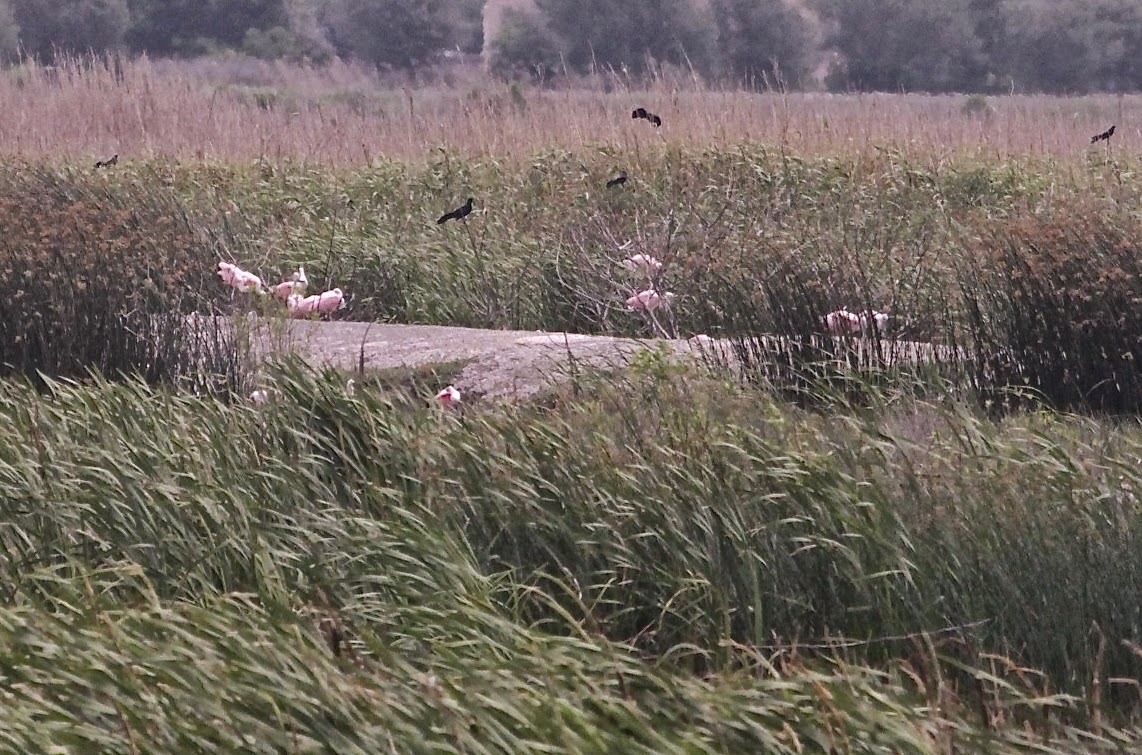 You can perhaps tell that those pink blobs are birds. You'll probably just have to take my word that they are spoonbills. The black images clinging to the reeds are either Great-tailed Grackles or Boat-tailed Grackles, both of which were present this day. 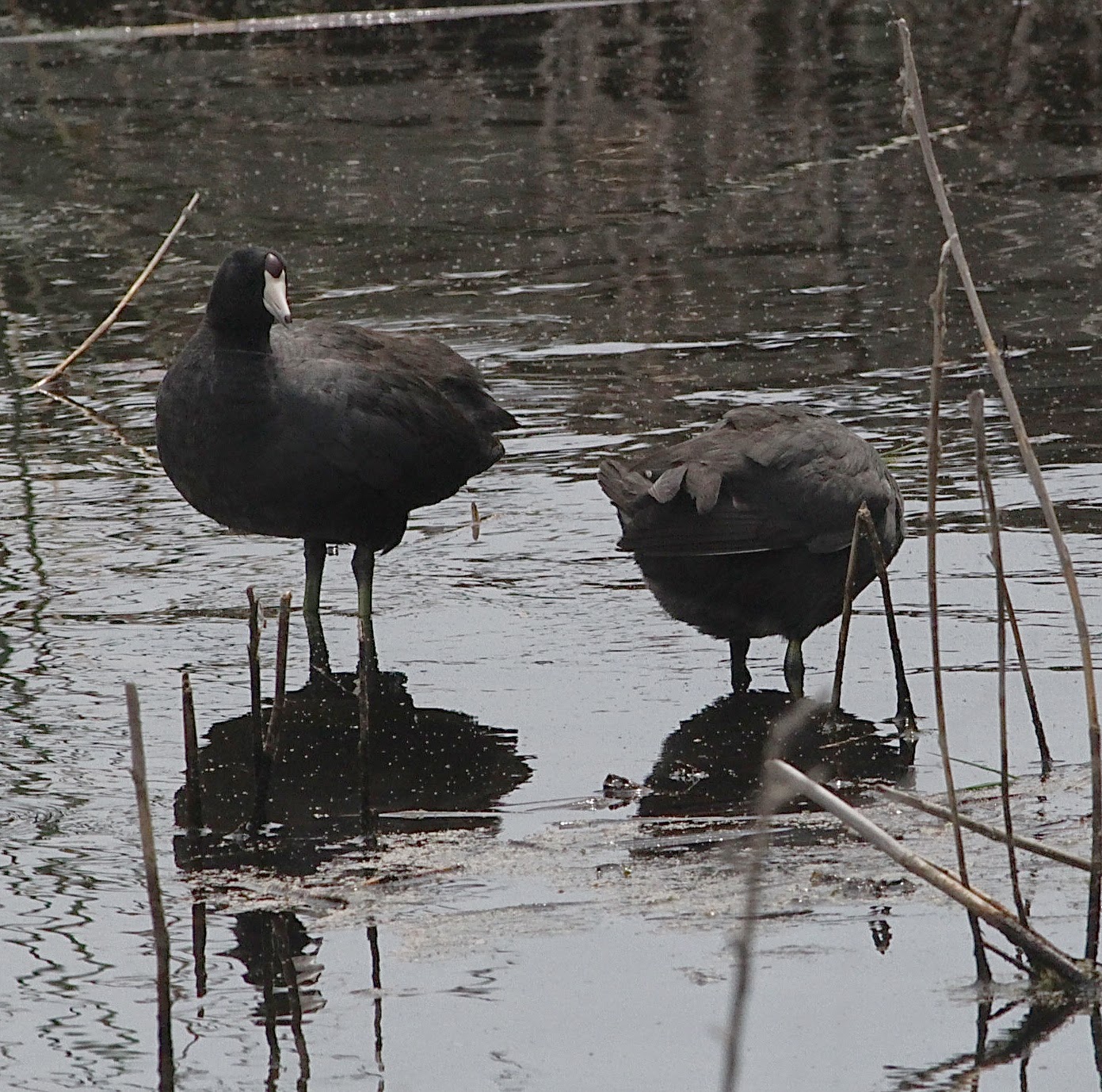 As always, American Coots were fairly numerous, but I only saw two of their cousins, the Common Gallinule. And no Purple Gallinules. I guess they haven't arrived yet. All around the area where we saw these coots, the air was filled with the trills of Marsh Wrens. I tried to get a picture of one, but he remained too well hidden among the reeds and rushes.

Many wildflowers were in bloom, brightening the scene everywhere. 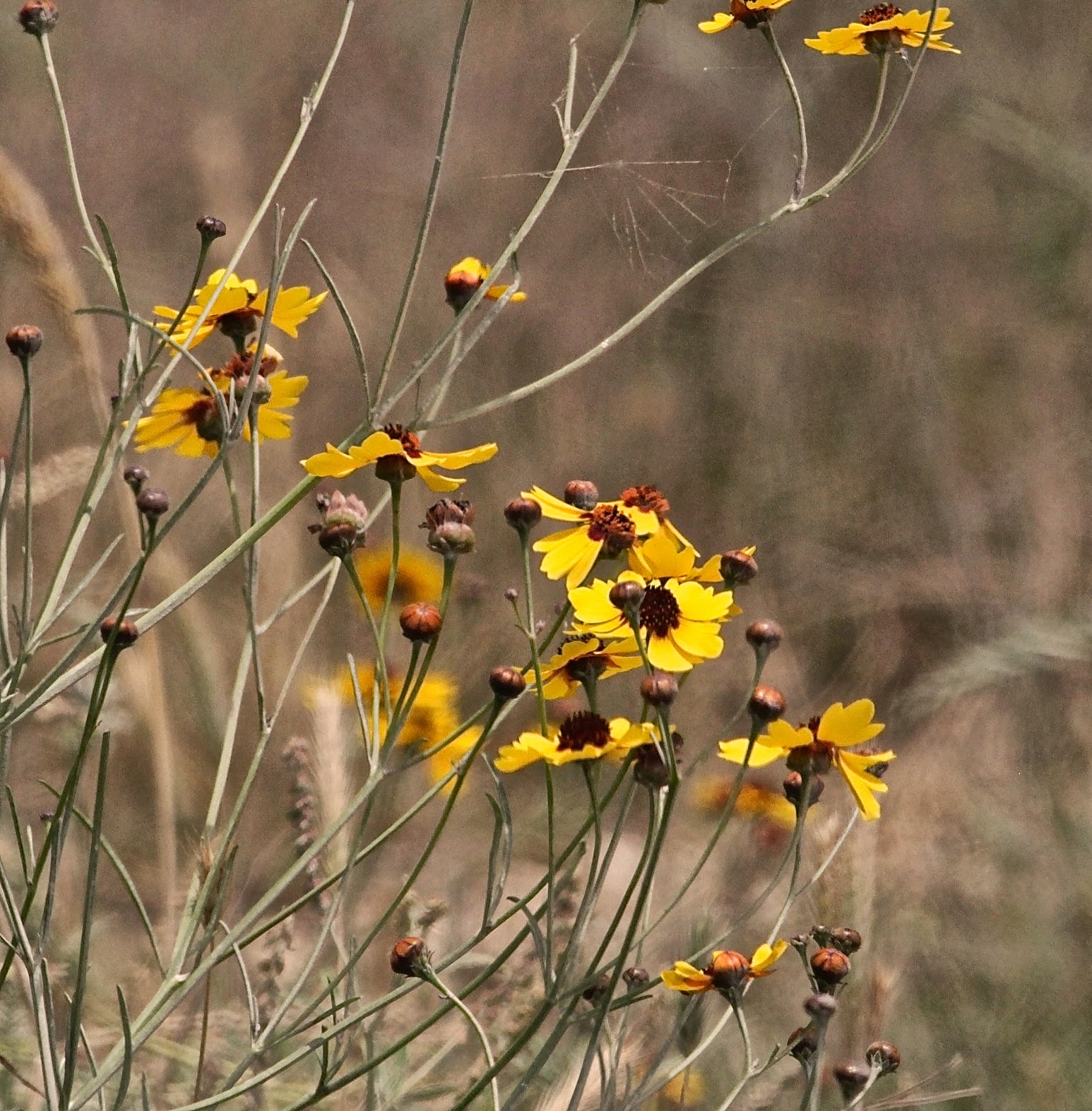 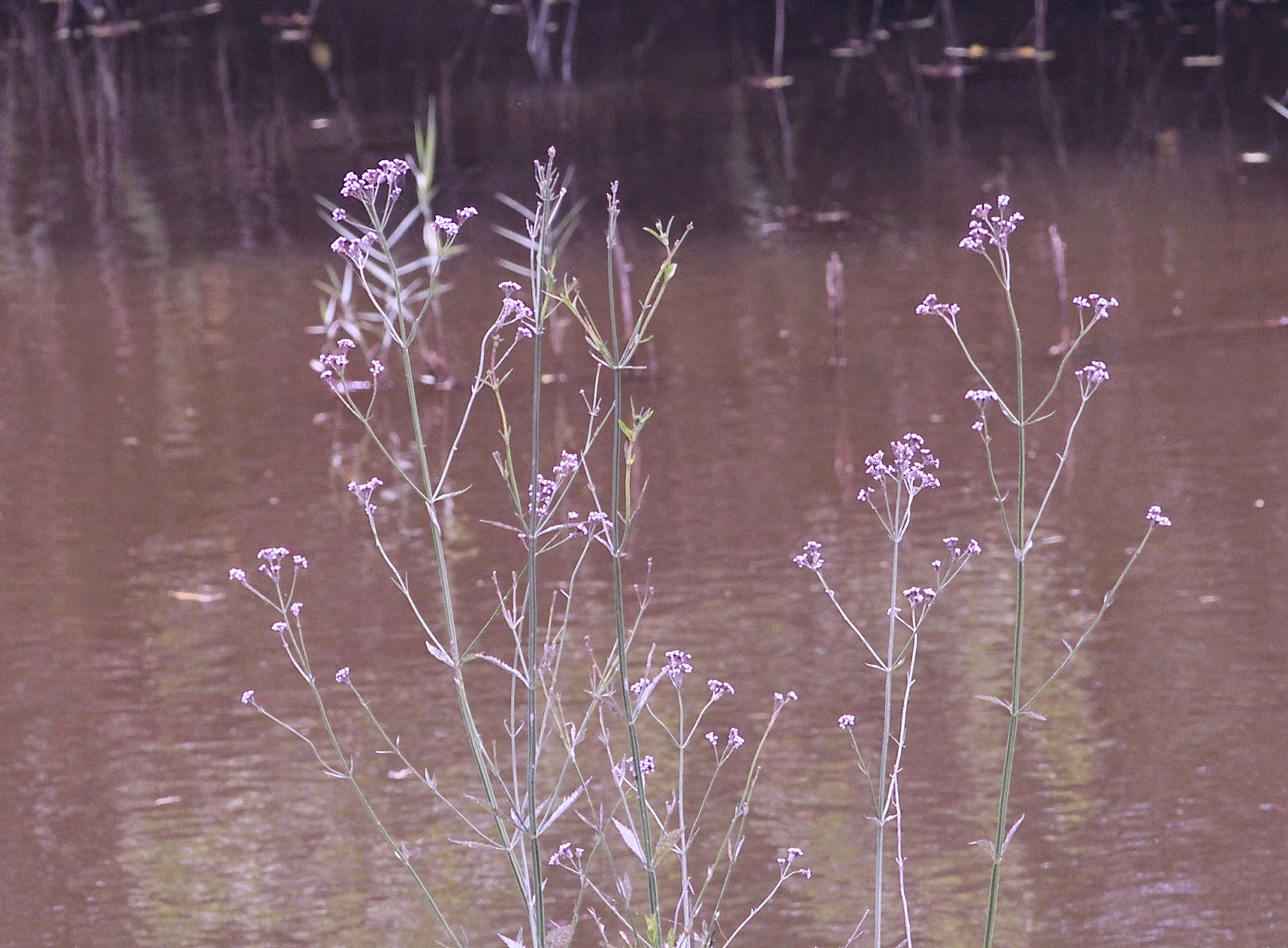 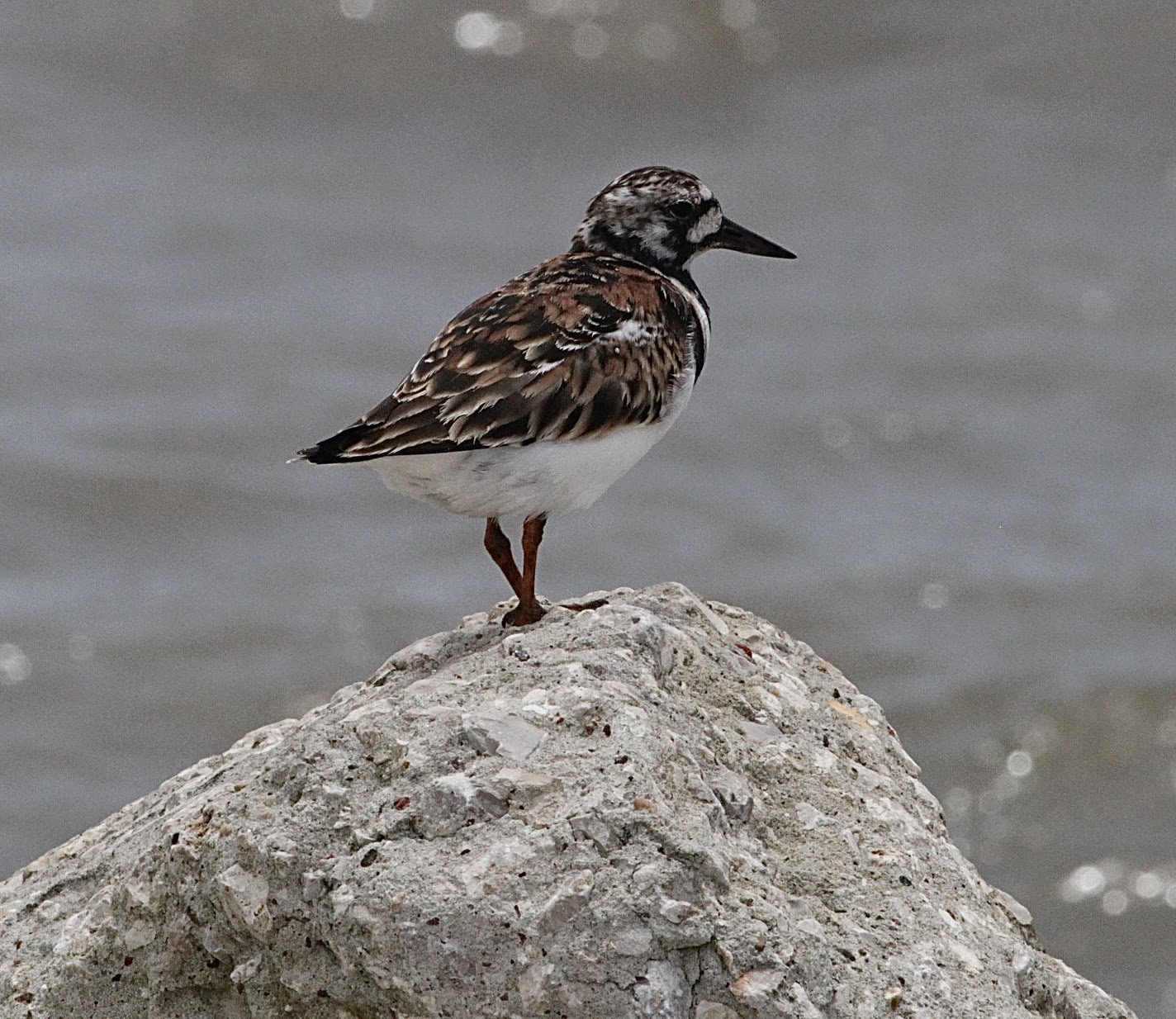 Down by the bay, it was high tide and the waters were exceptionally choppy, plus a stiff wind was blowing, all of which made pretty poor viewing conditions for shorebirds or for water birds like pelicans. I did see a small flock of Ruddy Turnstones. This handsome fellow was one of them. I saw a single remarkably colorful Willet in its breeding clothes, as well as a single Dunlin. There was also a small flock of Black-necked Stilts in flight. But there was none of the frenetic activity that prevails at low tide. 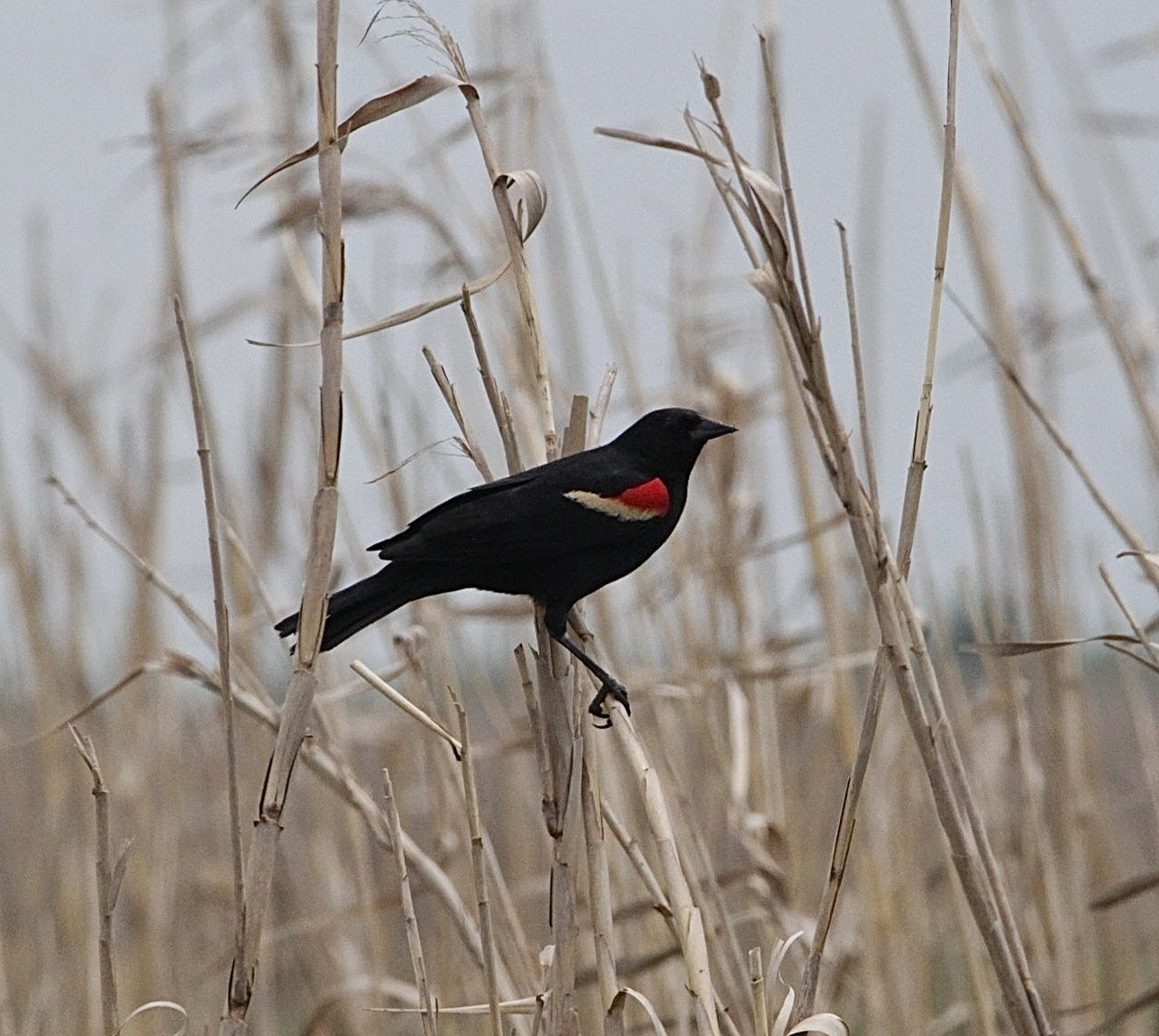 As always, members of the blackbird family were well-represented here. In addition to the aforementioned Boat-tailed and Great-tailed Grackles, there were, of course, plenty of Red-winged Blackbirds like this one, as well as Brown-headed Cowbirds, Common Grackles, and Eastern Meadowlarks. And one other unexpected cousin also showed up.

As we were leaving the refuge, we stopped by the new visitor center to try out the observation deck. I swept the area with my binoculars for as far out as their lenses would take me. And...wait. What is that?

The binoculars brought me the image of two medium-sized birds in the distance. Although they were far away, I knew instantly what they were, but I was so surprised I almost couldn't believe it. I never expected to see this bird on this day. 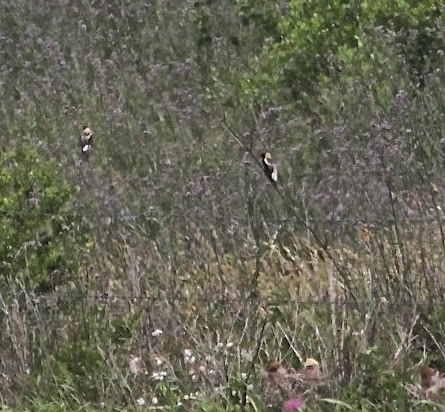 Just as with the Roseate Spoonbills, of course I had to try for a picture even though I knew the birds were too far away for my lens. But even at that distance and with my inadequate lens, they are recognizable. They are Bobolinks! Back from their long winter in South America. I've only ever seen these wonderful birds once before, in a field in upper East Texas many years ago at about this time in spring. Seeing them again certainly made my day. The long drive to and from the refuge was imminently worth it!
Anahuac National Wildlife Refuge