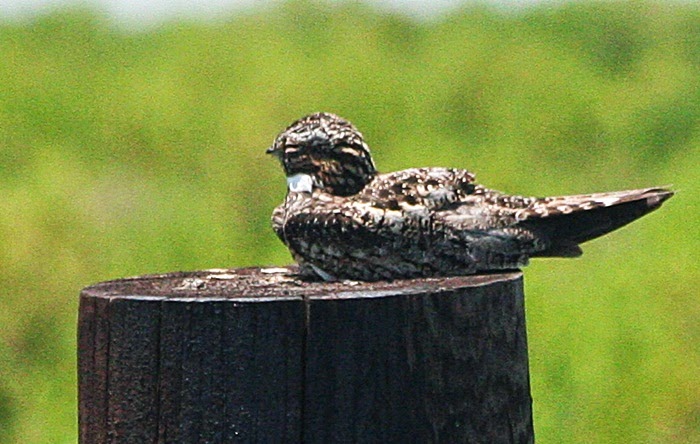 A cryptically-colored Common Nighthawk rests on top of a fence post. As a child, I knew these birds as "bullbats," so-called for the booming sound they sometimes make in their flight displays. I loved to watch them in flight on late summer afternoons. I still do.

In an important decision related to the environment this week, the Supreme Court upheld by a 6-2 vote (Justice Alito having recused himself) the Environmental Protection Agency's rule on regulating the smog that is created by pollution from coal plants.

We tend to think of cities as being something akin to wildlife deserts, but nothing could be farther from the truth. In fact, cities harbor 20% of the world's bird species.

Research has confirmed what might have seemed self-evident; namely, that birds that live in areas that have a diversity of predators tend to have shorter lifespans.

Science writer Maggie Koerth-Baker writes that there are many ways to conserve natural resources. To discover them, we just need to ask the right questions.

Recent surveys have found that populations of many boreal birds are declining in the Adirondack lowland wetlands. These include the Boreal Chickadee, Gray Jay, Rusty Blackbird, and Olive-sided Flycatcher.

The National Fish and Wildlife Service has recommended that the Ivanah solar power facility in California be shut down during peak migration periods because it has been shown to be deadly for birds, essentially incinerating those that fly too near.

Don's Jersey Birding blog writes about the Monarch butterfly and the trouble it is in and discusses what the average homeowner and gardener can do to help - basically plant milkweed. He discusses the different kinds of milkweed and the fact that it is essential to the Monarch's reproduction and survival.

The Audubon magazine writes about why the Passenger Pigeon went extinct and about the ethics of attempting to bring it back through cloning.

Another week, another toxic spill of oil that threatens a river. Truly, it seems that not a week goes by without such an incident. This time it was an oil train derailment in Lynchburg, Virginia, that sent oil into the nearby James River.

Lyme-infected ticks are a big problem for the Northeast, and now, apparently in response to the changing climate, they are becoming more prevalent in Canada.

Many people love to provide nectar feeders for hummingbirds, the better to watch the little critters, but it is possible to love the birds to death. It is absolutely essential that the feeders be kept clean and free from mold which can actually kill the hummingbirds. This is especially important as the weather heats up, causing the nectar to spoil faster.

Things have been slow on the migrant front this week. No new warblers or vireos or flycatchers were sighted. In fact, the only new migrant I've seen lately is the lone Baltimore Oriole that showed up here last weekend, and it did not tarry long.

But I have been revisited by a couple of winter visitors. One day, a lone American Goldfinch turned up at one of the feeders and another day, I saw a warbler hopping around on the ground looking for bugs and got excited thinking I was seeing something new, but on closer inspection, it proved to be a late Yellow-rumped Warbler passing through.

Last week we were entertained by the Carolina Wren family exploring our yard. They are still here, but the babies are much more independent now and beginning to find food on their own. But this week, we have a Carolina Chickadee family learning their way around the yard. We can hear the querulous little voices of the chicks throughout the day as they beg their parents for food. There are few things cuter than a tiny chickadee family!